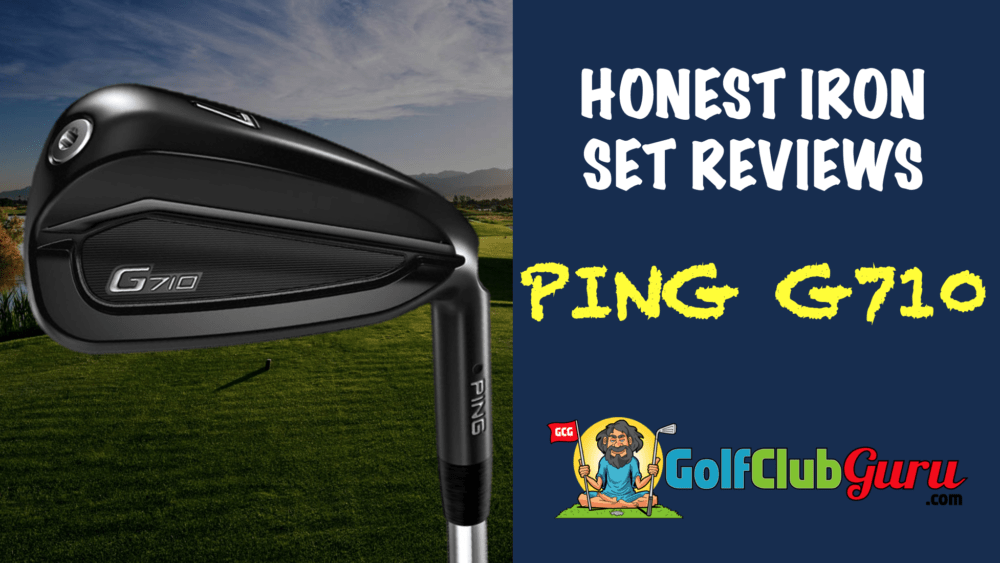 An Honest Review of the Ping G710 Iron Set

Here’s a great summary of the G710 iron set: they look like a players irons but perform like a game improvement iron – which is a very attractive combination for a wide array of golfers.

Ping irons have always been a source of confusion for us. They are cast irons – yet they feel and perform just as well as a forged set. The Ping G710 iron set is no exception. Overall, it’s a BEAUTIFUL set of irons.

Are they worth the money at this moment in time? No, but that’s just our opinion. If you have the money to buy the best sets out there, you’d have a hard time finding a better set.

Luckily, our local driving range has a full cart of the latest Ping irons, with an assortments of shafts and club heads. You could say I overstayed my welcome demoing this set to give you an honest review and enjoy my time (alone) with this sexy set of irons.

Let’s jump right into our thoughts on the Ping G710 set.

Performance: As Durable, Long, and Forgiving as Any Ping Iron Set

Distance: Ping is known, generally, for durability and forgiveness. They aren’t known for distance by any means with their irons. The G710 is looking to change that, though. I’d guess they are roughly 5 yards longer than any other Ping iron set, which is a huge improvement that can’t be continued every model release.

Forgiveness: The Ping G710 irons just flew off the face, no matter where you hit them. Miss the center of the club face by 1/2 inch? No problem… a little worse feel, but not a bad result overall.

We don’t get too technical here at Golf Club Guru, but the main improvements are due to the “Maraging Steel Face” and the placement of high-density tungsten weights, which results in faster ball speeds across the entire face.

Feel: How Ping manages to create such a great feeling/sounding iron from a cast set is beyond us. We’re glad they do, though. I will say that this set of Ping irons results in a unique sound and feel. One that I’ve never experienced before. Not good or bad… just different.

Durability: If you are looking for a set of irons to last you close to a lifetime, then Pings are the way to go. There is no question about it. I’ve passed over TONS of iron sets over the years due to wear and tear. They simply don’t last for hundreds of rounds, as the faces wear down and lose their oomph. I can’t say that I have EVER passed on a set of Ping irons due to being hit too many times. I’d imagine the Ping G710 is no exception.

Oh, you have $1,400 just hanging around ready to spend on new golf clubs? That’s nice. Me? I just spent $4 on a Ping putter at Goodwill, and I can’t help but feel the anxiety of spending more than I should have.

Anyway, if you have the money and desire to have the best equipment on the market, this set is perfect for you. If you are like me, though, you’ll need to look at alternatives. Your goal will be to find a similar performing set for a fraction of the price. My recommendation? Check out the Ping G15 iron set. They were released 11 years ago!!! Thankfully, there are plenty out on the market in good shape with lots of life left. What’s the difference between the G710 and the G15? 695, to be exact.

Actually, the real difference between the two is: a minuscule improvement in ball speed, a very different paint job, and a VASTLY different price tag. You can pick up a set of Ping G15 irons for less than $300 all day. The decision is yours: are the small improvements over the years worth the extra $1,000+?

Short Summary For Those That Don’t Read:

If you can afford the best of the best, here is it in the Ping G710 iron set. If you want to save money, pick an older Ping set. It’s that simple, really.