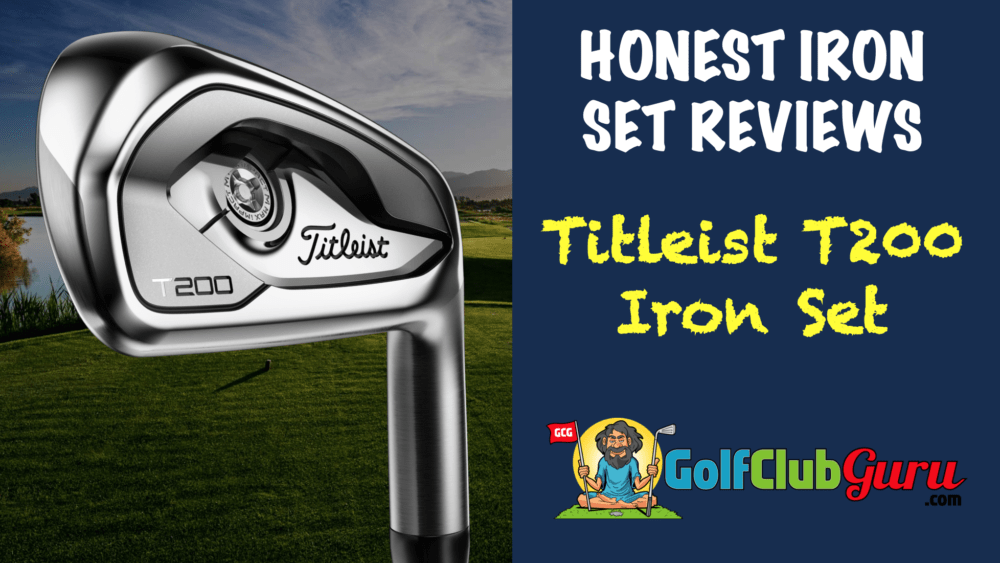 If you have read a golf club review post before, you’ve probably read about 90% BS that was copied and pasted from the club manufacturer’s site and put through a “rephrase machine.”

Here at GolfClubGuru, we try to be a little different. We only post things that we think will help you as a reader. We don’t use technology mumbo-jumbo… we leave that for the club manufacturer trying to convince you to buy their clubs that are the same as last years models but with a different paint job for $1,000.

Anyway, let’s get to our review of the Titleist T200 iron set. I got to hit the T series irons last weekend – great series of clubs to replace the old AP series. If it’s in the budget, you can definitely find the best set for your game.

Compared to the predecessor AP3 set, the Titleist T200 irons have thinner toplines and less offset. If you’ve read any of my articles, you probably know that I’m all about thin toplines and little offset on a set of irons.

However, this look can be a little intimidating to mid to high handicaps. Other than that, the only other differences from the previous AP3 set are different paint jobs and a small change in weight placement on the club head.

If you take a look at the clubhead, you’ll notice that there is more weight towards the toe and heel of the club, as opposed to directly behind the sweet spot. Moving the weight to the sides of the club head will help stabilize the club head through impact, reducing the amount of twisting during the most critical part of the golf swing.

Twisting is the most costly on off center hits. As a result of the weight placement, this club is relatively forgiving for a players iron. Not a forgiving as the T300 of course, but forgiving nonetheless.

The distance control of this set is incredible. I was hitting 7 irons consistently 180 yards when struck well, which is a few yards further than my current gamers (Mizuno JPX 825 Pro).

I’ll admit I wasn’t exactly on my game the entire time that I reviewed the Titleist T200 irons. I hit a few shots off the toe and a few shots off the heel, which didn’t end up playable at all. My mishits were penalized pretty badly, which can be a good thing or bad thing depending on how you look at it.

Overall, I really liked the feel of the T200 irons at impact. They have a forged face. I expected to notice a drop in feel as the entire club head isn’t forged like my current set, but the forged face was plenty for a great overall feel.

Although the price isn’t insane like a few other brands and their $1,400 sets, we can’t accept a $1,000 price tag on anything. We are big fans of recommend entire sets of premium name brand clubs for less than $500. That’s possible by buying 3+ old clubs (that were highly rated) in slightly used condition.

As a result, we’d recommend an alternative that will perform practically just as well as the T300, and at a much better price. The alternative? The AP2 series. Sure the design and paint job have changed slightly, but the results are pretty much the same. They are both great players irons. The difference in a performance between the two sets would be extremely minimal, while the price difference is substantial.

We’d recommend the 714 or 716 series AP2 irons. They’ve been out for 4-6 years & there are lots of great priced, slightly used options on the market today.