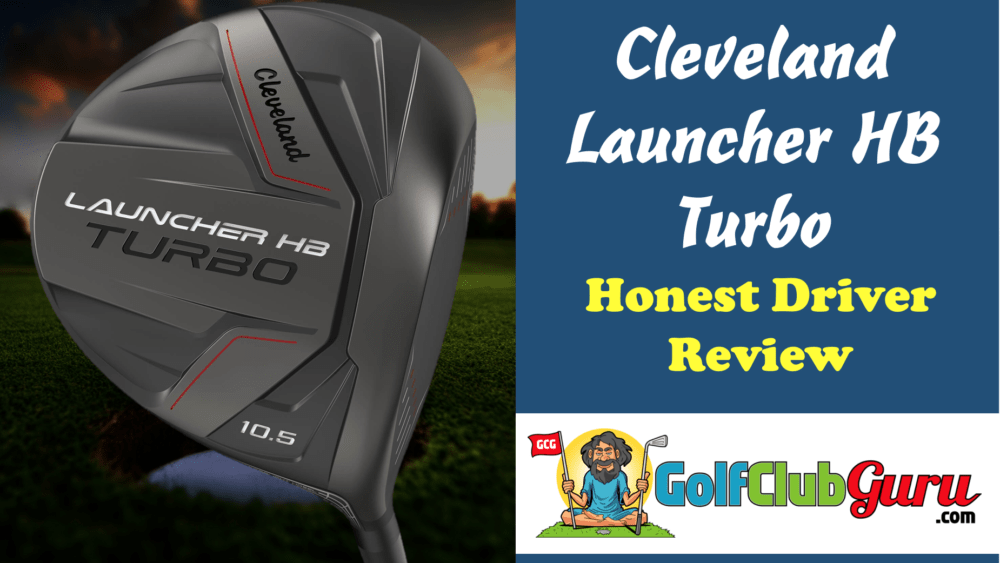 An Honest Review of the Cleveland HB Launcher Driver

If you are looking for a steal in the driver category check out the Cleveland Launcher HB driver released in 2017.  The original retail price was only $299 and consistently performed well against other competitors.  In 2019, Cleveland launched the next generation Launcher HB Turbo driver.   Let’s take a look at Cleveland’s latest driver entry.

First glance of the Cleveland Launcher HB Turbo you notice the club head is glued, therefore, no adjustments are available.  The flat black color scheme, sole and weight on the sole appears similar to the Ping G410.

The top front of the crown resembles the appearance of recent TaylorMade drivers while the back of the crown features what looks like the turbulators found on the recent Ping drivers.  The crown of the driver appears aerodynamically designed for speed.

The white and red groove lines highlight the outer edges of the club face while the middle is flat without grooves.  The sole again is reminiscent of the Ping with red trim lines and aerodynamically shaped weight perpendicular from the face.

In addition, there is a channel cut from behind the club face.  The clubhead frames the ball at address and looks solid with plenty of technology visible.

I hit a few shots with my driver, 12* Callaway Epic Flash with Blue Tensie stiff ($549.99 retail), to establish a baseline.  I know my best hits reach around 260 yards carry distance.

The first few swings were accidently with the 10.5* regular flex.  The first swing actually startled me, contact sounded like a gunshot, it was extremely loud and the sound echoed.  Definitely one of the loudest drivers on the market.  The results were fantastic.

I included the first few unintended swings (10.5 reg) because results were so unexpected.  Ball speed equaled my personal driver while launching slightly lower.  The carry distance was fantastic, the Launcher is loud and travels far.  Shots also traveled very straight with minimal side spin.  Balls typically rolled out another 25-30 yards, so my overall distance exceeded 280 yards.

Then I looked at the club face and realized I hit a few shots with the wrong club, I meant to test the 9* Launcher with Miyazaki stiff shaft.  I was already impressed.

Switching to the 9* continued to yield favorable results.  Launch angle was 12.2* and achieved a maximum 153 ball speed, the fastest ball speed of any driver I tested, including my own driver.  Backspin remained very low at 1986 RPM and 288 RPM side spin.  Shots traveled very straight with a slight draw.  If I could have launched a little higher with the same backspin I would pick up additional carry distance. Probably a 10.5* stiff would be a slightly more optimal match for my swing.

The Launcher HB Turbo is available in 9*, 10.5*, 10.5* Draw and 12* lofts.  The 10.5* Draw is a great option for the players who struggle with an unwanted fade or slice.  Left handers might be disappointed, it’s only available in the 10.5* option.  Head size is the standard 460cc with a D3 swing weight.  The stock shaft is lightweight Miyazaki C. Kua 50 gram shaft available in lite flex through stiff.  If you need an X-Stiff you might need to look at a custom shaft option or even look at parent company Srixon, which offers several shaft options in the z585 or z785 drivers.  The stock grip is Lamkin 360.

We can’t justify buying the latest releases. Instead, we like to buy better value golf clubs that were released 2-5 years ago. They are far more affordable, and the difference in performance is negligible at best.

Cleveland Golf might just be the most underrated company in the golf industry.  They are consistently overshadowed by the bigger companies like Callaway and Taylormade, however, Cleveland continues to develop products that equal their competitors at a fraction of the price.

The Cleveland HB Launcher Turbo driver retails at $349.99, a full $200 less than some of the other current top rated drivers.  Launcher Turbo driver does not offer any adjustments and still performed comparable to my own driver.  The club performs great with the stock shaft and is a great option for someone on a budget or that truly sees the combination of value and performance.  The Launcher HB Turbo might just be the best value driver available.