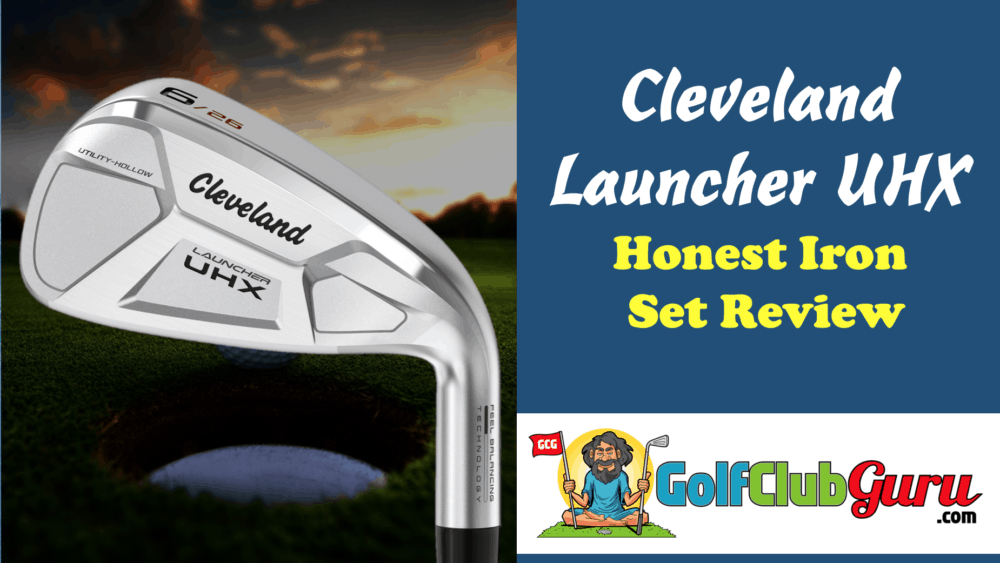 Cleveland entered the hollowed out iron market with fellow competitors, TaylorMade P790, Ping i500, Cobra Forged Tec just to name a few.  The Cleveland Launcher UHX irons are meant to provide distance, precision and forgiveness with hollow long irons cavity back short irons.  The UHX irons stole a page from parent company Srixon with their popular driving iron design.  In fact, the Srixon U85 utility iron is instrumental in the design of UHX.

Cleveland did a great job in the appearance of the Launcher UHX irons.  The light chrome color looks good while the thicker top line and sole offer plenty of confidence at address.  The top line and sole is almost identical in size to the King Forged Tec, TaylorMade P790 and a little thicker than Ping i500.  In addition, the V-Shaped Sole looks really easy to hit to hit chips or full swings from any lie.  UHX offers a milled face through the hitting area, however, it does not extend on the toe and heel similar to the CBX2 wedges.  The set transitions nice from 4-iron to wedges, the cavity back is subtle enough you barely notice until you look close.

The Cleveland Launcher UHX irons are available in 20* 4 Iron through 50* D (Gap) Wedge.  Gapping starts at 3 degrees between the long irons and extends to 5 degrees in the wedges.   Standard length is 37” and 63* lie angle in the 7-iron.  The swing weight is D2 with the stock steel shaft and D1 with stock graphite shaft.  The D Wedge weighs one swing point more in both steel and graphite.  UHX irons are available in both right and left-handed.  Dynamic Gold DST98 is the stock steel shaft while Mizayaki C. Kua 60 is the stock graphite shaft.

Cleveland also offers a UHX Utility iron available in 18* 3, 20* 4 and 23* 5 iron.  The Utility iron option offers a stock D4 swing weight with an upgraded UST Recoil 95 shaft.  The UHX Utility is available in right-handed with all three options and left-handed in the 4 and 5 Utility option.  Standard retail price is slightly higher at $169.99.

The Cleveland Launcher UHX irons were tested with the stock Dynamic Gold 98dst in stiff flex on a Foresight GC2 and TaylorMade TP5 golf ball.  For comparison purposes, Cleveland UHX irons are grouped with TaylorMade P790, Cobra Forged Tec and Ping i500 with standard specs.

UHX exceeded expectations and is a great option for someone looking for distance and control.  Technology in the clubs helps create some of the fastest ball speeds found in irons.  UHX irons are easy to hit and still forgiving on a few heel and toe hits.

Impact felt softer than expected across the entire face, including off-center hits on the toe and heel.  Ball flight felt a little high and peak height is higher than the other irons in the testing category.  However, the higher flight promotes the ball to stop quickly at such a steep descent angle.

Ball flight almost felt like a rainbow.  Personally, I felt there was still more in the tank with the UHX and I wasn’t getting everything out of it.  The stock shaft performed good, however, I switched out the stock Dynamic Gold 98 gram shaft for a heavier Nippon Modus 120 stiff in an effort to bring down ball flight.

Contact was good, yet ball speed dropped dramatically with heavier shaft.  Finally, I switched to a lightweight Nippon Modus 105 stiff and found peak height dropped and hit the fastest ball speed of the day reaching 122.4.

In comparison, the fastest ball speed of a non-Cleveland iron was 118.  My only hesitation is the difference I received in carry distance from one swing to the next, however, that is probably the result of not consistent enough swings.

Cleveland has released multiple underrated, underpriced irons sets in the past 5 years. One example would be the Cleveland CBX Launcher irons. Very forgiving set with great feel and distance control, just like the Cleveland Launcher UHX irons. It’s not a hollowed out set, but the performance is practically the same, at a fraction of the price.

Cleveland designed probably one of the best bargains with a high-performance and lower price point in the Launcher UHX irons.  While hollow body iron competitors max out at $1400 for 8-irons in steel, the UHX is a steal at $914.24 in steel and $1028.56 in graphite.  Anyone looking at a new set of the hollowed out irons should at the very least make a few swings with the UHX.  The iron looks and feels great and offers the fastest ball speed and solid distance of the irons tested.