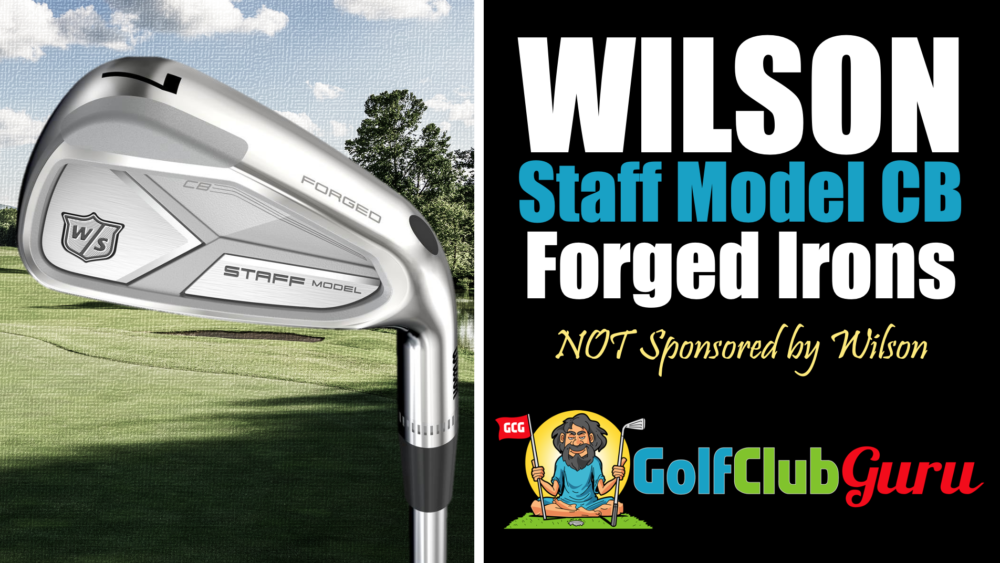 Wilson, without a doubt, makes some of the best value forged irons on the market. While other brands have to cover their hefty advertising costs via crazy expensive club prices, Wilson is able to offer great clubs at a fair price.

Although Wilson doesn’t have a strong Tour presence, that doesn’t take away from the quality of their blades and players irons. Wilson has been making great forged irons for decades. Just because they have fallen from the #1 golf equipment brand in the world, their forged club quality has never taken a hit.

The Wilson Staff Model CB irons have very little offset and relatively thin toplines. Overall, it leads to a very aesthetic set of irons, but without the razor thin profile that you might see in blades. It’s a great compromise of appearance, performance, and forgiveness if you are a mid to low handicap golfer that doesn’t quite see the need to game a set of unforgiving blades.

The main difference between the Wilson Staff Model CB irons and Wilson’s other players irons? The center of gravity is actually centeted now, due to the heel positioned tungsten weight that you can see on the club head.

Their other players irons have a center of gravity that is centered closer to the heel of the club head. This change results in a iron set that is very slightly more fade-biased than previous model. Keep in mind this is a very minor, typically unnoticable change, though.

Performance-wise, it’s hard to get much better than this. The clubs felt and sounded incredible at impact, and my distance control was 100% on fire when I tried the Wilson Staff Model CB irons out. While it’s hard to dial in distances with other clubs that focus on distance and forgiveness, it was a breeze with this set.

My 7 iron was going about 170 irons on the dot shot after shot. I typically hit my 7 iron around 175-180 yards with my current set, which is stronger lofted than this set by a couple of degrees. I really like the average lofts of these clubs, as they are not strengthened to make you think you are hitting the ball further (an ego boost).

The Wilson Staff Model CB irons are very forgiving when compared to other players irons. However, if forgiveness is what you are after, then I’d encourage you to look at a set of game improvement irons instead.

These clubs shine in distance control, workability, feedback, and great feel/sound at impact. That’s what sets them apart, and that’s what most low handicap golfers are after to further improve their ball striking. If you want to become a better ball striker quickly without getting a set of blades, this is the set for you.

Who Should Buy the Wilson Staff Model CB Irons

The Wilson Staff Model CB Forged irons are meant for golfers that want the best of three worlds: the look of a blade (almost), the forgiveness of a game improvement iron (almost), and a great price.

Lots of golfers want to play blades, but know that their ball striking isn’t quite there yet. This iron set is targeted towards this group.

The “price” is where this gets a little tricky, though. If you want a brand new set of irons, then this will probably be a great option for you, as you’ll have a hard time finding a better price on brand new clubs. However, if you want to save money and buy used, then I’d recommend backing up a few years to get the best deal possible. Read more in the next section if you are interested!

If $1,000 is more than you want to spend on a set of irons, you have some more options. I’m always looking for a great alternative that won’t force to you sacrifice quality.

There are two great options that I’d recommend here.

If you want the best value players irons, you can’t go wrong with either of these two iron sets!

Thanks so much for reading my honest review of the Wilson Staff Model CB irons. Please leave a comment below if you have any questions, concerns, or comments!