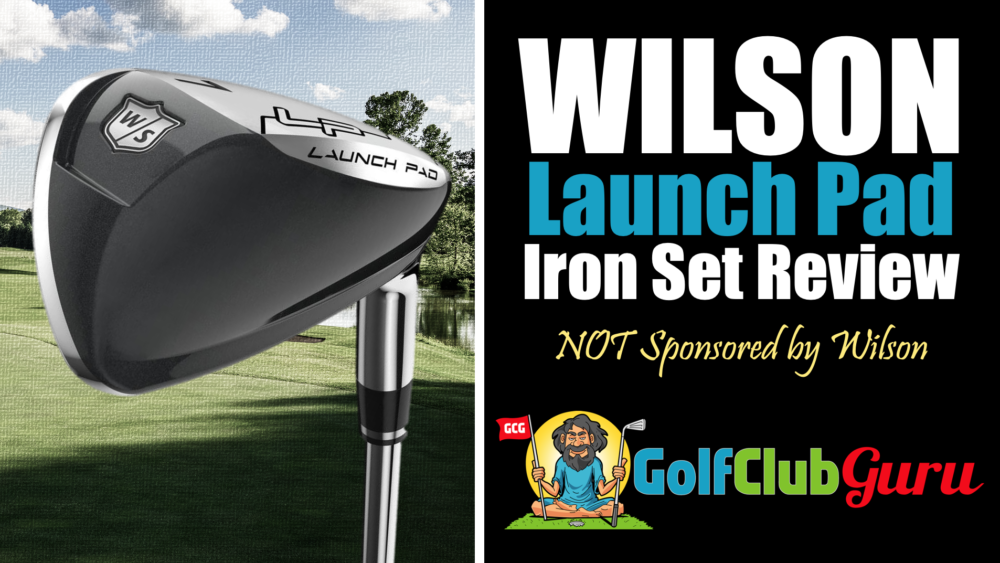 The Wilson Launch Pad irons are just about as forgiving as you can get.

These hybrid-style irons are a great option for budget-conscious golfers that want as much help as they can get with their ballstriking.

Wilson golf clubs have seen a pretty steady decline in sales even since the 80’s. While they are trying to change that with some high quality iron releases (like the Wilson D7 Forged irons), they also wanted to release an option for beginners and higher handicap golfers.

Keep in mind that Wilson doesn’t advertise their clubs like Callaway and Taylormade does. So just because you haven’t heard or seen Wilson clubs as much as other brands, that doesn’t mean they are lower quality clubs. In fact, I’d wager that Wilson really makes better performing clubs for higher handicap golfers, as the focus is on a forgiving, high launching, and lightweight design.

Sorry for a long introduction. Google likes stuff like this I hear. Here’s my honest review of the Wilson Launch Pad irons, which is in NO WAY sponsored by Wilson.

If you want a compact, sleek design, then you came to the wrong place. These are some of the largest profile irons that you can buy, which are often referred to as “hybrid-style” irons. The longer the iron, the larger the club head. The shorter the iron, the smaller the club head. That allows the longer irons to be far more forgiving, which is where most golfers struggle anyway.

The club heads are large in every direction possible. Large toplines. Wide club soles to bounce off the ground easier at impact. Tons of perimeter weighting to increase the sweet spot. Wide and tall club faces to increase the margin of error and allow your mishits to still fly relatively straight and far.

The perimeter weighting is focused low and far back no the club heads, which ensures a very low center of gravity design. This design is why the clubs are so forgiving and high-launching.

As I mentioned earlier, the Wilson Launch Pad irons are meant to be as forgiving and high launching as humanly possible. And that is absolutely the case. When I got a chance to try out these irons, I was blown away by just how high I was able to hit the ball, even on my mishits.

With such large soles, it’ll be nearly impossible for the clubs to dig into the ground. No matter how steep your swing is, the soles will bounce off the ground instead of digging into it like other clubs would.

However, the clubs lack in lots of different areas. This was fully expected, because no iron can excel in every category. The Launch Pad irons were very hard to hit low. The ball flights were just way too high for my liking. On a similar note, I had a hard time hitting draws and fades on command, which is a big part of my game (makes it more fun in my opinion).

Don’t expect much when it comes to distance control, either. With such large club faces, you are bound to hit the same club up to 10-15 yards further than average at any given time. However, that’s the drawback when it comes to chunky, forgiving irons in general. It’s no different with other hybrid-style irons.

The Good and Bad

Who The Wilson Launch Pad Irons Are Best For

The Wilson Launch Pad Irons are great for seniors (or those with slow swing speeds in general) who struggle with ballstriking. Even more so if you struggle with digging your golf clubs into the ground at impact. And lastly, if you are considering adding multiple hybrids to your bag, then you might as well game a set like this that perfectly blends with hybrid clubs.

I don’t think this is a great set for the majority of younger or middle aged golfers, as they have plenty of time to increase their swing speed and improve their iron game. Seniors may just want a super forgiving iron set that they’ll never need to upgrade from.

The Wilson Launch Pad irons already offer a great value compared to other brand new clubs on the market. However, if you want the best value possible, then you’ll have to go with an older model from a different brand.

In my opinion, Cleveland Hi-Bore hybrid iron set is the best bang for your buck when it comes to the most forgiving irons that you can buy. Cleveland has released many popular hybrid-style iron sets like this – all with wonderful reviews.

The Wilson Launch Pad irons are $700, but you can pick up a slightly used set of Cleveland HiBore hybrid/irons for around $250 in solid condition.