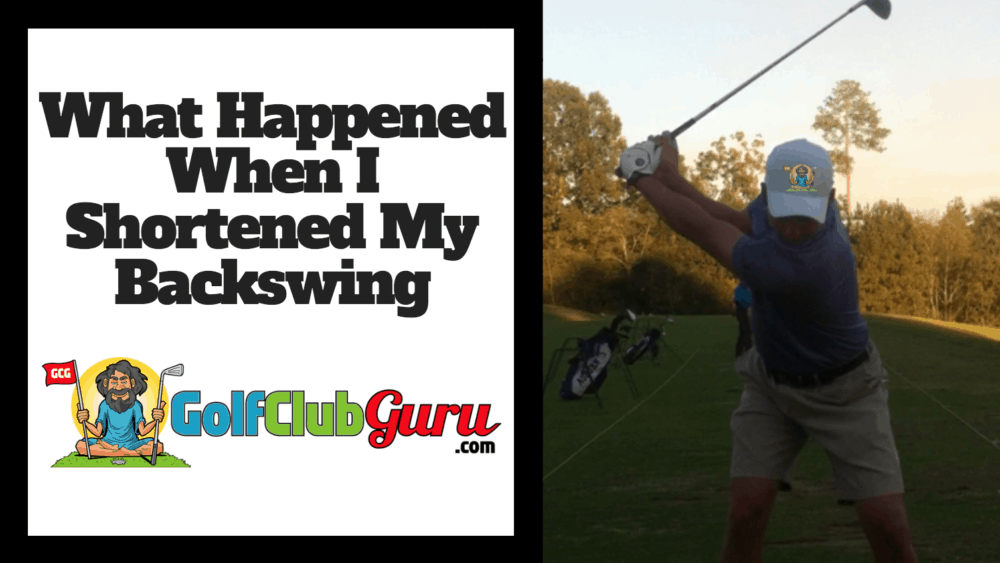 What Happened When I Shortened My Backswing

After my years of videoing my swing daily and practicing with any free time that I found, I decided to shorten my golf swing. Keep in mind I was roughly a 5 handicap at this time. But I was tired of seeing the club at parallel or longer, and I wanted more consistency in my game. I heard about all of the benefits that would come with a more compact golf swing, and I was convinced that this was the key to becoming a better ball striker. After all, less things can go wrong with a shorter swing, right?

Well, not exactly. If done the right way, yes… you will surely become more consistent and strike the ball better on average. You won’t lose distance, and you will be a much better golfer in general. If done the wrong way, though, which is very easy to do, you will be in even a worse situation than someone with the longest swing of all time.

How NOT to Shorten Your Backswing: A Story Experienced and Written by Me

Man, I wish I could tell you how excited I was to go to the range the next day. I had the idea of a shorter swing in my head, and I was prepared to start Monday qualifying for PGA tour events the next week. It was nighttime, so I had a club in my hand in the backyard making the shortest backswings possible. Bugs were eating me alive, so I went to the covered patio with the low roof. I remembered Allen Doyle learning to swing under a low ceiling; I knew I was in good company. Why didn’t I do this earlier??

“Shorter Backswing = less things that can go wrong,” I thought. “I’m going to accelerate so much more now. Less wasted motion. More consistency. Better ball striking. You can all call me Moe Norman Jr. Most compact swing of all time. I won’t miss the center of the club face ever again.”

Dang, if only I know what I was about to do to my swing.

The next day, I went to the range and set up my camera. “Just swing like a 3/4 backswing,” I thought to myself. Did a few swings. Hit a few balls. Checked the video. Hardly a difference. Dang. Let’s keep at it. “Just swing like a 1/2 backswing”. Swing a few swings. Hit a few shots. Check the video. A small difference. Hmm, I really thought it would look different.

This kept going, until I was at (what felt like) a 1/4 backswing. Checked the video. BINGO! Hello PGA Tour, hello Masters Champ, hello greatest golfer on earth. I’ve done it. I’ve made it. I’ve shortened my backswing well short of parallel, and I’m ready to hit every green in regulation for the rest of my life.

Note: this is obviously a little exaggerated. I knew it was going to be a process, as I had made many swing changes in the past that took multiple months and thousands of dedicated reps of practice and exaggeration. I’m going to continue with my story telling though.

Here’s the problem. I honest to god felt like I was starting my downswing no later than .1 second after I took the club away. I had the shortest and weakest shoulder turn of all time. My swing was as wristy as ever. My tempo sucked. Although I honestly didn’t lose much distance on my well struck shots (surprisingly), my consistency was garbage. Well struck shots were few and far between. On average, I couldn’t get into as solid of an impact position as I wanted to. Why I thought THIS was going to lead to consistency is beyond me today. Nevertheless, this is what young me thought and experienced.

I kept with it for months, I kid you not. I would video my swing nearly everyday, checking to see how compact I could swing. If the club was much past vertical (as in half way back), I would work on keeping it even shorter. I wanted the shortest swing of all time, and I was dedicated to making it happen. After months of practicing and getting tired of my terrible results, I finally got a PGA pro’s opinion. He quickly pointed out my lack of a full shoulder turn. He told me my swing has never looked so wrist and arm dominated. He noticed my shoulder plane was garbage as well, when it used to be perfectly perpendicular to my spine angle.

He was actually a big fan of a shorter backswing as well, so we started working on a better way to do it.

How to Correctly Shorten Your Golf Swing (Attempt #2)

Instead of focusing on simply taking the club back 1/4 of the way before starting my downswing, we started working on focusing on my shoulder turn more. No more focusing on how far back my arms went, or how far back my club went. We focused on turning the shoulders fully and at the correct angle. When I was done with my full shoulder turn, my backswing was done. Simple as that. No more having my arms keep going back.

It’s very common for golfers to keep their arms moving in the backswing, even after the shoulder turn is complete. I was originally one of those guys. How did I try to fix that at first? By shortening my swing as much as possible in any way possible. How SHOULD I have fixed that? By being more aware of the length and plane of my shoulder turn.

The new goal: the arms are going to stop swinging back AS SOON AS the shoulders stop turning. No later than that.

On top of stopping my arms when my shoulder stopped turning, I started working on a steeper shoulder turn. My coach mentioned that many players with swings that I am trying to emulate have steeper shoulder turns. It keeps them more centered and encourages a slightly shorter backswing and a better impact position. It’s much easier to overswing when you have a flatter shoulder turn.

So off I went practicing the 2 new changes:

I stopped videoing my swing for a month, per my coach’s request. Thousands and thousands of balls later, I started hitting the ball consistently again. I decided to video my swing. Deep down, I was petrified of what I might see. I imagined my swing was probably back to past parallel again. Or maybe I was way off plane. Clearly, I had not gone without videoing my swing for more than a couple of days previous to this.

The video shocked me, in the best way possible. My swing was decently short of parallel, my tempo was 100% improved, and I was perfectly on the plane that I wanted to be on (I prefer a steep backswing, shallow downswing personally).

And that, my friends, is how to and how NOT to shorten your backswing.

Another note: there are many reasons why you might be swinging the club too far back. It might be because or too loose wrists, or the arms not stopping soon enough (me), or a number of different reasons. I recommend you find a PGA pro and take some lessons to determine the priorities for improving your golf swing. One change might fix a multitude of problems in your swing. The best teaching pro will notice and fix that #1 priority problem sooner than a crappy pro. I was lucky enough to find a chill and knowledgable instructor that could prioritize and teach the golf swing in very simple terms.

Yet another note: The Golf Swing Extender is the absolute best training aid that you can use to shorten your golf swing. It will keep your trail arm more extended (hence the name), which makes it very difficult to swing the club back too far. Typically, the straighter your trail right arm is, the more compact your golf swing is. I do get a percentage of everything that you buy, so I really do appreciate you using my link!

I hope you enjoyed. Let me know about your attempts to shorten your golf swing below!