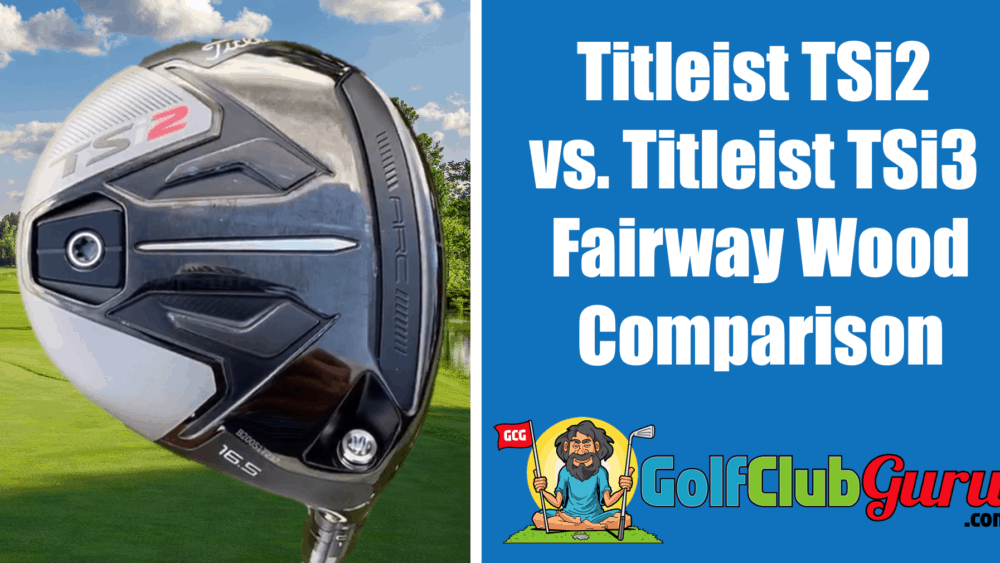 A fairway wood is an integral club to have in your bag. However, with so many out there on the market it can make it tough to choose which one to add to your set. It becomes even harder when the same brand produces various high-quality fairway woods as is the case with Titleist. So, to help you out, we plan on focusing on just comparing two versions, the Titleist TSi3 fairway wood and Titleist TSi2 fairway wood.

To be clear, the TSi2 and TSi3 fairway woods are unreleased for the public at the moment. They are Tour-only products at the time of this writing, but I’m sure they will be released to the public soon.

The main difference is the TSi2 has a fixed weight in the rear of the sole. The TSi3, on the other hand, has a sliding weight, which is the FIRST time that Titleist has introduced this in a fairway wood.

Another difference is, like the previous TS series from Titleist, the TSi2 is constructed with a slightly smaller, modern (rounded) shape, while the TSi3 has a more traditional, larger shape (pear-shaped).

There are obviously some similarities between the two. “TSi” is printed on the crowns of both fairway woods. The color of the crown is the same (black). They both have SureFit hosels to adjust loft and lie increments.

Based on Ian Poulter’s post, it looks like the stock loft may come out at 16.5 degrees, instead of the standard 15 degrees. In our opinion, most people would benefit from a 4 wood over a 3 wood anyway. A little more loft = a little more forgiveness = a little better performance for the average golfer without a loss of distance.

You can see “ARC” on the black bar right behind the clubface, when looking at the sole of the club. This stands for Active Recoil Channel. Like the previous TS models, this is to increase ball speeds at impact. Simple as that.

As with any club from Titleist, you have something that just looks like it means business, and this applies to either model in our comparison. However, the base of each club is different in its design, and it’s due to the technology included in the club heads.

From the outset, it appears that the TSi3 head is significantly larger than its counterpart. This bulky nature is then going to come with some forward weight that can be adjusted. This is in contrast to the TSi2 which has rear adjusted weight balance while the entire frame of the TSi2 is more elongated and lighter in appearance.

Overall, the two fairway woods do look significantly different, but then it’s the performance aspect that will better explain why there are these differences.

Listen, it’s hard to tell how these fairway woods will perform with YOUR game. We can make some rough generalizations though. The TSI2 will be slightly more forgiving and higher launch, due to the low/back weight design. The TSI3 will be great for better golfers with faster swing speeds, as they can better adjust their spin levels as needed, using the SureFit hosel and the sliding weight on the sole.

So, here’s the important part, how does the TSi3 and TSi2 compare when it comes their actual performance?

In the case of the TSi2, it has a lighter head than the TSi3. Actually, in the case of the TSi3 version, it’s clear that Titleist have had to work at producing a more compact head by shaving off aspects to then bring the mass of the club head back into the sole of the club head. The intention here is to provide more control and to reduce the amount of spin generated. Ultimately, the 3 model is all about getting distance and a more true line, which is something that can be lacking in various fairway woods.

Also, it’s expected that the 3 version is going to be less forgiving with slight mishits than the 2. At the same time, the front weight loading and reduced spin is capable of pushing the ball that bit farther. As long as you already know how to keep control of your swing and that all-important point of connection, then this should never be much of an issue.

Going back to the 2 version, the face is slightly larger than the 3. Also, when you combine the weight distribution along with the lighter head, then what you get is a club that is going to strike the ball at a greater speed than the 3. However, thanks to the larger face, the sweet spot is also going to be that bit larger as well helping to pull the shot more together and fire the ball down the fairway rather than pulling it wide.

One final point regarding the larger face. It does also mean mishits will come off at a greater speed than before. While this may initially sound bad, that weight in the sole will partly correct the mishit meaning it’s not going to be as big a disaster as you thought.

But, there are some similarities in both models. For example, they both come with ARC built into the head. For those not in the know, this stands for Active Recoil Channel, and it ultimately means that the entire clubface, so we are talking about both crown and sole, is able to deflect at the moment of impact.

What this then leads to is the development of a higher speed as the ball leaves the face of the club. Those fairway woods that don’t have this are more rigid in their form. It also leads to a higher degree of spin in a shot, whereas both the TSi3 and TSi2 produce low spin.

Who are They For?

The one thing that comes across loud and clear is that both of these fairway woods are aimed at a certain section of the market. Better golfers that want the highest quality clubs. If you want forgiveness, go with Callaway woods. If you want prestige, go with Titleist.

The TSI2 will be a great choice for those that want a less adjustable option that is slightly more forgiving on mishits. The TSI3 will be better for faster swingers and lower handicaps that want to tinker with the adjustability more than the average golfer.

In saying that, they do provide a clear amount of control even if they are not the most forgiving of fairway woods out there. For that reason, we recommend those starting out in their golfing journey to give them a PASS, but if you are more experienced and have no real issues with hitting the fairway on a regular basis, then either of these woods could be a good solution.

Both the TSi3 and TSi2 aren’t the cheapest of fairway woods around, so if you want to save some cash and still get the same kind of results, then what are your options? Thankfully, there are several out there, and we have a couple of options that we think you should pay close attention to.

First, if you want to stick with Titleist, then here’s a tip. Go for something from the TS range. It turns out that Titleist, partly because of the launch of the Tsi range, have heavily discounted the TS range. The differences between the two ranges are often quite subtle, and yet you can expect north of $150 to be knocked off a brand new set.

Also, if you want to get more money off, then look at Titleist fairway woods from around 2015. The 915 series of Titleist golf clubs was super popular. Of course, the 917 series from 2017 was too, but 915 offers better value in my opinion. You can pick up a solid 915F fairway wood for around $80.

While it’s clear that the Titleist TSi3 and TSi2 fairway woods are high-quality fairway woods, they are a bit on the pricey side for a lot of people. That makes sense, as they are a new release and there is lots of hype around them. As a result, we recommend being patient and going with our alternative options to save yourself some cash while not giving up on the different technological advances. You can always pick up the TSI fairway woods in a few years for a huge discount.

So, what do you think about the new Titleist TSi3 and 2 models? Have you paid attention to what the professionals have been saying about these new models? Which one out of the two would you go for? Let us know below.