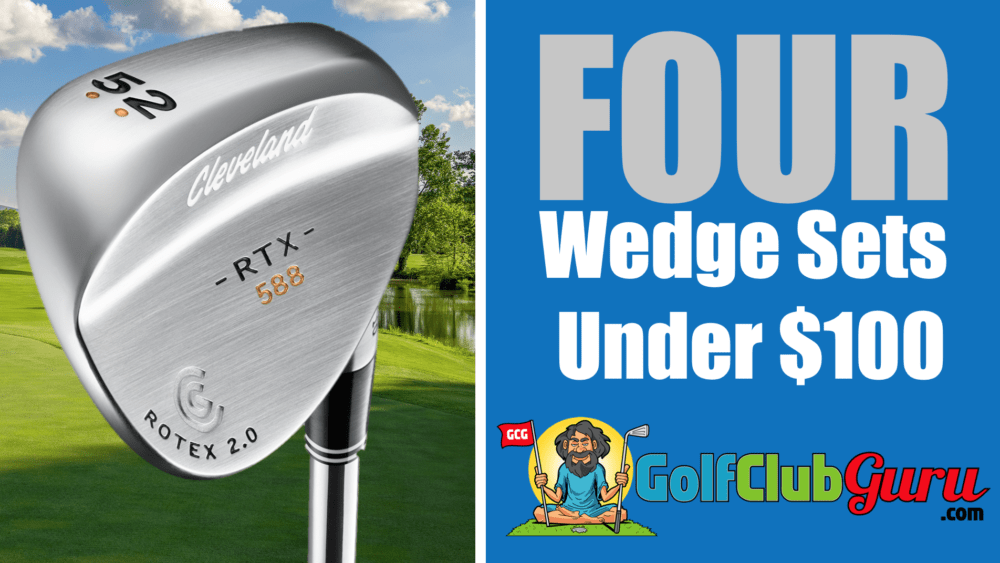 Having quality wedges should be viewed as a key investment for any golfer of any level. However, don’t be fooled into thinking that this has to equate to you spending a fortune to get something that is even just half-respectable. Instead, we are about to show you that it’s possible to buy a set of good wedges for less than $100.

To simplify things, let’s assume that you are looking for two wedges (50 and 58 degree, for example). I’ll make this article easy for you, by summing it up as follows: Stick with Cleveland & Titleist, but go for their older models instead of their brand new releases. Find them in like new (but still used) condition for the best value when all things are considered.

Other brands make some great wedges as well, don’t get me wrong. But you simply can’t go wrong with older model Cleveland or Titleist wedges.

Of course, there are numerous sets out there that fall into this price bracket, but you don’t want to simply purchase an off-brand set of wedges that’s going to do nothing for your game. The heads would probably break off, and the spin would be far less than a higher quality brand.

So, we have thrown those off-brand wedges to one side and focused on wedges that will help cut a few shots off a round and have you landing closer to the hole. Thankfully, there are a whole host of them on the market that don’t cost a fortune.

But, in saying that, there are still several things to look out for when it comes to the appearance of these wedges as it will have an impact on how they perform.

To start it off, we recommend the Cleveland 588 RTX 2.0. It’s simply a great set of wedges at a great price. They’ve released many models since the RTX 2.0, but they are all obviously pricier, without an improvement in performance.

They are a great combination of price, control, forgiveness, and spin. Also, the grooves have deeper walls than other versions which does make a difference when generating spin. But if you want EVEN more forgiveness then do look at the CB version.

You can easily pick up two in great condition for under $100.

Another option is the Titleist Vokey SM4. As it has the Titleist name, you’re quite right to expect some quality, and they won’t let you down. This has been around for a few years, but we see it as being superior to the even earlier SM2 version due to the number of grooves and amount of spin it can offer.

The head of this wedge is slightly larger than other versions which means it’s even more forgiving making it ideal for those of us still trying to master our wedge game. Truthfully, I’ve always noticed a small increase in greenside spin with Vokey than I have Clevelands, but the difference is negligible.

Turning to a different brand, we have the Ping Gorge wedge and, once again, this is an older model on the market. This is a forged club that actually produces a pretty cool sound upon striking that is amazingly satisfying. While it only offers a moderate amount of spin, the size of the grooves mixed in with the overall face area provides this club with a sense of real consistency in your striking. That means it should be easier to control each shot.

As we are looking at the budget end of the market, you may not expect things to look as cool as the more expensive models, but we have one thing to say to that. Who cares?

What you are looking for here are wedges that are capable of doing the job they are intended for and nothing else. As long as they offer you a sense of control, get the ball up off the deck, and help you to get on the green, then how they look isn’t important.

Finally, there’s the Callaway Mack Daddy 2, and it’s amazing to think you can pick up Callaway clubs for this price. The club head on this model is smaller than the others we have mentioned above, but don’t rule it out just yet. Instead, this club is perfect for those that love to produce a high level of spin on these shots as it comes with deeper set grooves than most wedges. However, it does give up some of the forgiveness that you find with other wedges, so if you are completely new to the idea of wedges and still seeking to get some kind of rhythm with the shot, then this may not be the best option.

When it comes to the performance of these wedges, then why shouldn’t we expect them to produce the same kind of impact as those wedges priced in the $100’s? Well, we can! We  selected the Mack Daddy 2 due to the level of control they offer, their level of forgiveness and also the amount of spin they can produce.

The one thing we are trying to show you here is that there are a wide variety of top-brand names that offer wedges for below that $100 mark. Also, they offer various levels of spin and control, so think carefully about your shots before making your actual purchase.

Who Are These 4 Sets Best For?

Budget wedges aren’t only going to be aimed at the novice golfer. Instead, even experienced golfers who are perhaps looking at changing brand name may want to invest in an inexpensive wedge set to get a general feel for the clubs before splashing out.

In saying that, we do feel that the options listed above are ideal for people still finding their feet in the game. We have selected sets that can all achieve the same kind of outcome, but with none of them going above that magical $100 barrier.

Here’s an important point. Any of the sets we have mentioned above already represent real value for money. Let’s face it, paying under $100 for 2 decent wedges that can make a difference to your game is amazing. However, if you want to try to save even more money then look at avoiding the latest versions from the current year and go back a couple of years. There will often be limited difference in what the club does but there can still be a difference in price.

What we have shown here is that you can have at least a half-decent set of wedges without splashing out a lot of cash. Any of the examples we have included above will be perfect for any level of golfer who just happens to also be on a budget.

So, what are your experiences of wedges? Have you previously got a bargain with a set that blew your mind and vastly improved your game? Let us known below.