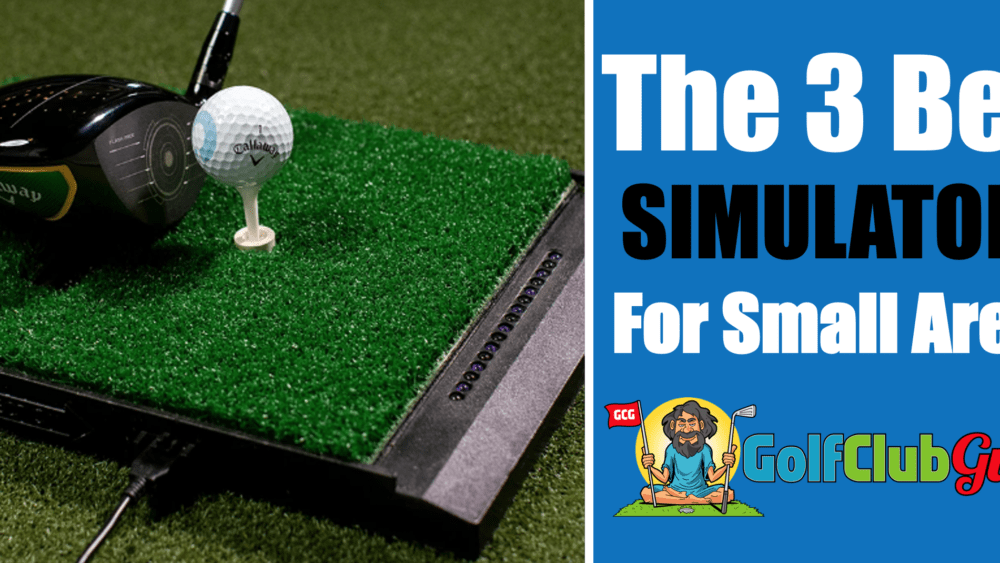 Let’s be honest, a golf simulator is a cool piece of equipment that is going to help improve various aspects of your game. It allows you to practice more, and that’s half the battle right there. However, there can often be a problem, and that problem is directly linked to the issue of space that you are willing to dedicate to a golf simulator.

Golf simulators are generally viewed as being guilty of taking up a huge amount of space that they are just not practical for the majority of homes. Of course, you could take up the biggest room in your house, but your family may not be too impressed. So, what are you going to do? The answer is to go ahead and check out one of these 3 golf simulators that we highly recommend. They were selectively chosen based on quality vs. amount of space taken up.

As well as looking at those that we feel are best for small spaces, they do cover different price ranges. After all, we don’t all have a small fortune to spend on something such as this, and why should anybody feel left out?

First up, we have the SkyTrak SIG10 Golf Simulator, and this is one of the most popular golf simulators on the market right now. It may be on the pricey side, but it’s surprising how this simulator can still fit into even relatively tight spaces.

The screen is 10ft wide, which is less than a number of others out there on the market. However, it’s not the size that makes this the best overall golf simulator. Instead, it’s down to its precision and accuracy which really is second to none.

The sensors of the SkyTrak SIG10 will capture all kinds of ball data including carry distance, the launch angle, and even the amount of spin that has been put on the ball after striking. This then allows it to accurately calculate where the ball would have landed, and then what would have happened to it after it hits the ground.

The simulator also comes with its own impact screen and side nets for added protection, but they don’t even extend out too far and take up much space. As long as you can stand far enough back from the screen to allow it to record the data, and as long as you can swing the club, then this can fit into pretty much any room. In short, it’s going to be the height of a room that could be the biggest hurdle for you to overcome.

Finally, it comes with 12 different courses to play on, so there’s enough variety to keep you interested. Overall, we feel that the data it records will allow you to better understand your swing, stance, and how you are striking the ball. From seeing the impact, you can then practice making various alterations to then see the difference it makes.

Here’s one rather cool thing, a golf simulator needn’t cost you an absolute fortune. Instead, if you are on a tight budget and still want to have a simulator, then the best value option out there is the OptiShot 2 Golf Simulator Setup.

Of course, at a price well under $1000, you shouldn’t expect it to be the most elaborate and fanciful simulator out there, but it’s still going to provide you with more options than you would expect for the price.

The way the Optishot 2 golf simulator works is simple. It uses infrared sensors on their special golf mat which then picks up the shot and then works out what would have happened via its software. See, nothing fancy or elaborate here. It also connects via a USB port to your PC or Mac and if you then add in your golf net you should be good to go. Oh, and it has various famous courses built into the software for some added fun.

There are various extra additions that you could pull into this setup, but then you are starting to move out of the best value aspect and into something completely different. So, for that reason, we recommend keeping it nice and basic since it’s still capable of providing you with an adequate amount of detail.

Best For Those That Already Have a Simulator/Launch Monitor: The Net Return Pro

If you already have a simulator or launch monitor system, consider picking up the Net Return Pro hitting net. It’s a high quality net that can sustain upwards of 200mph ball speeds.. As long as you can swing a club without any problems, then this net setup should fit even in the smallest of spaces. Many golfers use it outside actually.

The main benefit of this net is that it has an extremely small profile. Other nets take up an area of 10×10 feet due to the side nets and cage-like design needed to stop the ball. However, this net won’t take up much space, while still catching all types of mishits that you send its way.

The Net Return Pro only stands out by a couple of feet in depth while the framework that holds the net in place is also only a few feet deep. The only other space you require is to be able to stand far enough back from the screen to swing the club and for some data to be recorded.

Pair this net with an Optishot 2 and you’ll have the lowest profile golf projector of all time!

Any of the 3 golf simulators mentioned above are going to do their job and help you work on your swing and improve various aspects of your game from the comfort of your own home. The only issue is going to be the height for your swing, but you should have tested that out before you even got to this stage!

If you can afford it, then we do suggest getting the SkyTrak SIG10. As we said when reviewing it, the precision and accuracy is what makes this the best overall, and it’s capable of providing you with the best representation of what your shot would have been like out on the course. But if you can’t afford it, the Optishot 2 is a great alternative at a fraction of the price.

So, what do you think about golf simulators? Do you believe in them? Have you tried any of these simulators for smaller areas? Let us know your thoughts on this below.