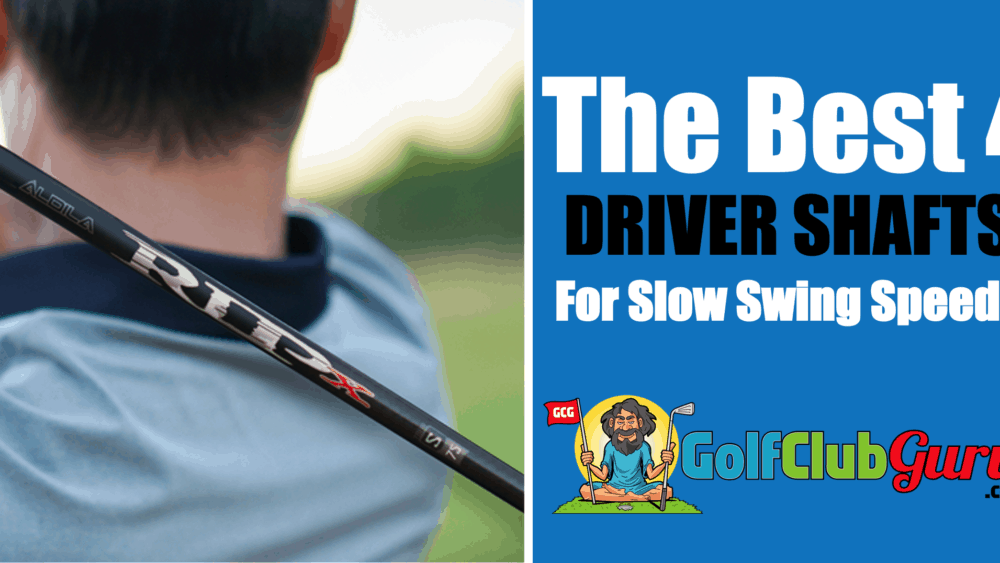 However, you do have options available while you work on improving your swing speed physically, how about looking at changing your driver shaft? This may sound scary at first, but doing something as simple as this can have a surprising impact on your swing.

As always, we HIGHLY recommend finding a local, certified club fitter. They know what they are doing, and they don’t cost too much compared to the value they offer. If you can afford it, you should have a professional fitting done to find the best combination of club head and club shaft for YOUR swing, no matter how fast or slow it is.

Why the Driver Shaft Makes a Difference

To understand driver shafts, we need to touch on the five factors of a golf shaft:

Ideally, a whippy, lightweight, long shaft will allow slow swing speeds to maximize their driver distance. However, all of these things will slightly hinder your accuracy, so you’ll have to decide which is more important to YOU. Remember: straighter drives are better than slightly longer drives.

These 5 different components of the shaft all play a part, and while you won’t want to go out there and change your driver head all the time, there is the option of changing the driver shaft pretty easily. Shafts for slow swing speeds vary in weight with them generally being anywhere from 40g to 135g. A heavier shaft moves through the air more slowly generating less energy. A lighter shaft cuts through the air, due to requiring less power to move it, so you up the swing speed creating more energy to then pass through the ball upon striking.

In other words, if you want to increase your swing speed, then reducing the weight of the driver shaft makes absolute sense. Thankfully, there are a huge number of driver shafts out there on the market that will be perfect for anybody with a slower swing speed. To help, we have selected just a few that are all capable of making a significant difference to your swing and the impact it has on the distance you can achieve.

The first driver shaft we recommend is the Mitsubishi Bassara E42 X5ct which immediately claims that it has been produced for those with slow swing speeds. This shaft is lightweight, flexible, and comes at a moderate length of 45 inches which should mean it’s perfect for an impressive number of players. Also, there’s a decent whip in the flex of the shaft without being too over the top, so that alone will help generate some additional speed.

The length is more important than you think. People make the mistake of lengthening their club thinking it gives more speed, which it does but it also reduces control, and that’s not good. This model strikes a balance which is brilliant.

The Integra SoooLong Ultralite driver shaft only weighs 45g, so it’s right there at the lightest end of the market, so that’s going to jack up your speed quite considerably. The only downside that we can think of is that this shaft is primarily aimed at Callaway driver heads, so its compatibility factor is somewhat diminished. However, it’s well-balanced and lightweight, so we feel it’s still worthy of being mentioned here.

This shaft is also available in a wide range of flex options from extra stiff down to those with more flexibility providing a variety of control levels.

This driver shaft from Project X is a prime example of how the one company can produce various shifts to help different swing speeds. The EvenFlow Red is aimed at slow swing speeds with it coming in around 50g to 60g in weight while it produces a higher ball height and higher amounts of speed.

This shaft aims to make the swing significantly smoother and easier to control while the lighter weight creates that extra energy to then create that added distance. However, make sure you get the red as they do have other shafts that are aimed at people with faster swing speeds.

So, this version does have a different name, but don’t allow that to sway your opinion of this driver shaft. This ultra-lightweight design is made from carbon fiber which does give it strength even though it weighs very little. Also, there’s a counterbalance attributed to it which gives the shaft more stability while also generating a significant improvement in the energy striking the ball.

Where the UST Mamiya Helium shaft is different is that it does generate more height from the tee than other versions, so if you feel that’s going to be a problem then one of the other options mentioned above would be better.

So, there are several driving shafts above, but we know that some are more expensive than others. However, even if you are on a budget, or unsure as to whether or not a more lightweight shaft will help, then spending less cash until you are sure about the positives is an option.

To help, we have an alternative option that won’t break the bank. We feel you should look at the Aldila Quaranta driver shaft. This has the flexibility you are looking for that’s going to help bring up the swing speed while also offering you significant control over your entire swing. You can also check for any examples on the used market, but even a brand new version is hardly going to break the bank.

To be perfectly honest, any one of the driver shafts that we have mentioned above will be more than satisfactory for any individual with a slower swing speed. The prices do vary quite considerably, so if you are on a budget and looking to even test how a different driver shaft will have an impact on your game, then our best value alternative is going to fit the bill.

So, what are your thoughts and views on these different driver shafts? Have you made this kind of change before? If so, what happened to your game? Let us know below.