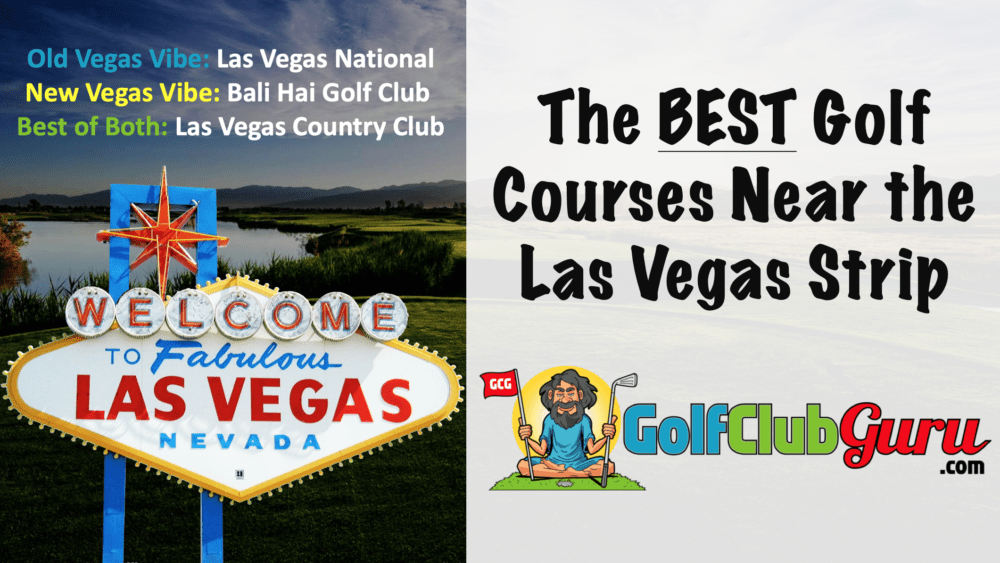 The Three Must-Play Las Vegas Golf Courses Near The Strip

The Las Vegas Strip is a tourist destination beyond compare, and a Golf outing here is just the thing for those who want to experience first-hand what this desert city is best known for – Good times that are guaranteed to leave a lasting impression! Whether it’s “Old Vegas” nostalgia or “New Vegas” opulence that you prefer, Vegas delivers!

Las Vegas National is a must-see golf course for those keen on experiencing what golf in Vegas “used to be like.” A quick ten-minute drive from the Strip will transport you to a time when golf in Las Vegas was about making real social connections and enjoying the beautiful golf weather with fellow golf lovers – not just posting token photos on social media to make your friends back home jealous!

Certain golfers won’t truly appreciate what this course has to offer, and may leave disappointed. But everyone else will leave with fond memories of a day well spent in a friendly and welcoming club environment that’s just oozing with laid-back Old Vegas charm and authentic golf history than spans several decades.

Completed in 1961, the course was once called the Stardust Country Club, as it was originally owned by the now defunct Casino of the same name. It’s a place where prominent local residents lined up to build their custom homes on lots that backed up to the popular local golf course, and to this day, those homes are a big part of the identity of Las Vegas National. As you might expect, some 60 years later, the upkeep varies from one property to the next, and many have been renovated to reflect the new owners’ personalities and tastes. But there is still plenty of nostalgia to go around! The most notable home sits left of the #1 Tee Box, between the #1 and #18 fairways. It was featured in the epic crime movie “Casino,” directed by Martin Scorsese in 1995. In the movie, the home was shared by Casino mogul Sam “Ace” Rothstein (played by Robert De Niro) and his wife Ginger (played by Sharon Stone, who was awarded a Golden Globe for her extraordinary performance.) Informational signage sprinkled around the course offers glimpses into similar noteworthy points of interest that history buffs will appreciate.

It’s well established that Frank Sinatra, Dean Martin, Peter Lawford, Joey Bishop, and Sammy Davis Jr. used to frequent the club, which served as a home away from home for the golf loving entertainers. To this day, the Clubhouse is named The Rat Pack Bar & Grill in their memory. The clubhhouse also includes the Las Vegas Golf Hall of Fame exhibit, documenting decades of golf history, including LPGA and PGA tour events, The Las Vegas Invitational, and memorabilia from when Tiger Woods played Las Vegas National in 1996 on his way to capturing his very first PGA Tour victory.

Las Vegas National, like Las Vegas itself, has had many reinventions over the decades, all in the name of providing the patron with a good time. The club was rebranded by a host of prominent owners, being known as The Sahara-Nevada Country Club, The Sahara Country Club, and The Las Vegas Hilton Country Club, before becoming The National as we know it today. Further proof of The National’s undying dedication to all that’s fun, the club is now one of the few courses in the city that offers Golfboards for rent. Surfing the course on one of them is sure to bring out the kid in you! Speaking of which, if the kids aren’t actually with you, you might want to bring them next time, as the National proudly advertises free junior play with a paid adult. It seems the free perks we could expect from “Old Vegas” are still alive and well and can be found at Las Vegas National Golf Course!

Located just south of MGM’s Mandalay Bay Casino, and just west of McCarran airport, Bali Hai is the most conveniently located golf course for visitors of the Las Vegas Strip. Like its glitzy resort neighbors, it’s built to awe its visitors with the sleek glamour and five-star service that defines the “New Vegas” atmosphere. It’s one of the best outdoor entertainment options the Strip has to offer, so it’s a daytime magnet for golf enthusiasts!

Upon arrival at the course, you’ll know you’re in Fabulous Las Vegas, despite the very convincing South Pacific architectural theme! That’s because, whether you’ve taken a cab or driven your own vehicle, your first stop will be underneath the Porte Cochere of the Clubhouse. It’s as impressive as any covered arrival gateway you might expect outside of a “New Vegas” casino, with elegant materials and intricate decorative details that convey an exotic and luxurious Polynesian Island vibe right from the start. Here a Valet will take your car keys and an Attendant will take your golf bag, and you’ll proceed through the clubhouse and head to the pro shop. If you’re in the market for souvenir golf gear, this is a great place to pick it up. They have a huge selection of really stylish apparel you’ll actually want to wear – and this course has the best photo opportunities you’ll find anywhere, so you’ll want to be prepared!

The Bali Hai landscape theme, as you’d expect, is a lush tropical oasis – the likes of which you’d find in Bali, but without the need to stamp your passport. There are palm trees galore – even more than you’d expect from a paradise-themed golf course – because, you know, it’s Vegas! The water hazards are as ambitiously designed as any of the water features on the Strip. The most dramatic is the naturalistic lagoon that flows between the terrace of the clubhouse restaurant Cili and the island green of the signature 16th hole.

Bali Hai Golf Club is a luxurious fantasy land, but it’s not without its own personality quirks and oddities, which is what Vegas is known for as well! Here the weather is often windy, which creates a pleasant rustling noise through the palm tree fronds, but also wreaks some havoc with the flight of your golf ball. A majority of the holes enjoy a spectacular backdrop of the iconic resort buildings of the Strip – but the loudly present airplanes and helicopter tours remind you that 40 million annual visitors come here to see them too! The surroundings will make you expect to hear the relaxing music characteristic of the island lifestyle – Some Elvis, maybe the Beach Boys, perhaps Jimmy Buffett – but all you’ll hear playing at Bali Hai Golf Club is Today’s Latest Country Music. It’s an odd coupling for sure, but just another reminder to expect the unexpected when in Vegas!

When it comes to enjoying the “New Vegas” vibe of Bali Hai Golf Course, set your expectations aside and simply go with the flow. Appreciate it for the spectacle that it is, and you’re bound to have a great time!

The Best of Both Worlds: Las Vegas Country Club (IF you can get access, that is…)

The Las Vegas Country Club eclipses everything that’s “Old Vegas” and everything that’s “New Vegas.” It is a rare window into the City’s storied past that transports players to a time when Dean Martin was there in the flesh, not just in bronze.

If this sounds like it’s too good to be true, that’s because it is, at least for most people. The Las Vegas Country Club is a private golf course, open to members only. If you’re one of the lucky few who gets to set foot on this course in person, let’s just say that you’ve figured out how to do Las Vegas right! For the rest of us, the Las Vegas Country Club may have to wait until we strike our gold…But it is Las Vegas, after all, where even the golf courses remind us that anything can happen!