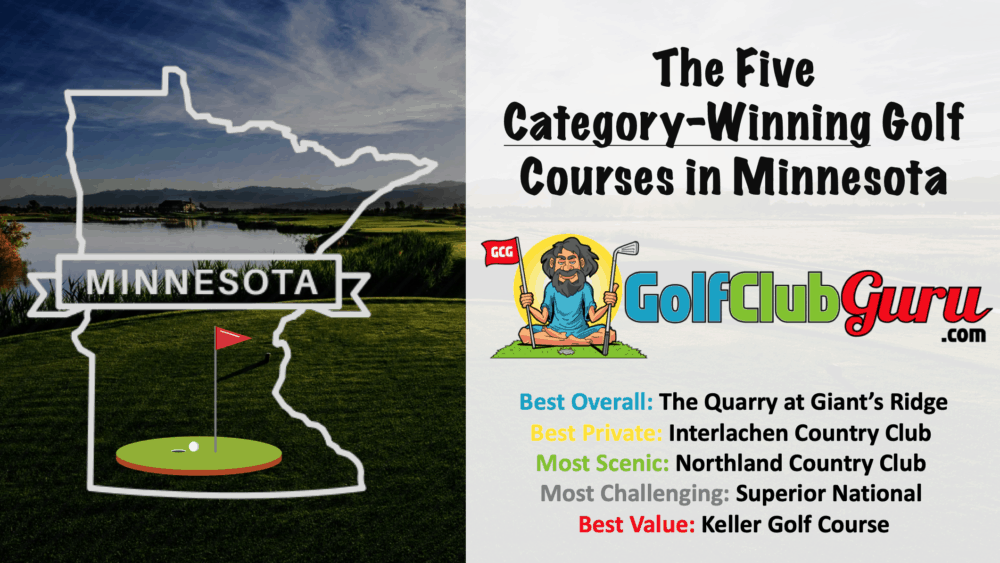 The Five Minnesota Golf Courses You Need To Play

Although Minnesota is most often thought of for its frigid winters, thick accents, and tater tot hot dish, it cannot be overlooked as a bona fide golfing destination. Minnesota boasts over 400 private and public golf courses and its 10,000 lakes and lush, wooded scenery make many of those courses absolutely spectacular.

While it’s true that winters can be long in Minnesota, golf in the month of March is not unheard of and fall golf when the leaves are changing color and the air is crisp in mid to late October is breathtaking.

What’s more is that the University of Minnesota’s stellar golf program and occasional PGA Tour stops like the PGA Championship in 2002 and 2009 and Ryder Cup in 2016 (all three of which were played at Hazeltine National Golf Club in Chaska, MN) have created a robust golfing culture in the state.

Whether you’re a pure blood Minnesotan and already know about the state’s fantastic golfing scene, or an out of towner, here are five Minnesota golf courses you need to play.

The Quarry at Giant’s Ridge is hands down the best overall course in the state and is often listed among the top courses in the country by national publications such as Golf Digest and Golfweek.

Northern Minnesota is known for its iron ore mines and quarries. Located in Biwabik, MN (a little over 3 hours north of the Twin Cities) The Quarry was built on the site of one such mine and offers golfers both a real challenge and unique cultural experience.

With slick greens and sloping, narrow fairways, The Quarry provides a golf outing unparalleled in Minnesota. And at 7201 yards from the tips, The Quarry plays deep.

Early season rates start at $72 walking and once the high season starts in early June, a round at The Quarry will cost you $89 to walk. While it is among the more expensive public courses in the state, The Quarry is well worth the loftier price tag.

Located in Edina, Minnesota, Interlachen Country Club is a golf course steeped in tradition. Bobby Jones won the 1930 U.S. Open at Interlachen and the course has been a regular stop on the LPGA Tour in recent years.

The course is known for its plentiful bunkers and tight, tree-lined fairways. It also boasts some of the tiniest greens you’d ever want to play. And the timeless clubhouse overlooking the 9th green makes for one of the most picturesque holes in golf.

To become a member at Interlachen all you have to do is pay a $100,000 initial fee, endure a several year waiting list, and secure the approval of one of the club’s membership committees. Or you could play as the guest of a member. Either way, you will never forget this prestigious golf course.

Minnesota is a scenic golf course lover’s paradise. There are so many courses to choose from. Superior National, Mount Frontenac, and Stone Ridge Golf Course are all candidates for most scenic course in the state.

But the most scenic of all the scenic courses has got to be Northland Country Club. Located in Duluth, MN (about 2.5 hours north of the Twin Cities) the course at Northland was designed by golf legend Donald Ross and features undulating greens, rolling fairways, and stunning views of the majestic Lake Superior on nearly every hole.

Northland is a par 71 and a touch shorter than some of the other premier courses in the state, measuring in at 6825 yards. It can be tough though, and is a 7 handicap. However, the views of Lake Superior make a round at Northland an enjoyable experience for any golfer.

And while Northland Country Club is another private course, the cost of membership is a shade more manageable than Interlachen. Single memberships can be had for just a few thousand dollars a year. If you do get the chance to play Northland, you won’t regret it.

If your up for a challenge then you need check out Superior National Golf Course in Lutsen, Minnesota (4 hours north of the Twin Cities). Like Northland Country Club, Superior National runs along the side of Lake Superior and its well kept greens are lightening quick, often sloping decidedly toward the lake.

Winds off of the lake can make for an especially difficult day at Superior National and the course also features canyons, river hazards, plenty of sand, and towering pines. Needless to say if you don’t bring your A-game to Superior National you might need a calculator when it comes time to add up your score.

Superior National will also cost you a pretty penny if you want to play there. It is one of the more expensive public courses in the state at $98 for 18 walking during the main season.

While the previous courses on this list 5 Minnesota golf courses you need to play range from pricy to old money extravagant, you don’t have to be wealthy to play at some of the best courses in the state. The Twin Cities alone are full of reasonably priced golf courses for both avid golfers and weekend hackers to enjoy.

At the top of that list is Keller Golf Course. Now a municipal golf course run by Ramsey County in the city of St. Paul, Keller opened in 1929 and is a championship level course. Throughout its history, the course has hosted PGA and LPGA tournaments including the 1932 and 1954 PGA Championships. Keller is also routinely featured in national golf publications as a top municipal course in the nation.

At around 6600 yards from the tips, Keller requires mid range depth and plenty of accuracy as trees, water, and sand are utilized with great effect throughout the course. The greens are all well manicured and the rolling fairways reward straight shooters.

In 2014 the course was completely renovated and offers golfers championship style golf at municipal prices. The twilight rate at Keller (starting four hours before sundown) is only $27.

Come to Minnesota and Play

Though you might not have guessed it, Minnesota is a golfing state and has a supply of courses you could spend the rest of your life playing and enjoying. But if you have to start somewhere, these are the five Minnesota golf courses you absolutely need to play.