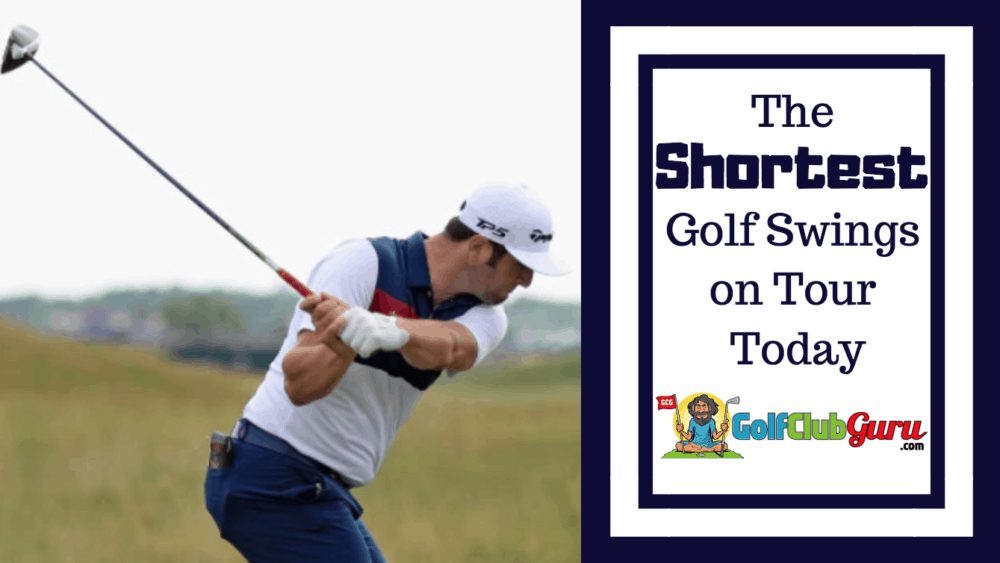 The Shortest Backswings on Tour

Short golf swings are starting to become much more popular among both amateur and pro golfers. If you are trying to shorten your swing, you can definitely learn a thing or two from watching how the pros do it.

If done correctly, you can improve your consistency without losing any distance at all. If done incorrectly, you can mess up your entire swing sequence and get into some terrible swing positions. To sum it up, try to keep a full shoulder turn, and instead just stop your backswing whenever your shoulders stop turning. Don’t allow your arms and wrists to keep moving when your shoulders have stopped rotating. The wrong way to shorten your swing is to reduce your shoulder turn and make a very armsy golf swing.

Here are some of the common characteristics that pro golfers have when they develop compact golf swings:

John Rahm has been making an absolute storm lately. People love talking about how short his backswing is, yet he hits the ball a country mile. He currently averages 307 yards off the tee for this year. Besides how short his backswing is, Rahm’s swing is unique in many different ways. He probably has the strongest bowed wrist at the top of the swing & impact, and he is the most laid off I have ever seen. Being laid off means that the club is pointing way to the left at the top, as opposed to more down the line.

He gets his distance, even with a short swing, by rotating quickly through the ball and having lots of lag coming into the impact position. He goes against the common theme of steep shoulder turns, though, as his shoulder turn is very flat. Although he does hit some errant shots at times, he is typically both long and consistent off the tee.

Kevin Chappell’s golf swing is one of the shortest swings of all time. His backswing is very compact, and even his follow through is typically cut off. He still hits the ball a decent distance, due to a strong impact position and a good bit of lag. It looks like nearly every shot he hits is a half shot, but that is normal for Kevin, who excels in the wind due to a slightly lower ball flight. It’s hard to believe that the video above is a video of a 3 iron swing.

His setup is extremely narrow. Kevin’s shoulder turn is very steep, which allows him to rotate his lead shoulder very low and keep his hands lower as a result. When he reaches the top of his swing, he has a slight over the top motion but down cocks his wrists slightly. His impact position is very solid, with his hands far ahead of the clubhead.

Will Wilcox has got one of the most unique golf swings of all time. With a very fast tempo and an extremely compact swing, he generates a good bit of acceleration through impact to make up for the short rotation in the backswing.

He ends a lot of his shots with a sawed off, shorter finish. He can do this due to all of the lag in his downswing and the great impact position that he gets into. His posture, both at address and in his finish, is very upright. This turns into a steep shoulder turn and, as a result, a great compression of the ball.

I absolute love everything about Alvaro Quiros’ golf swing. He has been at the top of the European Tour in driving distance for many years, yet his swing is so short and smooth. It looks as if he is trying to swing at 50%, yet the ball flies forever. I really like how he turns his head through impact, similar to Henrik Stenson’s famous move.

He definitely uses his tall stature to his advantage, as he can create great width even considering his short backswing. He has great acceleration coming into the ball as well. I bet if he truly wanted to, Alvaro could be one of the longest hitters of all time on tour. You can tell he is still holding back a little.

Although he is not an extremely well known golfer, Morten Madsen has one of the shortest golf swings of the guys on tour today. He hasn’t had a lot of good finishes on tour, but he has won a European Tour event. I love how loose his wrists are at the top. His down cocking creates a lot of effortless power.

Morten also has a pretty steep shoulder turn, which can help out when you are trying to develop a compact swing. This paired with the rotation of his torso through impact results in a great flowing golf swing.

Along with John Rahm, Tony Finau is starting to take the golf world by storm. I’ll never forget when he made a hole in on at the masters, twisted his angle, and then shot a 68 the next day with hardly any use of his front foot. He creates so much power from a swing that appears to be one of the shortest swings of all time. The video is obviously an iron shot, yet his driver swings are just as compact surprisingly.

He creates so much speed by having very loose wrists at the top of the swing, allowing him to decrease the angle between his lead arm and club halfway though the downswing. If he can create that much speed even without his front foot, I can’t imagine how much speed he is getting from his upper body and wrists alone.

Some guys have short swings due to their wristy motions, but others like JB Holmes have hardly any wrist hinge at all. His hands get higher than most golfers in this article, yet his wrists hardly hinge at all, leading to a compact backswing at the top. Like Kevin Chappell, JB has a very steep shoulder turn. This is obvious from how his right forearm stays so far above his left forearm in the backswing. This allows him to more easily compress the golf ball and send it miles.

Like Alvaro Quiros, JB is another long hitter with a super short swing.  That’s only possible with a great impact position and a fast rotation through the ball with his torso and forearms.

Zach Johnson, known for his great wedge play and putting, also has a very consistent golf swing. He stops well short of parallel due to a lot of wrist hinge at the top and short arm swing. Nearly all of his rotation in the backswing comes from his shoulders as opposed to his arms. When his shoulders stop turning, he instantly shifts his weight to his front foot and rotates hard through the shot.

He has great extension through the ball, as you can see in the video above. More importantly, though, he gets into a very powerful impact position with his hands far ahead of the ball at impact, thus delofting the club face. That’s one way to hit your 6 iron as far as you typically hit a 5 iron. For a smaller guy, Zach definitely hits it further than others his size.

Patrick’s swing is a thing of beauty. I love the slight pause at the top and all of the power he can generate even with a short swing. He has very little wrist hinge, as he gets most of his power through hip and torso rotation and downcocking the club in the downswing to get into a strong position.

Charlie Hoffman has one of the most underrated golf swings of all time in my opinion. There is no wasted motion, and everything moves together and fits together so well. He does everything that someone should when they want to shorten their swing:

All together, Charlie’s swing is one that anyone should try to copy to shorten their backswing.

Ah, last but not least, good ole Duff Daddy. In simple terms, he starts the swing with his hands instead of the club face. He then flips the club up with his wrists. Then, before the club is fully set at the top, he starts his downswing by getting his weight to his front foot. It all happens so fast. He keeps his wrists very loose, similar to Ben Hogan’s golf swing.

He is pretty long hitter considering his short backswing, which is possible due to a great impact position and a lot of lag.