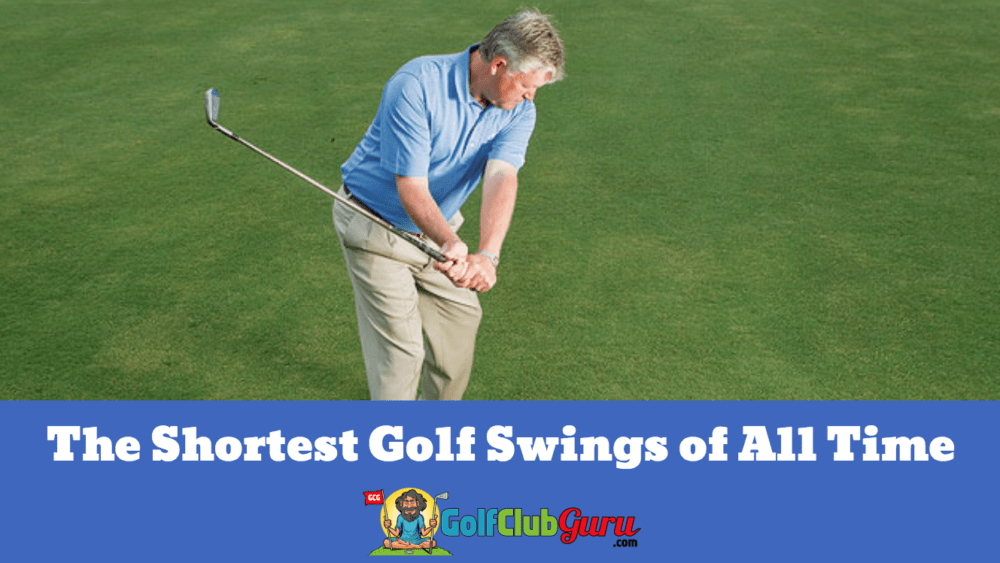 The Shortest Golf Swings of All Time

Short backswings are starting to become more common these days. Golf coaches often speak about the consistency that can come with shortened, more compact swings, and their students are listening! Many younger golfers are starting to realize that they can hit the ball just as far with a short backswing, too, which was previously the biggest fear.

Years ago though, when John Daly and Tiger Woods showcased their long, loose golf swings, compact swings were quite rare. Therefore, I chose to write about the shortest golf swings that the golf world has EVER seen.

Here are some of the common swing characteristics among thee guys, in case you curious:

Many of these guys are still playing today, but I tried to get videos of all of them in their prime if I could. If you want to check out the shortest golf swings on tour TODAY, check out this article.

Let me know in the comments below which golf swing is your favorite! Personally, I really like Doug Sanders and his loose, silky, short swing.

Tommy Armour III, the famous grandson of Tommy Armour, had about as short of a golf swing as you can have. His downswing started nearly as soon as his backswing did, but he accelerated hard and fast through impact. His golf swing stays almost exactly on plane through the .5 seconds that he is swinging the club, though.

He accelerates so hard through impact that he is practically standing upright in his finish. You’ve got to get power from somewhere, though. He chose to shorten the backswing and increase the acceleration, as opposed to other golfers who take the club back to roughly parallel.

A hockey fanatic turned golfer, Allen Doyle had one of the shortest golf swings of all time. He used to practice under a low ceiling, and you can see how that affected his golf swing progression. It appears that Allen had the shortest shoulder turn of all time, as he hardly even moves his lead shoulder. This goes against the common advice of turning your shoulders as much as you can comfortably. Allen’s swing was purely an arm swing, as opposed to most other guys in this article that got most of their backswing length from their shoulder turn.

Wow, what a golf swing that Doug Sanders had. So smooth and silky, very similar to Ben Hogan’s but shorter and with a much wider stance.

Once his hands stop moving in the backswing, he down cocks the club with his loose wrists. He then keeps the lag extremely well through impact.

Fun fact: He had a three foot putt to win the British Open in 1970. He pushed it right. Later, he had this to say about the putt: “It’s like buying a lottery ticket worth $200 million and then dropping it in the can and watching the numbers wash away. I felt like I cheated myself.”

As an Alabamian, Hubert green was pretty popular where I am from. Sadly, he passed away from throat cancer within two months before I am writing this article.

In his golf swing, he kept his hands very low. With such a wristy swing, it looked like he hardly got the club in the “L” position half way back before starting his downswing.

He had a very bent over posture and a steep shoulder turn, which also helped with keeping his swing as short and compact and possible.

Fun Fact: Like Doug Sanders, Hubert missed a three foot putt as well to win a major. His was to win the Masters in 1978.

Ken Duke has one of the longer swings compared to everyone else in this article, but I still wanted to mention him. He stopped a good bit short of parallel and had very loose wrists in the downswing to keep his lag. His swing has always looked incredibly smooth and effortless to me. That is probably because his forearm rotation through impact was very dramatic, similar to what Luke Donald does today.

Fun Fact: He was diagnosed with scoliosis and wore a brace 23 hours a day before getting it fixed two years later. I wonder if this affected his golf swing length by limiting the amount of shoulder turn he could achieve after the surgery.

Some golfers intentionally shorten their swings to gain consistency, while others…. well, don’t really have a choice. Due to his body structure, his lead arm seems to get stuck around halfway back, forcing him to steepen his swing plane and shorten his backswing. It is by no means a conventional swing, but it worked for him.

Fun Fact: people call him “the Walrus” due to his large body and mustache.

Although he had a pretty uneventful career compared to the rest of these guys, Dana Quigley had one of the shortest golf swings that the PGA tour has ever seen. He started his downswing nearly as soon as his club and lead arm formed a 90 degree angle “L”. I really like how he takes the club away alongside a small weight shift to get the swing started.

Fun Fact: he led the Champions Tour money list and became the oldest player to win the Arnold Palmer Award in 2005.

Fun fact: He is very Republican, refusing to meet President Clinton at the White House due to tax hikes around the Ryder Cup in 1993.

Sandy Lyle was a huge fan favorite back in his day. His swing was also one of the shortest ones during this time. He had a slight over the top motion, unlike anyone else in this article. He took the club far inside on the takeaway and then rerouted it back on plane in the downswing. Similar to John Cook, he had very little wrist hinge in his swing, which created a very compact motion.

At his peak, he was very long off the tee, so he wasn’t held up by his short swing in the slightest.