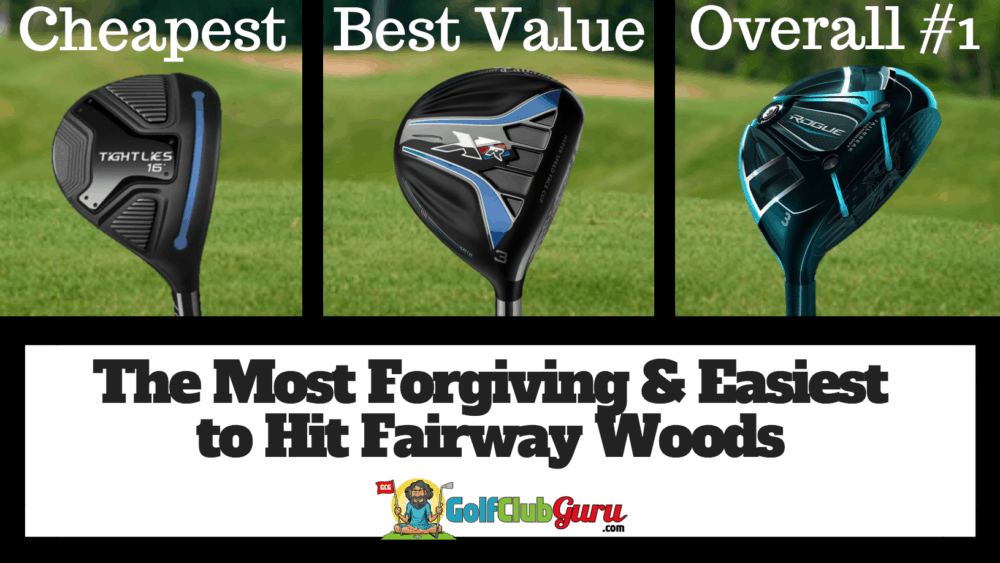 The Most Forgiving & Easiest to Hit Fairway Woods

When I look back and think about some of the biggest hurdles in my golf game, I’ll never forget the problem that I had with hitting my three wood.

I can’t begin to imagine how many shots I hit out of bounds trying to get on par 5’s in two shots. Often times, I would thin my fairway woods, leading to low, running shots that only traveled 200 yards or so. God forbid there was a hazard in my way, because my ball would find it for sure. Or I would chunk my three wood and launch it just 50 yards down the fairway.

Another problem was when I decided that driver was too much off the tee, so I would go with the “safer” three wood. Should have just taken driver in hindsight, as I just couldn’t get comfortable with my fairway wood for some reason. Even before hitting the ball, I had no confidence over the ball that I could hit a good shot. The head size of my 3W was so small! And the sole was designed so that I practically had to hit it in the center of the face for a solid strike. I honestly might have been gaming the toughest 3 wood ever made, and it was from a very popular brand (looking at you Titleist!).

So, I had two things to do:

Note: Don’t be afraid to try a slightly higher lofted three wood. The standard loft is 15 degrees, but a 16-16.5 degree three wood will be very beneficial if you are currently struggling with getting the ball in the air. For some reason I decided that a “strong” fairway wood would be best for me long ago. It was 13.5 degrees and nearly impossible for me to hit how I wanted to. Sure, I hit some cool stingers. But my average shot was too low and didn’t carry enough. I am now gaming a 15.5 degree three wood, and I’ve noticed tons of improvement due to practice and getting the new club.

The Most Forgiving Fairway Woods

So, let’s start talking about the best three woods & fairway woods that you can get. Golf clubs, like any other item, have a wide range in price. Depending on your budget, I think we can determine the best fairway wood for you. If you are someone that likes to save as much money as possible, I’ve found the cheapest, forgiving option that won’t leave you with a cheap, crappy club. The section after that is focused on the best value, easy-t0-hit three wood on the market. Lastly, I’ve listed, in my opinion, the absolute most forgiving fairway wood that you can buy today.

I’m going to go ahead and say that Callaway by far makes the most forgiving fairway woods. Their face and sole designs are 100% the most forgiving combo compared to other top club brands like Titleist, TaylorMade, etc. Callaway’s three woods have soles that are flatter, so that the face sits lower across the entire face of the club. This means that, even if you hit the ball an inch to the left/right of the center of the face, the ball will still be airborne and your shot will end up OK. With another brand, you’d end up with a sideways burner shot that doesn’t get very high in the air. So, a wider, flatter sole is a huge plus.

Other than that, Callaway has a few other benefits that are well suited for someone that is looking for more forgiveness in a fairway wood (center of gravity, length, jailbreak technology, etc). I’ll talk about them more throughout this article.\

Please note that all links/photos (if clicked on) will take you to the respective fairway wood listings on eBay.

I can’t speak more highly of Adams as a company. Price aside, their woods and hybrids are absolutely top notch. They are both forgiving and long, and they feel great at impact. Their sound at impact is so tinted that you can hardly tell you are hitting a ball. The Adams Tight Lies fairway wood is a great example of why Adams is one of the most underrated brands in golf.

When it comes to their prices, they are much lower than any new releases. I debated switching this club and the Callaway XR 16 fairway woods (below). They are both slightly older models, so their prices have both dropped substantially since they were first brought to market. However, the Tight Lies is on average a tad less expensive than the XR 16, so I decided to keep the Tight Lies as the cheapest option. If you go any cheaper than the Tight Lies, you are most likely going to be disappointed with the quality of your club. Off brand and lesser known clubs have sketchy durabilities, as many break within 20 rounds or less.

The sole of the Adams Tight Lies is very wide and forgiving. You don’t necessarily have to hit the dead center of the face for a decent result. So if you struggle with hitting the center of the club, this is a great option for you.

When it comes to appearance, it doesn’t get much better than this. I’m always a fan of a no-distraction, all black club at address.

Here is a quick review:

I really don’t think there is a more forgiving fairway wood than the ones that Callaway produces. The hitting area on the bottom of their club faces are the widest of any company. On top of that, their club faces are flatter, as opposed to more curved like TaylorMade, Cobra, and Titleist. That means that an off center hit will not only get airborne, it will also go relatively straight. This is assuming your swing is on a good plane though! With another club, you’d end up not only hitting a low shot, but you’d also end up way right with a strike on the toe of the fairway wood.

The best value Callaway fairway wood that you can buy is the Callaway XR 16 fairway wood. Like I mentioned in the above paragraph, this wood has a sole and face design perfect for lesser skilled ball strikers. If I were to buy another three wood at this time, this is definitely the one that I would pick. It was top of its class when it was released a couple years ago. It is now being overshadowed by the release of the Callaway Rouge (below) clubs. However, they are still the same high quality clubs that they were two years ago! Nothing has changed; the demand has simply dropped.

Some important things to note:

Some golfers can afford the best of the best. If that’s the case, you might as well shell out the money and get the cream of the crop: the Callaway Rogue fairway wood. This is the first time that Jailbreak technology has been implemented in a fairway wood. In simple terms, this means that the ball speed and forgiveness has been improved across the ENTIRE club face. Even off-center shots will fly far and straight if hit a tad away from the center of the face.

If anyone remembers the concept of hitting the ball “on the screws”, this is very similar. Decades ago, as long as you hit the ball within the four screws of a wooden driver, the ball was struck pretty well. If you missed those screws, you’d likely end up with a poor result. Same concept here. If you hit the ball near the two bars, you’ll ball should end up pretty well.

So far, the reviews have been absolutely incredible. Lots of distance, height on shots, and most importantly…  improved forgiveness. If had a large budget, this is the option that I would pick. However, I typically go for the best value options because I hate spending more money than I have to. You do you though!