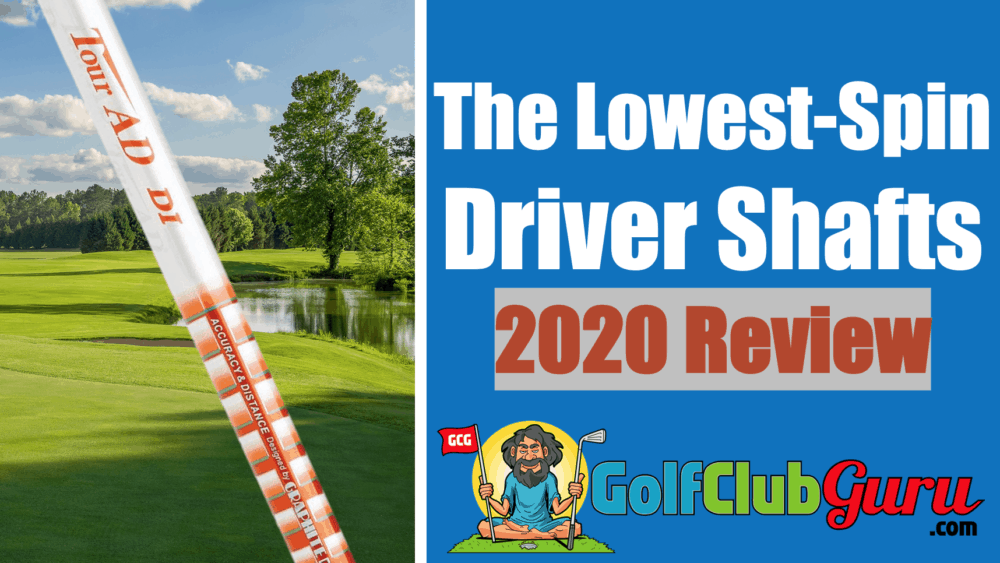 Here is something that novice golfers, and oftentimes even those with more experience, will never have thought about: low spin driver shafts.

Now, most golfers just play what is called “stock shafts”. Those are shafts that came standard with their driver that was most likely purchased online or from a local sporting goods store. However, experienced golfers typically get “fitted” for club heads and shafts to get the most out of their game. Low spin shafts will typically help reduce slices/hooks and lead to longer distance ball flights.

Keep in mind that you’ll likely need the help of an experienced clubfitter to take off and put on a new shaft to use with your driver head.

Why a Low Spin Driver Shaft is Important

A low spin driver shaft is important as it helps to increase the distance that the ball will fly through the air. More spin creates more drag slowing everything down and the energy that is in the ball is decreased. Less energy means it’s going to fall from the sky quicker, so you want to reduce this spin as much as possible.

The way that this is achieved is through either changes to the head of the driver or with the driver shaft. In the case of the shaft, the key here is in reducing the degree to which it effectively bends forward through the swing and at the moment when the ball is being struck. A shaft that bends forward in order to effectively align more with the club head is going to produce more spin.

So, through all of that science we can say that a low spin drive shaft is important if you want to add some yardage onto your drives.

The actual appearance of these driver shafts will be no different to any other on the market. Instead, you need to forget about what it looks like and focus on whether or not it fits with your driver head and how much flex is included in the shaft as that is what will determine the amount of spin it generates.

It’s important to stress that it’s the technology contained within the shafts that are the key here and not how it looks. Subtle differences in balance points, level of stiffness and flexibility, even the weight distribution and what the shaft is made from will all contribute in some way to its ability to reduce spin.

Finally, it’s often the case that the brand name of the manufacturer will be put all over the shaft. This can sometimes be too in your face, but we recommend you pay close attention to the technology and what it’s capable of doing when it comes to your game.

There are a whole host of driver shafts out there on the market, but the ones we are going to mention here all have one thing in common, they create a lower amount of spin.

First up is the Graphite Design Tour AD-DI. This shaft not only brings low spin but it also has their own form of nanotechnology included in the shaft. This offers a greater sense of stability while also providing higher launch of the ball. Overall, you will strike the ball farther with less spin and greater accuracy.

The next is the Mitsubishi Tensei CK shaft. This one is slightly different in that it is more of a low launch shaft even though it still offers a lower amount of spin. It is formed from carbon fiber while it also contains kevlar in the bottom of the shaft. The stiffer nature of the shaft is focused on the tip which has the aim of offering more direct energy and pushing the ball off the club face and being able to penetrate the air with more ease.

Next up, we have the Aldila Rogue Silver shaft, and this one not only offers low spin but also low torque and low launch. It too is made from carbon fiber while it also has thicker walls to the shaft compared to others. This, in turn, changes the balance pivot point of the club which alters the swing weight.

There are a multitude of other names out there that offer low spin driver shafts. The Diamana D+ Series from Mitsubishi, or the Kuro Kage TiNi XTS from the same manufacturer are just another two that spring to mind.

Do pay close attention to the cost as these driver shafts can vary a great deal when it comes to the price. These shafts will easily cost you in the $100’s, but exactly how much is something you need to check out.

Who Low Spin Shafts Are Best For

These types of driver shafts are best suited at golfers who have specific issues with their swing, rather than talking about novice or intermediary level golfers. If you have a high swing or a sharper downward angle, then they can make a huge difference as those are often the real contributing factor to too much spin on a drive resulting in you not hitting the distances you were hoping for.

The models that we have mentioned above are often linked to being used by various professionals, but that can mean they come with a heftier price tag. However, we do have some cheaper alternatives that can still offer a lower level of spin.

The best approach is to go back a few years and aim for items such as the Fujikura Pro Tour Spec or the Paderson Kinetixx would be ideal. We do feel that it should be from around 2016 because even though there have been some subtle changes since then, the difference may not be as big as you would expect.

The key here is that avoiding those low spin shafts from 2020 is going to save you money. Often, it’s all marketing that makes something seem new when, in actual fact, the technology can be the same from year to year.

The low spin driver shafts that we have mentioned above are some of the best on the market. Of course, the price is going to vary, as will your budget, and that’s why we have covered all price ranges in our selection.

So, what are your thoughts on this entire idea of low spin driver shafts? Do you believe in them?Have you noticed a difference? Let us know below.