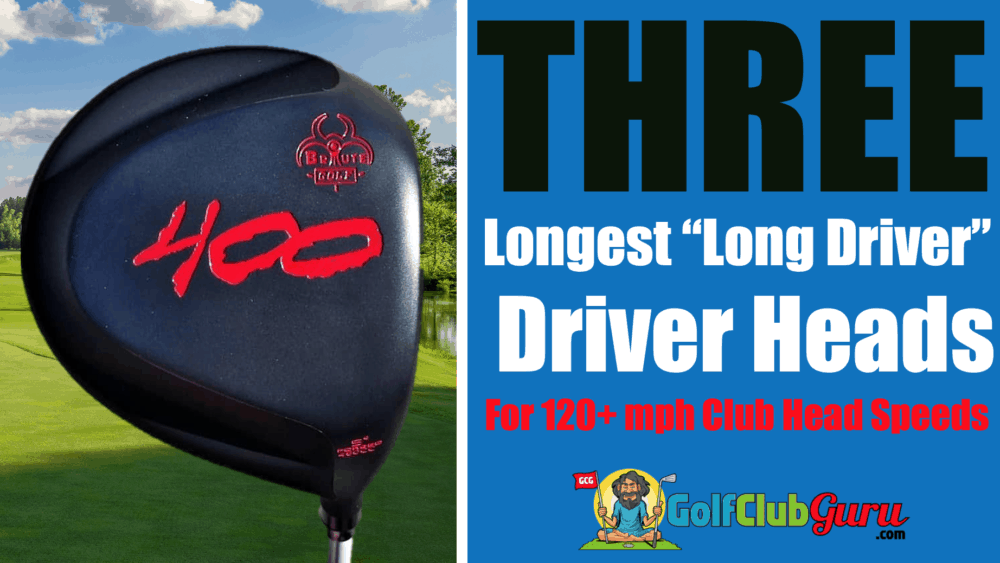 A non-conforming driver doesn’t fit into normal standards. Instead, what you are looking at here is a driver that has been tweaked in order to generate even greater distance than its normal counterpart. These are perfect for long driver professionals, or those looking to get into the sport.

As a result of these changes, we are talking about an impressive number of yards being added to a drive, and if you are in a long driving competition, then this could make a difference. Just to be clear though: this driver is not meant for most regular golfers. These drivers are FAR less forgiving, which is what most golfers really need in a club.

So, what are your options if you want the longest, non-conforming driver that money can buy? First, let’s talk about some differences.

Here’s an important point. At first appearance, these non-conforming drivers don’t look any different than normal drivers. It’s not as if this type of driver looks like it has come from a different planet. Instead, we are talking about subtle differences, but these differences can make a huge improvement to your driving length.

Here are the subtle differences. First, the club head may look slightly bigger than normal. Secondly, the shafts are stiffer and longer than normal driver shafts. Thirdly, the lofts are greatly decreased compared to normal driver lofts (9-12 degrees). Lastly, the you’ll likely notice that not many “top golf brands” like Titleist, Callaway, TaylorMade make long drivers. Callaway does, but that’s an exception.

Often, we are looking at changes to the weight, the distribution of that weight, the center of gravity, the size of the face, loft angle, all of those things can make a difference in the production of a non-conforming driver. However, those things aren’t noticeable based on appearance along.

What you need to remember is that the USGA has stated that the volume of a driver head should not exceed 460cc. This is to try to control the maximum length people can drive a ball, so anything that is over that figure is then falling into non-conforming drivers. Now, you may wonder how a difference between say 460cc and 500cc could change your game, but believe us when we say it can.

An increase of even 20cc can result in significant yardage being added to a drive. It has to then be classed as non-conforming on a course tournament setting simply because you would be making the game that bit easier with increased drives. Club selection would change with you able to bound onto more greens or leave yourself with a simple layup even on a Par 5.

But we aren’t worried about that right now.

Instead, what’s happening here is that this cc figure is being increased. From a science perspective, the greater the volume of the head of the driver, the greater the amount of energy that is being put into the ball when striking. Then, the more energy there is, the greater the distance that the ball will travel due to that increased level of force. Like we just said, it changes the way you play the game and can do so in a major way, but when you are merely playing in a long drive tournament, then you want as much yardage as possible.

Now that’s explained, let’s get back to the clubs.

3 of the Longest “Illegal” Long Distance Drivers on the Market

First up is the Krank Formula 11 X and the XX. These are nonconforming, while the Formula 11 Pro is conforming.  What’s the difference between the X and XX version? Well, it comes down to swing speed. If your swing speed is below 80, then go for the XX (actually, just use a normal brand driver, in my opinion). If it’s above 80, then the X version is best. It’s available in both left and right hand versions.

Design-wise, they push the weight to the sole in order to help provide more energy through the strike. Krank is well-known for these non-conforming drivers, and they won’t let you down. They are one of the most popular brands for long drivers, but be aware that they pay a lot of their athletes to play their clubs. If money weren’t an option, many long drivers would play different equipment (which is the case for all sports, but still worth mentioning).

Next, is the Brute 400 series driver. You’ve probably heard of Krank, but I’m betting most readers have never heard of Brute before, unless they’ve done lots of research. A great thing about Brute is that they made club heads with a wide variety of lofts. Many long driver brands are meant ONLY for professionals with 120+ swing speeds that can hit a 3-5 degree loft driver. Brute offers much higher lofts though.  You can make one for “normal play”, and it will be similar to a top brand driver, like Titleist/TaylorMade/Callaway/etc.  Or you could spec it out to “long driver mode” with crazy low spin, crazy distance, and terrible accuracy.

Finally, there’s the Callaway Epic Flash LD, and it’s cool seeing a brand such as Callaway appearing. This club is only available to right-handers, and even though the club head is 460cc, it offers low lie, a stiffer shaft, and the balance feels just right in your hand. This alone gives you the confidence to drive through the ball and generate as much force as possible.

It’s got a heavier head (has more reinforcement over tour), a heavier shaft ( three to four times X stiff), usually 48″ in length (3 inches longer than average), and 5 degrees of loft (as opposed to average of 9-12 degrees). You’ll need a high launching swing to get this ball above 10 feet in the air!

To be completely honest, this driver was intended ONLY for those in the 130MP+ club head speed club. I’m guessing you aren’t in this category quite yet. If you aren’t in this category, you probably will struggle to use it. But hey, you can keep practicing with it and work your way up to it! The Callaway Epic Flash LD variants are super rare. That’s why you’ll struggle to find any videos of reviews out there on the interwebs. Some believe they made less than 100 of these club heads, so the prices are pretty high, due to the high demand and low supply.

The drivers we have already mentioned can end up being a bit pricey. However, there are some better value alternatives out there that will still give you the same driving length but do so without ripping into your bank balance. You’ll save about $100 compared to the Callaway Epic Flash LD Driver.

For us, the best value alternative is the older Callaway XR16 LD. This 5 degree head looks the part and is an absolute brute. The cool thing is that it is available on the used market for less than half the price of a couple of the other drivers that we talked about earlier. Even though it’s a bit older, it still delivers big time with these long drives. There hasn’t been enough innovation in the past 4 years to justify the higher priced new releases.

To get the most out of it, make sure you use a stiffer shaft with something like the Fujikura Pro being quite a good option.

Who Needs These Drivers?

So, who is going to even need these drivers? They aren’t legal for use in competition rounds, but if you are planning on entering a long-driving competition, then they are going to be perfect. However, thanks to the increased speed and power that comes with these drivers it does mean you need to be capable of staying in control with your driving. Only then will these non-conforming drivers produce the kind of results you were hoping for.

Non-conforming drivers will certainly boost your driving length, so if you are simply entering a long driving competition, then the models we have mentioned above are going to be perfect. However, do take time to check out each option we have included and see which one best suits your own swing before buying.

So, what do you think about the idea of non-conforming drivers? What’s been your best results with one? Add your comment below to share