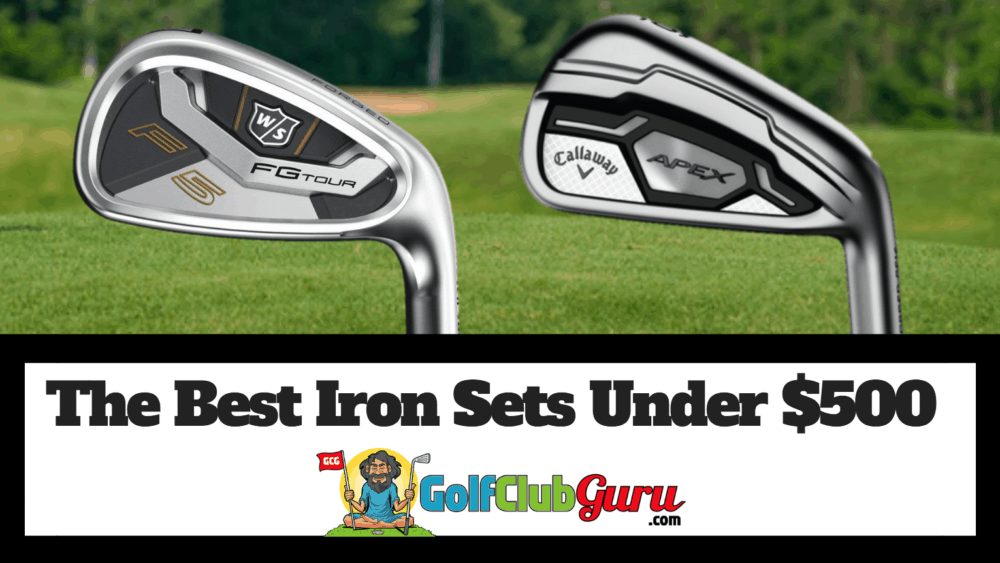 Most new irons sets come in right around $1,000. However, as you might could expect, many golfers can’t afford that price tag. If you go too cheap, though, you’ll end up with a low quality set that will most likely break within a year’s time.

Now that you hopefully know what type of irons you should be getting, let’s talk about how to get the best set for you under a budget of $500.

Please note that all links/photos that you click on will take you to the respective irons sets available on eBay.

The greatest super game improvement iron set under $500 are the Callaway XR OS irons. They are by far the most forgiving irons that you can get within this budget.

The top lines are very large, which should be expected for a super game improvement iron. The large top lines are so that there is more weight around the entire club face, to decrease the effect of an off center hit.

The club heads in general are also very large and tall. The sweet spot is probably one of the largest of all irons on the market. If you are unsure about your ability to hit the center of the club face, these are the irons for you.

These Callaway Apex CF16 irons were incredibly popular when they were first released. Golfers were paying $1,000+ for them with no questions asked due to their high reviews and huge expectations.

When it comes to distance, these irons are pretty top notch. I’d say they are the best mix of distance, feel, and forgiveness. And that is exactly what you should be looking for in a game improvement set of irons.

I will say that they launch the ball very high compared to other game improvement irons. So if you alright hit the ball too high, you might want to get fitted so that you can find the best shafts for you.

These might just down as the most underrated irons of all time. Most low handicap golfers unnecessarily discount Wilson’s premium lines of clubs without even trying them. However, they perform so well on every level.

The Wilson Staff FG Tour F5 irons feel incredible at impact, and give you great feedback on your ballstriking. If you like working the ball left and right, this is the best set of the three for you.

Forgiveness lacks a little compared to the other irons listed in this article, but that is to be expected. What these irons lack in forgiveness, they make up for in feel and distance control.

There are not many brand new players irons that you can buy for under $500. As a result, I would consider these incredible underpriced.