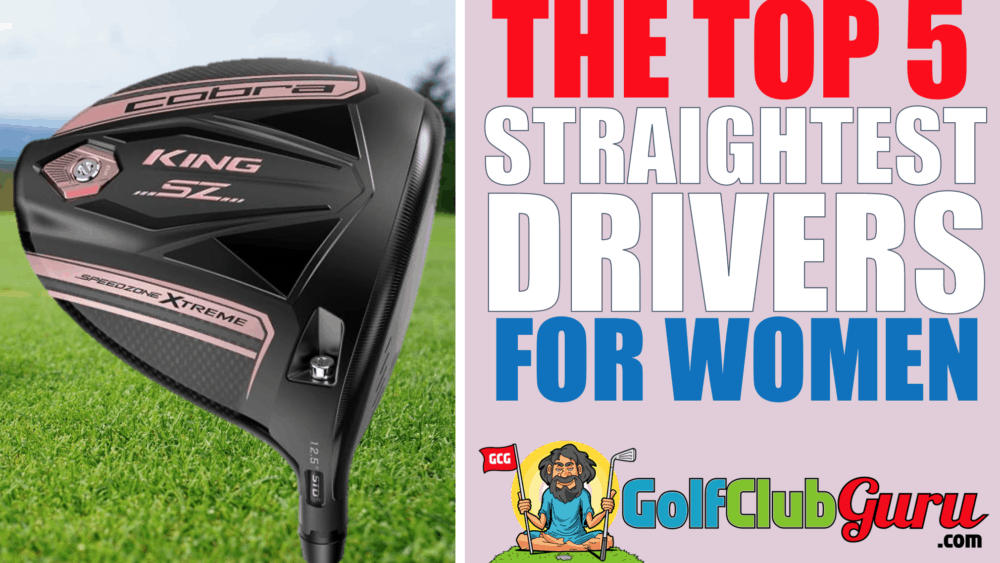 The 5 Straightest, Most Forgiving Drivers for Women

Straight drives are better than long drives, I promise.

Your score will drastically improve due to hitting 20% more fairways than it would if your driving distance increased 20%. A better score = more fun.

Anyway, let’s get to the straightest women’s drivers on the market.

What are we looking for when it comes to the straightest drivers? 4 things.

So, to sum everything up, we are most likely looking for a forgiving, high lofted, low center of gravity, draw-biased driver. This will give you every chance to hit the ball straight.

First up is the TaylorMade Sim Max-D Driver, and this model is seriously good when it comes to hitting straight drives. Not only does it look the part, but it also delivers straighter, more consistent drives as well.

Forgiving: Compared to the SIM and SIM Max drivers, the SIM Max-D driver has a larger club face (and therefore sweet spot). More area on the hitting area = more room for error = more forgiving. A larger club head and club face simply make golf easier. Do yourself a favor here.

High Lofted: This driver head comes in 10.5 and 12 degrees of loft. I would recommend the 12 degrees of of loft for about 95% of women. The 5% of women that have super fast club head speeds will benefit from the 10.5, but it’s not very common. Remember: more loft is easier to hit.

The TaylorMade SIM Max-D driver has an adjustable loft sleeve. That means that you can adjust the face angle and loft angle. So if the standard driver is 12 degrees of loft, you could add 2 extra degrees of loft (14 degrees total) and close the club face one degree if you struggle with leaving the club face open. You now instantly have a better chance of hitting straight drives! However, I’d still recommend that you get to the roof of the problem with the open club face, with the help of a PGA professional.

Draw Biased: Because most women struggle with an open club face at impact, TaylorMade made the Max-D driver. Max-D stands for Max Draw. In other words, it’s draw-biased. A small heel-weight makes it easier to naturally close the driver face at impact, as opposed to a neutral-weighted club. If you struggle with hitting slices and pushes (to the right), then this is a great option for you.

Low CoG (Center of Gravity): To start with, there is a weight on the back, bottom of the club head. They call it the “Inertia Generator”. It shifts the center of gravity back and lower, leading to higher launched drives. Higher launched = lower spin = less side spin = straighter drives.

There is actually 2 more pieces to this driver head that I want to talk about.

The Cobra King Speedzone Xtreme driver is widely accepted as being one of the easiest clubs to use, and it’s also seriously forgiving. In other words, you can let loose with your swing safe in the knowledge that this driver is going to help you out at the end.

What they have done is look at the different areas of the swing and the club itself that are directly affecting your drive and direction. They have then sought to distribute the weight into those areas to make things as balanced as possible. The result is a club that is exceptionally stable, lightweight to add more power, and one that won’t overflex or twist resulting in your striking going off line. All of this has then led to a club that produces a higher flight of the all and a whole lot less spin resulting in a straight drive that travels a greater distance than ever before.

Forgiving: Weight is strategically placed on the perimeter of the Cobra King Speedzone Xtreme driver head to resist twisting and enhance stability. The end result in a larger sweet spot, leaving you with more margin for error. Theoretically, mishits should still fly relatively long and straight.

Draw Biased: The head isn’t draw-biased per-say, but you can open or close the club face by 1 degree using the adjustable loft sleeve. A “shut” club face will encourage the club to naturally become square at impact, without any sort of rolling actions with your arms through impact.

Low Center of Gravity: Cobra placed nearly 70 grams of weight as low as possible to launch the ball higher… quicker.

The Cobra King F6 is widely regarded as being one of the best drivers on the market right now, and it’s all because it’s viewed as being the most forgiving available. With this, you can adjust the center of gravity as well as the loft angle to really get the club to work in the way that you need it to.

This increased sense of control due to being able to change these two areas means you can look at increasing your swing speed to get more power and to also get more yardage on your drive. However, the lightweight head is also going to add to that sense, so it’s not all going to rest on your shoulders.

The Callaway Rogue Draw driver looks like an absolute beast of a club, and that’s because it is exactly that. However, at the same time, it’s also going to be very forgiving for you to help bring your ball back onto line instead of screaming off and missing the fairway completely. With it being draw-biased, it’s a great fit for those looking to hit long, high, draws like they’ve always dreamed of.

This is all due to their Variable face technology where they have been quite subtle in making different areas of the club face thicker or thinner than usual. This driver head has all been designed with aerodynamics in mind with the result being  more speed and a larger sweet spot than before. You will get a cleaner strike with less spin being generated, so that ball is going to fly on a more true line as a result.

Ping still makes quality clubs, and the Ping G Le 2 driver is a prime example. Not only is it lightweight to encourage more speed and greater distance, but careful positioning of the weight around the back perimeter of the club head has led to an increase in how forgiving it has turned out to be.

In order to help, Ping has made the crown of the club head thinner which, in turn, helped change the center of gravity. Also, it means you are able to effectively square off the club face throughout the point of striking the ball so it flies off in a straight line instead of being hooked or sliced.

Of course, that does mean you need to have worked on your own swing technique, but this driver does pull things back to a certain extent, so it’s going to help keep you on track even when you may have certain issues with your own swing.

If you want to save some cash but still benefit from those straighter drives, then we recommend the Cobra F-Max from 2017. This driver had a higher loft angle and a lighter head than other drivers leading to the ball getting up into the air with ease. The face also had an offset on it that will encourage a square club face at impact. Look around the used market to find one that’s an absolute bargain.

There’s more to a driver than it simply being a club that allows you to get the greatest yardage possible. Instead, you need to feel confident in that driver actually helping you to keep things as straight as possible. After all, you don’t want to hook or slice your shot deep into the rough and constantly miss the fairway, do you?

But there can often be a problem. Not every driver is going to be capable of helping you to keep things straight. For this, you need a driver that reduces spin, twisting during the swing action, and with a large and forgiving sweet spot. All of these things make a huge difference, and the 5 drivers that we discussed are all capable of helping you out.

Getting a driver that’s capable of bringing the ball straighter than before is key to getting your score down. Any of the clubs mentioned above will help with that allowing you to feel a whole lot more confident in your striking of the ball. But, what do you think? Let us know your thoughts below.