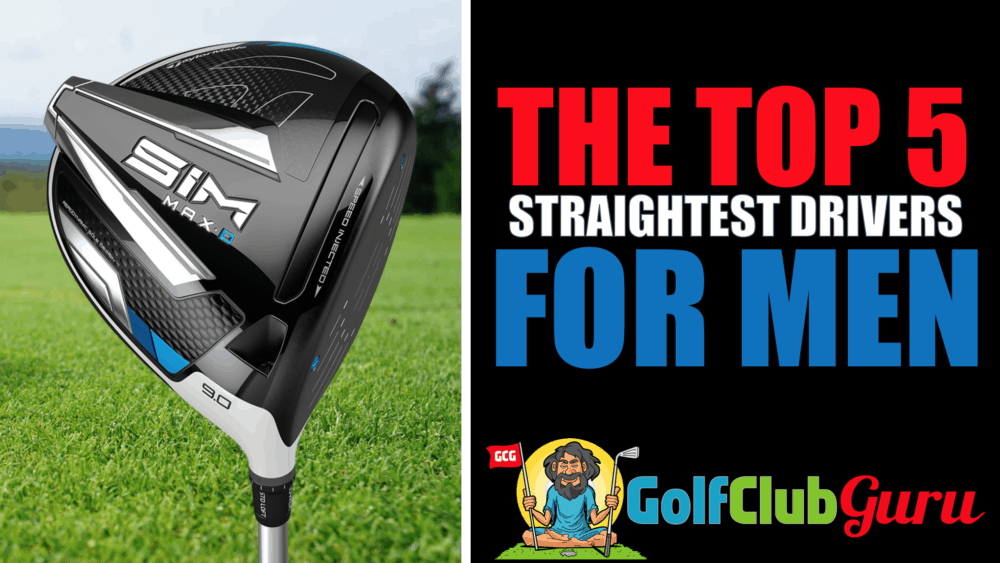 The 5 Straightest, Most Forgiving Drivers for Men

While most golfers are hyper-focused on drivers that promise to add 10 yards to their drives, you probably should focus on drivers that will make your bad shots… still playable.

In other words, a straighter, a more forgiving driver will help out 95% of golfers, while 5% of golfers would be better off with the extra distance.

What does it take to be the “straightest driver” for men? Well, there are three factors:

So to make this article as helpful as possible, we’ll be looking at the most forgiving, draw biased, low center of gravity drivers on the market.

With these 3 factors in mind, here are the five straightest drivers for men.

The TaylorMade Sim Max-D driver literally has everything that we are looking for in the straightest driver on the market. It’s got a large, oversized club face (taller than the Sim and Sim Max). It is draw biased due to the extra weight distribution in the heel of the club. And it’s got a super low center of gravity (due to the extra weight low and back on the club head) for extra forgiveness and higher launch.

If you compare the 3 TaylorMade SIM models, you’ll notice the oversized club face of the Max-D. Extra room on the club face = larger sweet spot = more forgiving on mishits.

TaylorMade loves talking about all of the technology that they put in their club heads. We don’t like the big words they use, but we’ll talk about them a little nonetheless. With this model, it comes with their Inertia Generator and Twist Face technology, and this is going to make a real difference. This technology is intended to partly correct mishits off the face while it’s also looking at pushing the limits when it comes to flexion on the face. This allows you to generate more power through the strike while the forgiving nature of the driver allows for more regular, straighter drives.

Ping have been around for an eternity. They aren’t a new company in any sense… however, their drivers have EXPLODED in popularity in the past few years, and for good reason. And it’s safe to say that their “SFT” (Straight Flight Technology) line of drivers has been the leader in straightness since its inception.

Basically, the Ping G410 SFT driver takes all of the awesome things that can be found in the Ping G410 and G410 Max drivers, and then adds in a draw bias via weights placed near the heel of the club head.

Huge sweet spot, huge club head, low center of gravity design, and draw-biased. Literally everything that we are looking for. You can also adjust the loft sleeve to increase/decrease loft and encourage a bigger draw/fade if you’d like.

This is all possible thanks to the tungsten weight that can move through heel to toe depending on how you want to set it up. The cool thing is that this can add up to 10 yards on either the draw or fade option, so as long as you are aware of how you tend to pull your shots, then this is going to send things straighter as a result.

Please note that we NEVER, EVER recommend buying a swing fix. Work with a professional on your swing, but keep in mind that an SFT driver like the Ping G410 driver can truly help square up the club face at impact, which is all that matters.

Titleist drivers haven’t done so hot in the past 5 years or so. Most golf equipment junkies will agree that the TS line of drivers has changed that, thankfully.

Due to the shape (traditional, not pear shaped like the TS3), the Titleist TS2 driver is a more forgiving option. Larger sweet spot and lower center of gravity. The Titleist TS2 driver has the real capability of helping you to send that ball straight down the fairway rather than shooting off left or right into deep trouble. It also comes with 4 different loft angles to play around with, and we do recommend checking out the difference in trajectory to see how it has an impact on your striking.

The club head is also far more streamlined compared to previous models, so it does cut through the air with real ease. This helps you generate more power and increases your yardage, but let’s not forget that this driver is designed to keep things on the straight and narrow as well.

This club is aimed at the amateur golfer, and we feel that this is the best option out of several drivers all bearing the TS moniker. It has a thinner titanium crown with better weight distribution for people still trying to master their swing, while it has a larger profile than you will find on either the TS1 or TS3. This does mean you can expect it to be far more forgiving than other models, and then the loft angles will also allow you to better control the trajectory.

Callaway’s Mavrik line of clubs has been killing it on all levels, especially forgiveness. Callaway calls it: “Our easiest to hit MAVRIK Driver with two interchangeable weights for a MAX forgiveness or a MAX draw configuration.” Max forgiveness and max draw are great things to look out for when amateur golfers are looking for a solid driver to improve their scores.

The Callaway Mavrik Max driver is a seriously good driver, but even though it’s more associated with distance, it’s also going to help you to keep that drive straight. Personally, I felt as if it was the most forgiving driver that I’ve ever tried. Mishits seems to fly incredibly far and straight, even when I could tell I missed the center of the clubface by a big margin.

This model comes with three loft, 9 degrees, 10.5 degrees and 12 degrees. In general, slower swing speeds should stay closer to the 12 degrees of loft, while faster club head speeds should stick with 9. However, the best choice really depends on lots of other things, like attack angle and the weather/courses that you typically play in/on.

The only other thing to report is that this club does come with its own draw bias, but this is something that can be adjusted thanks to that moveable weight. If you want to do this, then you simply need to move the 14g weight more to the back of the sole and/or to the toe of the club. Oh, and you can also adjust the loft sleeve to open/close the club face.

Finally, we have the Cobra King Speedzone Xtreme, and we must stress that you get the Xtreme version over any others out there by Cobra. Cobra is a super underrated brand when it comes to drivers, but the Xtreme model truly hit the nail on the head when it comes to a super-straight driver.

An oversized head (compared to the standard Speedzone driver), a weight back and low on the club head, and an adjustable loft sleeve all combine to result in a driver focused on hitting straight drives.

Oh, and the milled driver face offers an awesome sensation at impact, which is hard to fine.

At this point, we like to introduce a better value option. All of the 5 options that we just talked about are simply far more expensive than we would like. Remember: this website is all about finding the best value clubs on the market. Typically, that will mean older models, as opposed to the new ones that we just discussed.

After all, you don’t always have to spend a fortune to get a driver that sends the ball straight down the fairway. So, to save you some money, at least compared to the drivers above, we recommend the Ping G400 from back in 2017. It was originally about $450, but you can now pick one up for around $250. The release of the Ping G410 that we talked about earlier resulted in a price drop of the older model G400. Practically the same club with a different design, if we are being honest.

The Ping G400 has a huge face, is seriously forgiving, and the center of gravity is sent more to the back of the head. When it was initially launched onto the market, it was widely viewed as being one of the most forgiving drivers on the market, and that still stands true today.

While you may be tempted into only focusing on the yardage that a driver can offer, we advise you to look beyond that for just one second. Instead, having a driver that helps keep things straight and aimed more at the fairway is going to completely change your game. After all, is there any point in driving new distances if you scream off the fairway and pretty much onto another hole?

Any of the drivers mentioned above are going to help you with your game. However, do comment below if you have had any experience with those we have mentioned or if there are any other models out there on the market that you feel have been able to help your game.