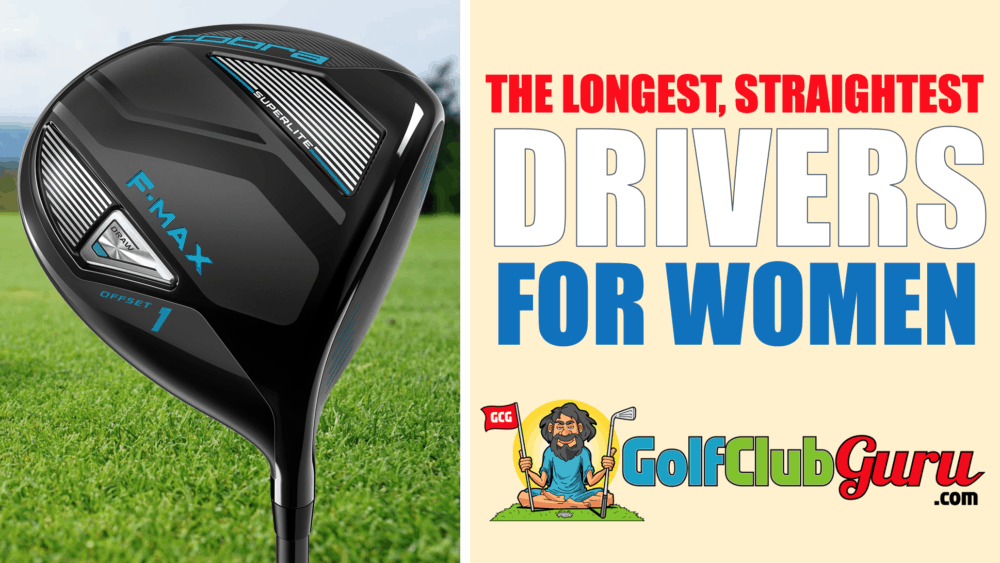 The 5 Longest, Straightest Drivers for Women

Being able to add a few yards onto your drive can make a huge difference to your game. Hitting more fairways, however, is far more important when it comes to scoring better. So, we are torn here. Driving the ball further is more fun, but driving the ball straighter helps avoid those double bogey (or worse) holes.

I guess we have to compromise here. Let’s look at the 5 drivers that offer the best combination of DISTANCE and FORGIVENESS for women. So, really, I guess we are looking for the best OVERALL ladies drivers that money can buy.

First up, there’s the TaylorMade SIM Max women’s driver, and while this certainly looks like it means business, the good news is that it also delivers as well.

TaylorMade have changed things around a bit when you compare this version to the predecessors. It’s got a new shape (more aerodynamic), a “speed injection” channel to increase ball speeds, and a taller club face to increase forgiveness.

When compared to the men’s SIM Max driver, the women’s driver shaft is 2 inches shorter and about 20 grams lighter. The shorter shaft will help improve control, and the lighter shaft will help generate more club head speed for distance.

You can get this driver with 10.5 or 12 degrees of loft. Typically, faster club head speeds will perform better with the 10.5, while slower swinging women will prefer the extra loft. The 12 degree loft is more forgiving and will hit the fall further with slow-moderate swing speeds. The 10.5 degree loft is less forgiving, but will travel further with faster swing speeds.

Technology mumbo jumbo (you’ve been warned): A major factor in recent TaylorMade drivers has been the Speed Injected Twist Face. It increases ball speeds across the entire face, and it also improves the forgiveness on mishits. If you expect to miss the center of the club face on a regular basis, this is a great option for you. Their “inverted cone technology” also expands the size of the sweet spot, improving performance on mishits. What all of this also means is that this driver is quite forgiving, and that should add to your confidence in just letting go with your swing. Their patented Speed Pocket Technology has increased the size of the sweet spot allowing for the easy correction of that slice or pull to be brought back into line.

Callaway’s Mavrik line of clubs focuses on two things: distance and forgiveness. That’s perfect, because that’s exactly what we are looking for here.

So, if you are a fast swinger as a women, I would recommend just sticking with the standard Mavrik model. If you are a slower or moderate speed swinger, I’d recommend the Mavrik Max for the extra forgiveness (and still PLENTY of distance).

The main difference between the Mavrik and the older Rogue women’s driver? The Mavrik has a club face designed by artificial intelligence (AI). Sounds gimmicky, but apparently is has resulted in a small increase in ball speeds and a slight improvement in forgiveness across the face. Small improvements can make a big difference! This driver also includes the Jailbreak Technology that we talk more about in the next section.

The head is ultra lightweight while the entire club is very forgiving, but the main feature is the Flash Face. Using AI, they claim to have designed the perfect face that produces more speed and, as a result, greater distance. If you want the latest and greatest technology in a driver, I’d recommend the women’s Callaway Mavrik Max driver.

This driver may have been initially launched back in 2018, but it is still capable of delivering consistent shots that have not only greater distance, but also greater accuracy. This is, of course, due to the technology contained in the driver head, so what should you expect from it?

First, it contains their ‘Jailbreak Technology’, and the main advantage of this is that it reduces weight by 25% thanks to using titanium rods. The reduced weight results in faster swing speeds, and the jailbreak bars result in slightly faster ball speeds. However, that’s not all.

The Callaway Rogue Driver also includes their X-Face VFT technology, and this is a potent combination. With this, they use titanium rods to add some extra stiffness to both the crown and soul. As a result, it increases the impact area and this has a positive impact on both ball speed as well as distance.

With the weight, Callaway distribute it throughout the club head giving it amazing balance. Also, by spreading it around the edges, it also reduces the ability of the club to twist through the swing which, in turn, helps to make this club quite forgiving.

Cobra is far underrated when it comes to women’s clubs. Their complete sets offer an incredible value to begin with, but their individual drivers are also great options if you already have the rest of the clubs.

The Cobra F-Max SuperLite Offset driver is pretty self explanatory. It’s super light weight, which is great for generating as much distance as possible. And it’s got offset, which is pretty rare in a women’s driver, which ensures that the club face has the greatest chance of being square (or closed) at impact. This makes sure that the face doesn’t remain open, which would result in a push (to the right) or a big banana slice.

In brand new condition, you can pick up the Cobra F-Max SuperLite Offset driver for under $200. Pretty crazy, honestly. Oh, and if you don’t want the offset, you can also buy the club (for the same price) without the offset feature. So if you don’t struggle with leaving the club face open, I’d recommend the non-offset option. However, most women DO struggle with an open club face, so the offset version is what I typically recommend the most.

This driver comes in 11.5 and 15 degrees of loft. That may sound like a lot compared to other women’s drivers, but the “actual” loft varies when you consider launch angle, angle of attack, center of gravity, and the moment of inertia of the driver. In general, very slow swingers will perform better with the 15 degrees of loft, as the 11.5 option simply won’t travel high enough into the air to carry far enough to maximize distance. Faster swing speeds will driver better with the 11.5 loft option, as they can generate enough speed to maximize distance.

The previous TaylorMade driver in this list was aimed more at those with a huge budget, but that doesn’t apply with the TaylorMade Burner. The TaylorMade Burner driver was released more than a decade ago! But guess what? It still performs just fine. It’s super durable, very long, and very forgiving for a driver that old. And the age of the driver has led to the price falling under $100 for a good, used model.

This driver comes with a 460cc head, so it’s pushing right up to the legal limits. Also, by moving the center of gravity back into the absolute core of the head, it alters the launch angle meaning the ball is going to stay in the air for longer, and slightly higher than you may have previously been reaching.

The TaylorMade Burner women’s driver has a huge sweet spot, so the confidence in your shots going straighter than before allows you to inject more power into your swing leading to greater distance. The ultralite shaft is also going to speed things up with this generating more power.

Next, the club is designed for the casual golfer, and it’s going to lift the ball higher into the air. However, this is achieved with greater control than before and it eliminates a major issue that inexperienced golfers tend to have in that the ball goes too low with too much spin cutting the distance dramatically.

In addition, the design of the head is done in such a way so as to help people with their alignment before the swing. Thanks to the outlines on the crown, you should never run into problems with finding the middle of the head, and this reduces the chances of slicing or hooking your drives.

All 4 mentioned above are high-quality drivers, but they can be more on the expensive side. So, we actually recommend the TaylorMade Burner for women on a budget. This was already a brilliant driver that could deliver greater lengths and more accuracy, but now that it has been surpassed by so many different newer models, then the price has dropped. Look for one in the used market and you should be able to do this for under $100.

So, what are your thoughts on the drivers we have included in our list? Do you feel it’s worth spending a few $100’s to get those extra yards, or are you planning on sticking with your old trusty driver? Let us know in the comments below what you think about all of this.