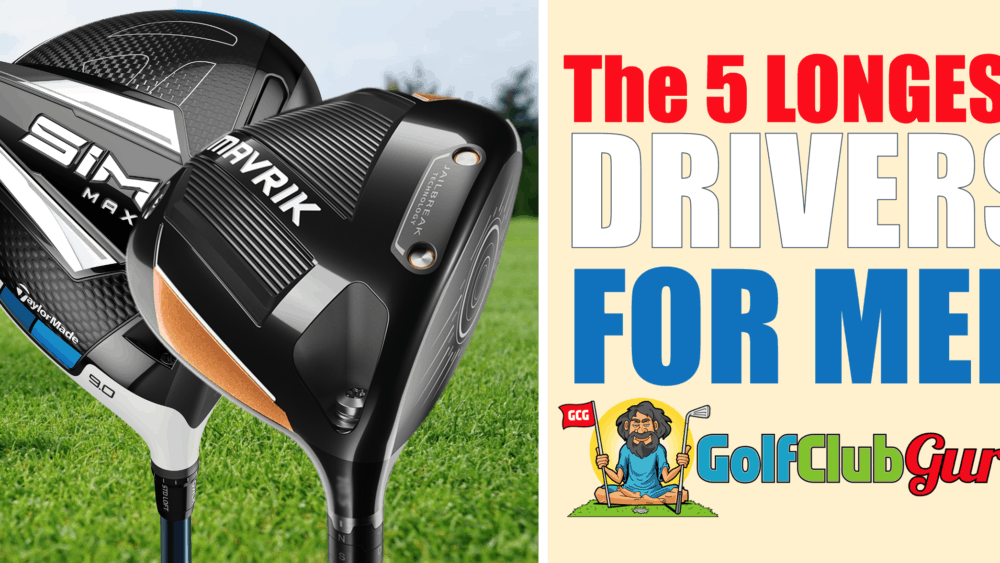 5 of the Longest Drivers for Men

There’s just something cool about pushing that extra bit of yardage off your drives. Increasing your club head speed is the best way to hit longer drives, but that’s not the only factor. Your driver head, driver shaft, technique, and angle of attack all make a difference. This article is all about the best driver HEADS (along with their off-the-rack shafts) for adding distance to your drives.

There’s a problem. Picking a driver can be tough. There are just so many apparent options out there on the marketplace that it’s easy to struggle to identify the one that’s perfect for you. So, let’s narrow it down to 5 that we believe are the longest drivers out there. And to make it easier, we’ll try to explain EXACTLY who should choose each driver. Just check out the last sentence of each driver’s review for “Who It’s Best For…”

First out of the bag is the TaylorMade SIM men’s driver, and this is one serious looking club to have in your arsenal. You just know that this one means business, and then, when you get it on the tee and see how the ball flies, it’s immediately apparent you won’t be disappointed.

The SIM part stands for Shape in Motion, and that’s more important than you think. The main thing is that they have made the soul asymmetrical, and the intention here is that it’s going to reduce the amount of downward drag at the end of the swing. By doing this, it means you generate more power in a controlled manner, so the ball is struck with more energy, and it then means more yardage. Sounds gimmicky, but I guess they did some tests and stuff to prove it. Lol, nah I’d stick with an older model TaylorMade driver personally, just from a financial standpoint.

At the same time, the center of gravity has been pushed back into the face and this optimizes the launch angle and power of the strike. However, there’s no doubt that the SIM drivers by TaylorMade are some of the best out there for men achieving greater distances than before.

The Callaway Mavrik driver is one of the latest to come off a rather impressive Callaway line of clubs, and this particular model is going to really replace the Rogue range.

It includes their Flash Face technology, and this is purely designed with the intention of generating more pace and energy when the club strikes the ball. The ability to reduce the amount of energy being lost at this point is key for more yardage, so Callaway has invested in some serious computer software to optimize this part as best they can.

Also, the club uses a carbon crown along with their Jailbreak Technology in this driver. This pushes the limits of what seems even possible for speed and power, so that can also squeeze out a few more yards.

Oh, and the Callaway Mavrik has a slight draw bias, so it’s a great option for those that are tired of slicing the ball. It won’t fix your slice all together, but it will encourage the club face to be more square (or more closed) at impact.

Overall, this is the kind of driver you would expect from Callaway, so if you love this brand and love distance, then you won’t be disappointed.

Mizuno has recently produced the ST200 line of drivers, and guess how many models there are… yep, 3.

This club has the real ability to add some impressive yards to your drive while also allowing you to maintain control over the swing and direction. With this model, you get a driver that produces a lower amount of spin which helps the ball to cut through the air and gain more yards.

The compact sole, mixed in with the 11.6g backweight adds to the stability that comes with this driver. The idea here is that greater stability means you can get a more true strike especially as this driver maintains its form throughout the entire swing. Being relatively lightweight, it does allow you to generate greater speed which also just pushes that yardage.

The Cobra King SpeedZone men’s driver has a special milled face which is going to give the ball a far more consistent flight through the air. It’s also going to result in incredible feel off the club face, which is hard to find in a driver. Lots of golfers play forged irons due to the feel, so why not play a milled face driver for a same great feeling when the ball impacts the face?

However, we are looking at distance, and that comes from the aerodynamics in the club head that allows it to move more smoothly through the air. They have also included a slight raise in both the front and back of the club with the intention of this reducing the amount of drag, and it seems to work pretty well.

Overall, if you have the Cobra F9, then this may not make much difference, but if you are currently gaming a super old driver, you’re sure to add 20+ yards of distance off the tee. Plus, compared to the other new drivers on the market, the Cobra King SpeedZone doesn’t have a sky high price tag, so this is a great option on a budget.

Who It’s Best For: Men looking for a great FEELING driver at impact, along with awesome distance and a fair price tag.

Finally, there’s the Wilson Staff Launch Pad, and this driver is aimed more at the men with a high handicap who are struggling to get to grips with their swing. The offset (extra distance between shaft and club face) will encourage the club face to close at impact, as opposed to an opened face slice that won’t travel very far. Not only is it going to be quite forgiving, it’s also incorporating a higher loft angle with the intention of helping to fight against the common slice.

The driver is also very lightweight, so that helps the new player where they slow down their swing trying to boost accuracy over power. However, with the sweet spot and control of the club, this is perhaps the perfect long driver for guys still trying to get to grips with hitting the ball straight and true off the tee.

Who It’s Best For: Newer golfers with slower swing speeds that fight a slice.

The problem some may have with the drivers mentioned above is the price tag, but we have you covered. If you want some extra distance without going the extra mile with the cost, then the Callaway XR16 is a great option. Is it as long as the Mavrik? Nah, but pretty dang close.

It’s from around 2016, which pushes the price down because back then, this club was held in high regard with tons of positive reviews. This club is inexpensive, super long, and lightweight allowing for greater speed through the swing with reduced twisting in the hands.

It comes with a 460cc head, and it is designed to reduce spin as this allows the ball to cut through the air without being slowed down with added drag. Also, it is seriously forgiving, so new players will love it as mishits will still end up playable.

Who It’s Best For: Men looking for a super long driver for around $100 (in slightly used condition).

These 5 (well, 6) drivers are all great options if you want a super long driver for men. You can’t go wrong with any of them. If you want to save even more money, pick up these drivers in slightly used condition on eBay or GlobalGolf.

So, what are your thoughts when it comes to the drivers listed above? Have you had any personal experience with them? If so, did you get greater yardage compared to other models on the market that you may have experience with? Let us know in the comments below.