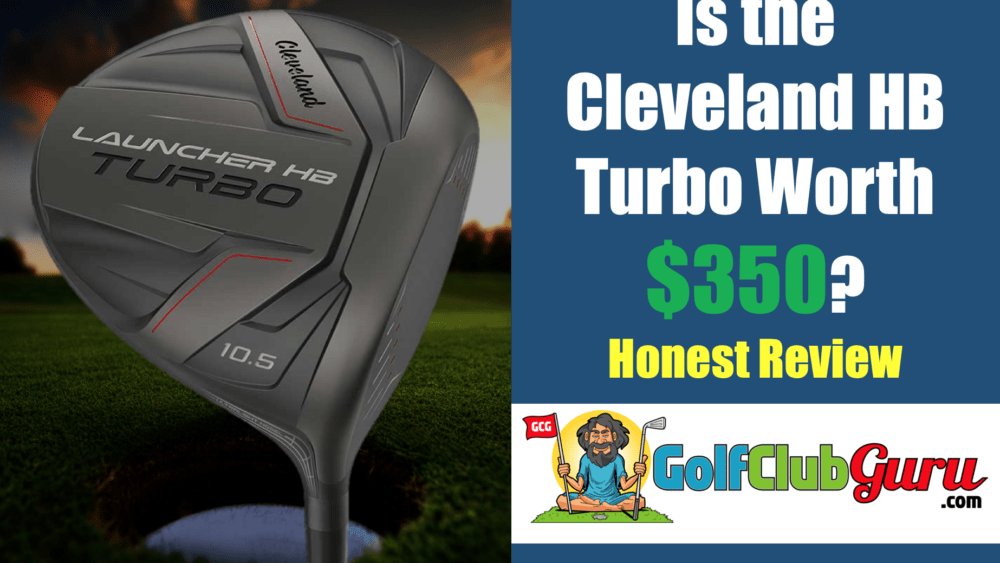 Is The Cleveland Launcher HB Turbo Driver Worth $350?

The newest release for Cleveland is the HB Turbo Driver. This is Cleveland’s attempt to add more ball speed to their clubs. Cleveland has always been a go-to when it comes to forgiveness and reliability, but they still fall behind a bit in the distance category.

The Turbo Driver was released at a price of $350, and although we will say that this driver is considerably longer than some of their past models, it is not worth $350 at this point. We will tell you who may want to spend $350 on this club and what other clubs you could potentially choose instead to save a bit of money.

Who Should Consider The HB Launcher Turbo?

If you are dead set on some new technology and feel as though $350 is not a bad price, the Launcher does have some great benefits. This driver comes with a turbocharged cup face to make the club even more forgiving but long as well. The ball speeds are longer on this club than in years past but still not to where some of the Callaway and TaylorMade options are. The HiBore crown makes this club forgiving and saves quite a bit of weight that could be redistributed down to the bottom of the club. The deep weighting helps to increase the launch.

So if you are a fan of Cleveland golf clubs, want some extra distance, and tons of forgiveness, the Cleveland Launcher HB Turbo driver is a good choice.

As we mentioned, the Launcher Turbo was an update to the original Cleveland Launcher Driver. Although it can be a little tricky to find the Launcher HB new, there are a few around. Also, the used options are priced right around $150 for an almost new club. So what is the big difference between the HB Turbo and the HB Launcher?

The HB Launcher continued the HiBore technologies that Cleveland has been using for several years. This is a very forgiving and easy to hit golf club. If you struggle with the launch, the HB Launcher has no trouble getting the ball up in the air. In addition to these benefits, the HB Launcher also has the same Cup Face technology that helps get that jump of the clubface you are looking for in your game. The weighting is almost precisely the same as the Launcher HB Turbo. The Launcher HB has a center of gravity that is low and in the back of the club. This is a crucial factor you will want when it comes to forgiveness.

The bottom line is that you will not notice that much of a difference between the HB Launcher and the HB Launcher Turbo. In all seriousness, it feels a bit like it was just time for Cleveland to release a new club. They made the Turbo look a bit more modern and gave it the gray/black finish all around, but the performance just does not warrant the price difference between the two golf clubs.

If you are looking for a driver at an even lower price, you may need to consider a used Callaway X Hot Driver. The concept and the technology behind the X Hot are very similar to the Launcher Turbo Driver, just a few years older.

Where we think the X Hot Driver likely outperforms the Turbo Launcher is the fact that it is an adjustable club. Anytime you can add some adjustability to a driver, it makes it like having more than one golf club in your bag. The Turbo Launcher and the Launcher HB we recommended not to have any adjustability.

The X Hot is a bit older as far as technology is concerned so that you may notice a few less yards in the distance from this club. However, when we say a few less yards, we only mean a few less. It’s hard to determine how much five or six yards of distance means to you when it comes to cost. If you can save $250, but hit it just a few yards less, would you go for it?

The Turbo Launcher HB Driver is designed to favor the player that slices the ball. With the X Hot being adjustable even if you are a golfer that hits the ball to the left, you can set the face to be slightly open to help you hit it straighter. The X Hot was released before all of the modern speed technology on the Mavrik and Rogue, but this club still has a thin face and a huge sweet spot.

Overall the Cleveland HB Launcher Turbo driver is not a bad golf club; it is just not worth the $350. Come back to us in a year or two when the pricing drops closer to $200, and we will be encouraging you to grab one of these before they are all gone!