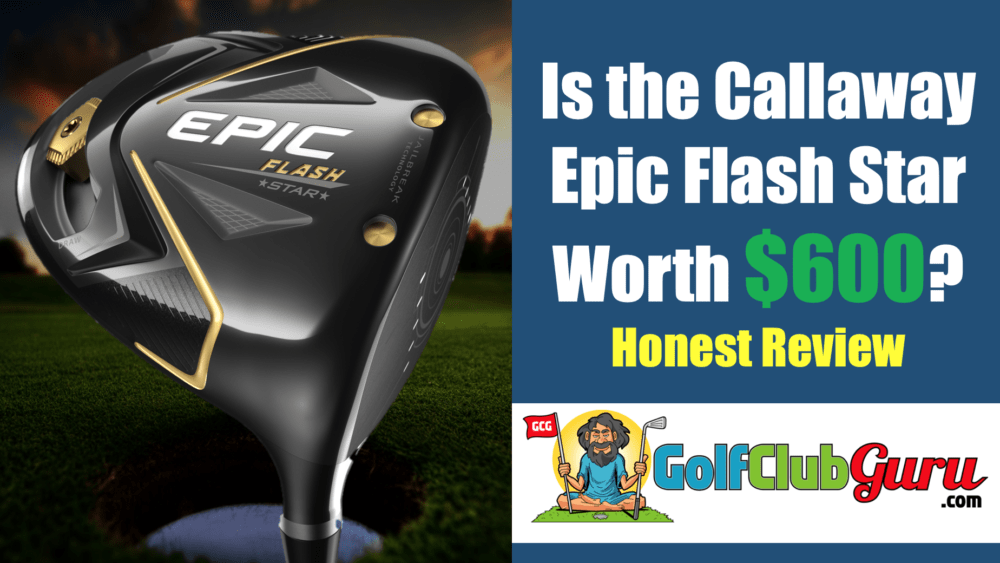 Is The Women’s Callaway Epic Flash Star Driver Worth $600?

No driver on this planet is worth anywhere near $600. There’s your answer.

You know how we like to be honest about these reviews and give you really useful information. Before we say too much more about this driver, let us mention that the current price is about $630. Yes, that is for one club. Don’t worry; we have the same sticker shock that you have. That’s why we put together this guide to let you know why on earth this driver is so expensive, and some great alternatives in case you wanted to fill a whole golf bag full of clubs for $630.

Who Is The Women’s Callaway Epic Flash Star Driver For?

No, in all seriousness, there is a specific player that this golf club would make sense for. The Callaway Epic Flash Star Driver is the lightest golf driver you could probably find. Where most driver shafts for women weigh around fifty grams, this one weighs 30grams. Thirty grams in a golf shaft is almost unheard of, and that is a big part of why this club costs so much money. This is a premium shaft.

The women’s Callaway Epic Flash Star Driver also has a much lighter crown, and it is not adjustable. The reason behind this is that the adjustable technology can actually be a bit heavy. By the time you add the weights and the screws, the weight will add up. Since the hosel is fixed and the head is much lighter, this driver is about fifty grams lighter than the regular Epic Flash driver. That is a lot of weight in a club!

The Epic Flash Star is all about getting more swing speed to get more ball speed. Callaway used artificial intelligence and machine learning to make this one of the longest golf clubs ever for the slow swinging golfer.

So if you struggle with distance and launch, and you have a slow swing speed, this club will be like magic. It better be for that price!

If you want to stick with a high-end Callaway driver and just knock a few hundred dollars off, you may want to look at the Callaway Rogue Women’s driver. There is no question that the Rogue is a little heavier than the Epic Flash Star, but it’s certainly not too heavy. The women’s Rogue will be built like any other women’s club on the market with a standard ladies shaft in it.

The Rogue driver comes with the jailbreak technology, and it is known for being extremely long. If your swing speed is average for a female golfer, this driver is a fantastic piece of technology that will give you results nearly just as good as the Epic Flash Star. You can pick up a Rogue in slightly used condition for around $250.

We know that the Epic Flash Star is probably going to be lighter than any other club out there. However, there are a few other drivers that focus on being lightweight and easy to hit, and they are certainly worth considering. The best option would be the Cobra F Max SuperLite Driver. This is the lightest driver that Cobra has ever put out, and they saved weight in the head, shaft, and grip of this club.

The F Max Superlite is built to give players both forgiveness and distance. We aren’t going to say that it will be as long as the Epic Flash Star, but the price on this driver brand new is about $199 compared to $629. If you like the Superlite, you could put three of them in the bag for the same price!

We have one more option for you if you are trying to keep the price down. The Cobra F Max Offset is a bit older then the Cobra Superlite Driver, but it is a very easy to hit and forgiving option. This driver should be priced less than $100 when purchased in slightly used condition, and it is a perfect club for someone looking for lightweight and forgiving.

The F Max offset is a very offset club that will make it entirely draw bias. If you tend to miss the ball to the right, this driver will absolutely help you to get the job done.

Clearly, the Callaway Epic Flash Star women’s driver is a very high priced driver. The problem we have with it is that it is a driver geared toward the high handicap slower swinging player. Typically speaking, these players will not notice small differences in golf club shafts and technology. If, however, this were a players driver for a low handicap that can feel the slightest change in a club with a blindfold on, then we may understand this marketing just a bit more. The whole thing seems a bit backward, and however premium the shaft is, this is just a lot of money to spend on one golf club.