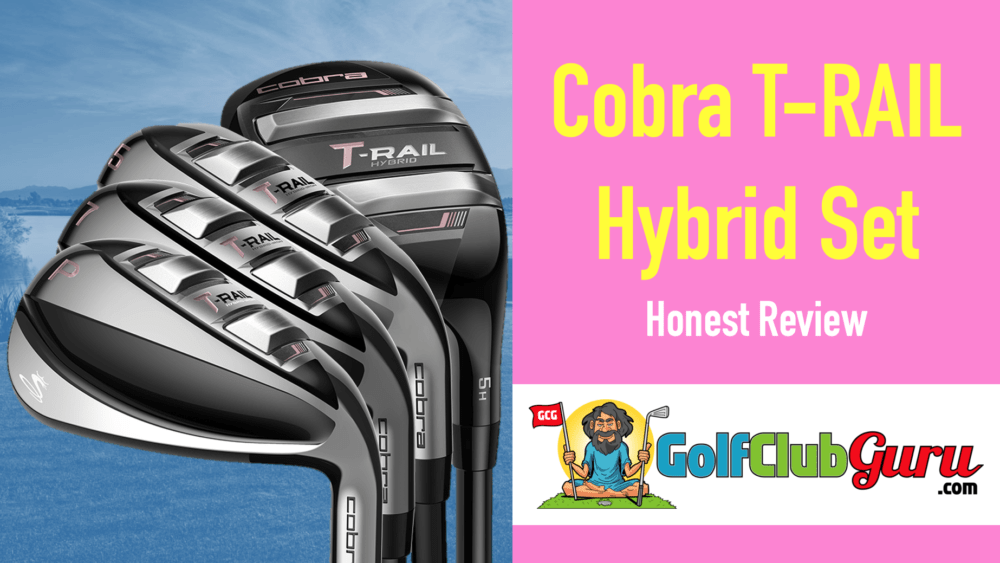 For a very long time, the Cleveland Launcher Hybrid irons were the only hybrid iron set on the market on the market. Players kept adding more and more hybrids to their golf bag, and eventually, there were just no irons left. Cleveland Launcher HB Irons were made to replace all the irons with a true hybrid iron. This year Cobra decided to come out with their idea of a hybrid iron, the T Rail. The Cobra T-Rail hybrid iron set is a very interesting combination of the famous Cobra Baffler Iron and some seriously forgiving F Max irons that Cobra has had around for years. The two combined, and the T Rail was born. We will give you our honest opinion on the T Rail Hybrid iron set as an option for an alternative should you so choose.

Although these club heads may look a little large and clunky, they are quite lightweight. The inside of the T Rail iron is hollow. The clubs are designed to give you the forgiveness and a launch of a hybrid (out of good or bad lies), but they should react like an iron when they hit the green. In other words, you don’t have to worry about the T Rail 8 iron running through the green; it should respond as a typical eight iron would.

The Baffler rails are really what make this club stand out. The rails are two hollow bars on the bottom of the club that help you guide through rough and fairway. Seriously, it does not matter your lie; the T Rail bars (Baffler Rails) help to improve turf interaction tremendously.

E9 Technology was included in these clubs in the form of a high strength steel face. The E9 technology essentially means that the face has a variable thickness. The variable face thickness helps to make sure that even your off-center hits will be headed somewhat in the vicinity of your target. There is no question this is a forgiving set of golf clubs. There is also a bit of offset to make sure that you can square that clubface up at impact.

It can take a little bit to get used to the look of the Cobra T Rail Hybrid. These irons almost look like they have a bubble coming out the back of them. For some players, this is going to be a boost of confidence, and for others, it is going to be a deal-breaker. We think they are a little tough to look at, but when you hit them, they feel much more like a traditional iron than you may think. This is a set of irons that you want to make sure you see a picture of the top-down look before purchasing.

This set is usually sold as a five hybrid (which looks more like a traditional hybrid) and then the 6-SW in the T Rail. They come with a Women’s Cobra Ultralight 45 shaft. This shaft is lightweight and performs well with this set of irons. The launch that this shaft provides is also quite high. Since the launch is quite high and these irons are easier than traditional irons to get the ball up in the air, Cobra did lower the lofts on this set. They are going to have modern lofting to try and help you get the ball as far as you can. Where the Airspeed irons have a pitching wedge that is closer to 46 degrees, the Cobra T Rail is more like 44 degrees. If you want distance and launch, this is the set for you.

The Downside & The Better Value Alternative

As always, we have the downside for you, and that is the price. You can almost tell by looking at this set that it is going to be expensive. The composition, the size of the club’s, everything just seems to look like it will add up. And it does. If you don’t want to spend so much on a set of golf clubs, there are a few other options you can take.

First, we suggest looking into building a hybrid set of irons for yourself purchasing some older used Cobra hybrids. You can usually find something like an F Max hybrid down to the seven iron. Then you only need to fill in a few extra irons.

Another option is to look for a set of Cleveland Launcher HB Hybrid iron set. You will have to find them used to save some money, but their technology is very similar to the Cobra T Rail hybrid iron set. Hybrid irons are not going to be that easy to find overall, you will need to do some searching to get a great set, but if it is the right choice for your game, the search will be worth it.