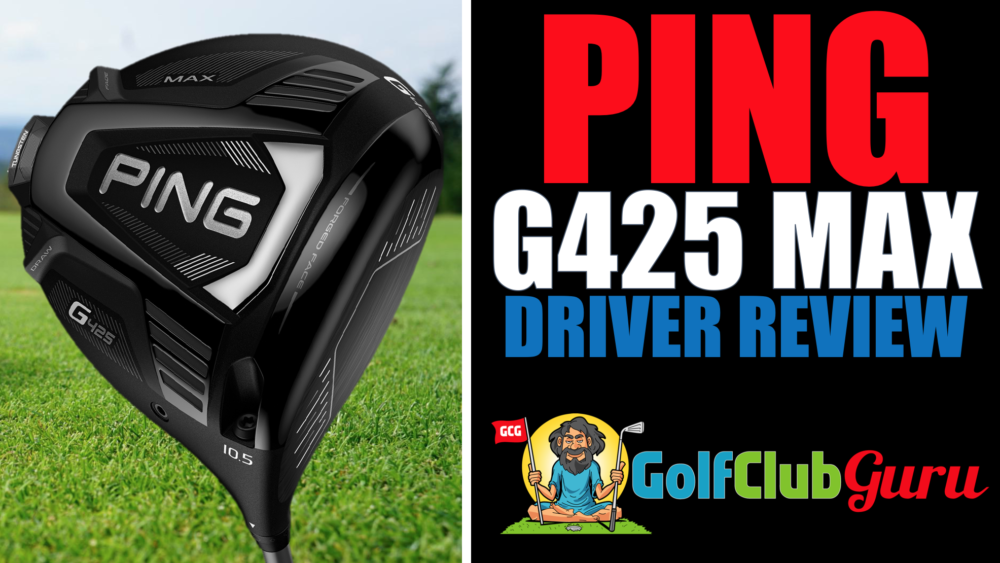 I love Ping drivers. Obviously they are pretty popular now, but they are still so underrated compared to other brands. Far too many golfers are still buying/supporting Callaway & TaylorMade, which continue to oversaturate the market 3 times a year with new releases that will “change the game forever”. Truthfully, I’d feel far better about supporting Ping & Titleist and the like.

Ping hasn’t released an all black driver since their Anser driver (correct me if I’m wrong). I generally like a little color, but appearance doesn’t make you score any lower anyway.

I’ve always thought that Ping driver heads seemed more oversized than other brands, probably due to a more “smushed”, wider head. I think this is a positive, as it gives you extra confidence in the forgiveness of the driver.

Obviously I won’t be able to tell you if the Ping G425 MAX driver is the one for YOU. However, I can give you my honest thoughts on the overall performance of the driver. Compared to recent Ping models (G410, G400, etc), you won’t see a big difference in performance. But if you are switching from a super outdated driver, then I can assure you that you’ll be pleasantly surprised by the gains in distance AND forgiveness.

I was truly shocked by the forgiveness on my off center drives. What would normally be penalized with an out of bounds drive still ended up flying relatively long and straight.

I’ve always thought that the majority of golfers need to be gaming a more forgiving driver, so this club is easy to recommend to golfers that want to hit more fairways. Is this the longest driver on the market? No, but it may be the most forgiving driver of 2021. That’s in part due to the highest MOI (moment of inertia) driver that Ping has ever released.

Compared to the Other Ping Models

The Ping G425 Max driver is best for those that want as much forgiveness as possible on your mishits. Let’s be real: you mishit your driver practically every single time. You hardly ever hit the dead center of the club face. For that reason, a forgiving driver for your mishits jut makes good sense.

If gaining an extra 5 yards is what you are looking for, this isn’t necessarily the one for you. But if you want an extra bit of forgiveness, then you can’t go wrong here.

This driver is best for those that want a new 2021 Ping driver, but don’t quite want the SFT (for slicers) or LST (for those that generate too much backspin on their drives).

And lastly, this driver is good fit for you if MONEY IS NO CONCERN. Spending $500 on a single club would make me lose sleep at night. If your sleep won’t be affected after handing over $500 for a driver, more power to you. If you are looking for the best value clubs on the market, then you came to the wrong place. Well, actually, you came to the right place, you just have to go to the next section of this article.

Oh, you want the Ping G425 Max driver, but you also want to save money, too? Hmmm…

There is actually a really simple way to save money without sacrificing practically any performance: just buy a slightly older model. The Ping G400 Max driver, which is new two releases old, can be picked up online for like $200. You simply can’t beat that value. Practically the same driver. Just a different name and paint job. Yes, the driver is slightly used, but even a used driver has a ton of life left. The savings are well worth it in my opinion.

No company makes major improvements from one release to the next. If that were the case, we’d all be hitting 300+ straight bombs all day. Improvements between releases are minimal at best. However, price differences are significant. A newly released driver can come with a price tag of $500 (like the Ping G425 Max) because the companies know that golfers are going to be hyped up for it and don’t want to wait for a price decrease.

However, if you can just force yourself to stay 2-5 years behind on new releases, you’ll save significant money without sacrificing distance and forgiveness.