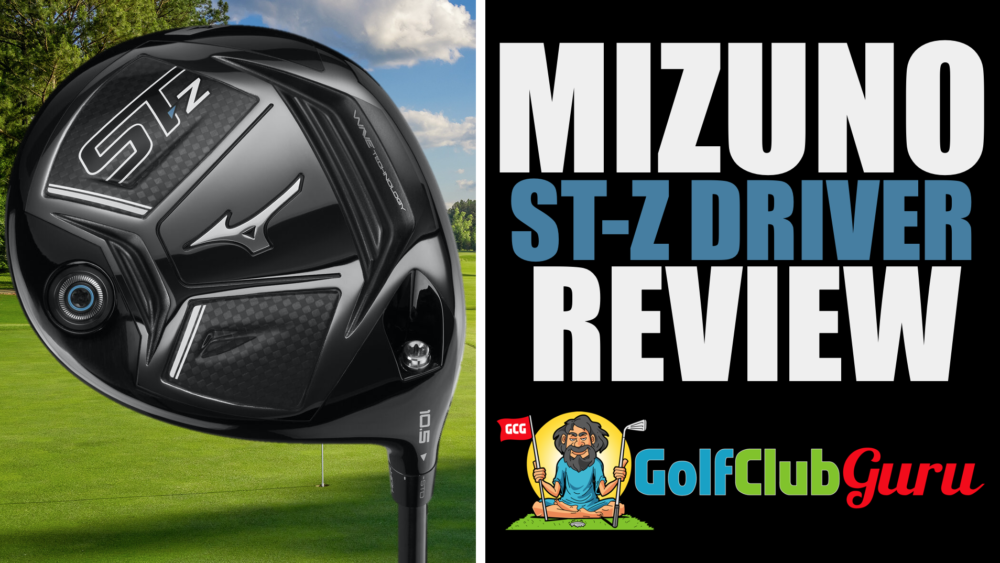 Mizuno’s history with drivers has been interesting to say the least.

There was a period of 10+ years where no Mizuno was played on the PGA tour at all. You may conclude that their drivers simply didn’t perform as well as brands like Callaway & TaylorMade. That might be part of it. But the larger reason is that other brands were willing to pay the big bucks to the tour guys to play their drivers. Mizuno just wasn’t willing to do so.

When it comes to performance, I’ll go ahead and tell you that Mizuno’s last couple of models (ST190 and ST200 drivers) will stand their ground against any other driver on the market. You’ll just have to get your hands on them to test it out.

Anyway, Mizuno just released a new round of drivers: the draw-biased Mizuno ST-X and the super-forgiving ST-Z. While they used to release new clubs closer to every 2 years, it seems as if they are leaning closer to every year now.

Here’s my honest review of the new 2021 Mizuno ST-Z Driver. It’s ShowTime. No literally, it is. That’s what the “ST” stands for.

At address, the checkered design is very similar to recent Callaway drivers like the Epic Speed. Overall, I’m a big fan, especially because Mizuno has released some pretty hideous crowns over the years. You just can’t go wrong with a shiny black crown, can you?

It’s got a very low footprint, as opposed to lower spin drivers that sit a little higher off the ground. And the centered (not towards the heel or toe) weight that’s far back on the club head also gives that away.

What can we expect from a clubhead that has the weight centered low and far back? Well, a few things. Lots of forgiveness for one. Higher launch for another. On average, straighter shots on your mishits compared to less forgiving clubs. Considering that just about every shot you hit is a slight mishit, I’d say this should be the more popular Mizuno driver of the two in the series.

Comparison to Other Mizuno Drivers (ST-X and Previous Models)

Listen: I just spent 12 minutes of my life watching the video that I attached below. You can watch it for yourself, or you can save 11 minutes of your life. I’ll sum it up in 1 minute, and you can do something more productive with your saved time. I can sum everything up in 4 sentences, just as the Mizuno engineer should have done. I guess Youtube doesn’t like 1 minute videos, though.

Here’s the video if you dare go against my recommendations! Just kidding.

Who The Mizuno ST-Z Driver Is Best For

It’s pretty obvious that Mizuno is targeting the Mizuno ST-Z driver towards golfers that just want to hit more fairways. If you are tired of missing left and right, then you will be better off with a more forgiving, lower center-of-gravity head like the ST-Z. Your mishits won’t be as badly penalized as a less-forgiving driver.

Truthfully, I’m a big proponent of drivers like the ST-Z. Golfers don’t need all the adjustability and sliding weights that many drivers come stock with now. Golfers don’t need the extra .5 inch in length that MAY add 1-2 yards to their drives -that small added length often results in a significant loss in consistency. Golfers don’t need a driver to “fix” their slice – fix your swing for goodness sake!

Don’t get me wrong: Mizuno drivers aren’t insanely over-expensive to begin with. It’s a brand that I really like, and I’d support them over Callaway or TaylorMade (who oversaturate the market) anyday. However, I’m more focused on saving money than I am on supporting a massive company. If you are like me, you may be on the lookout for a better value option.

For a similarly designed driver that will cost a fraction of the price, consider the Titleist 913 D2 driver. It’s practically the same exact driver. Hardly any differences at all. Slightly different club face construction, but that’s about it. I’d wager that with the same shaft and the same club head configuration, the Mizuno ST-Z and the Titleist 913 D2 driver will perform within 1% of each other in terms of distance and forgiveness.

The Mizuno ST-Z is $400, while you can pick up a slightly used Titleist 913 D2 with a great shaft for under $100. Seems like a no-brainer to me. But at the same time, I do understand the desire to buy a brand new driver that no-one else has ever hit before.

Thanks so much for reading my review of the Mizuno ST-Z driver! Do you have any comments or questions? Leave them below and I’ll get back to you ASAP.