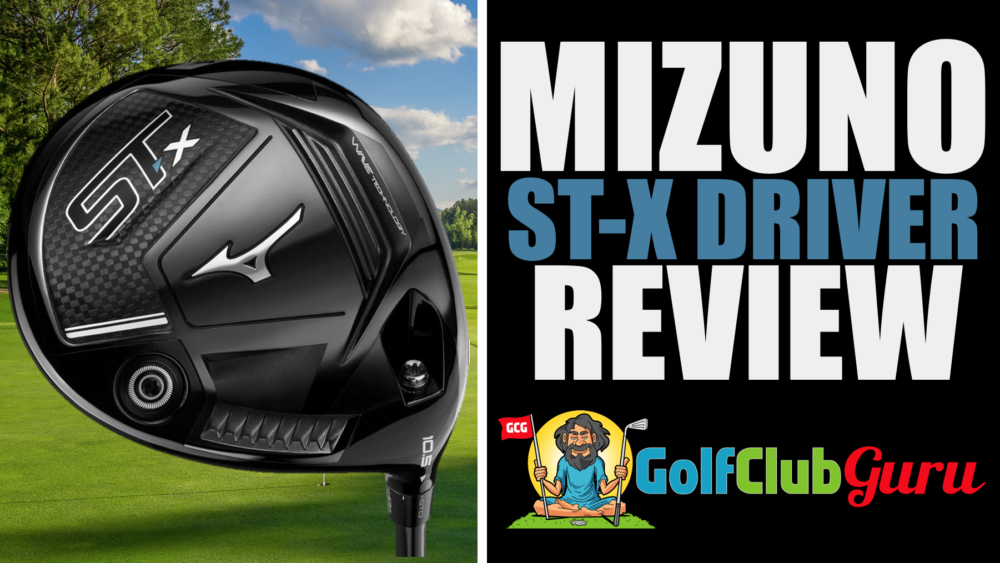 As seemingly every brand has done in the past year, Mizuno joins the pack and releases another draw-biased driver. The Mizuno ST-X driver is one of two drivers in the ST series – you can read about the more forgiving, straighter ST-Z driver here.

Although Mizuno is better known for their forged irons, their last 2 releases of drivers have done a decent job of trying to change that. The ST-190 and ST-200 series of drivers both saw improvements in the club face, and the ST series is no different. Slightly thinner faces have led to faster ball speeds and a better feel/sound at impact. To be fair, though, these improvements are hardly noticeable, especially for low to mid handicap golfers.

Here’s my unbiased review of the Mizuno ST-X driver.

Appearance: Overall, I’m a big fan of the look of the Mizuno ST-X driver. A very simplistic design without too many distractions, sliding weights, focal points, etc. Although I personally prefer an all-black crown, the checkered design isn’t too bad to look at while standing over the ball.

The ST-X has a slightly smaller profile than most drivers. Though it is still 460cc (the max cc), it doesn’t look like it due to the taller club head that doesn’t stretch as far as others. Most golfers prefer the LOOK of a more compact club head, while they prefer the PERFORMANCE of a larger club head (due to extra forgiveness). So it’s kind of a win-win, which is nice.

Performance: When it comes to performance, it’s going to be tough to give you any information pertinent to YOUR swing. We all have different bodies and different swings that react to clubs differently. However, we can absolutely give you general information on what you can expect from the Mizuno ST-X driver. As always, we strongly recommend that you get professionally fitted by a club fitter or at least a local PGA pro. There are thousands of Mizuno club fitters around the US that allow you to demo clubs. If you can afford it, do it.

The Mizuno ST-X driver is great at squaring the club face up at impact. The heel-positioned weight makes the toe of the club comparatively lighter, therefore making it easier to turn over at impact. It’s not a revolutionary design – hundreds of golf clubs have been designed the same way to help slicers and pushers correct their open club face at impact.

This driver comes in two different lofts: 10.5 and 12. This may sound like higher lofts than you are used to hearing. Keep in mind you can add or subtract 2 degrees of loft, so that 10.5 degree head could go down to 8.5 or up to 12.5. Also, higher lofts are typically better for golfers with slower swing speeds, which are typically the same crowd that slice the ball. So that’s why you see the higher lofts than normal.

This driver also comes in two different lengths: 45″ and 45.75″. I’d highly recommend the 45″ length, as it’s far more forgiving and easier to control. The extra .75″ will help you add a few yards on a perfectly struck shot, but you’ll no-doubt lose some control and consistency.

Who the Mizuno ST-X Driver Is Meant For

The Mizuno ST-X driver is meant for a golfer that is tired of missing right. If your miss is 80% or more to the right, then you will definitely benefit from a driver like this. The club face will naturally want to close easier, which will shift your misses a little bit to the left. However, I want to make one thing very clear. I’d always recommend a package of lessons before you buy a new driver to fix a miss to the right. You might just have a weak grip or bad swing plane.

The Mizuno ST-X Driver is:

If you want a lower priced, draw-biased driver that will launch the ball far and straight, check out the Ping G400 SFT driver. Ping’s drivers are absolutely top notch, and their SFT series is designed just like the Mizuno ST-X with the heel-positioned weight.

On average, I’d be willing to put money on the Ping G400 SFT performing better than the Mizuno ST-X when it comes to distance and forgiveness overall for slicers and pushers. Oh, and it’ll save you around $200 or so.