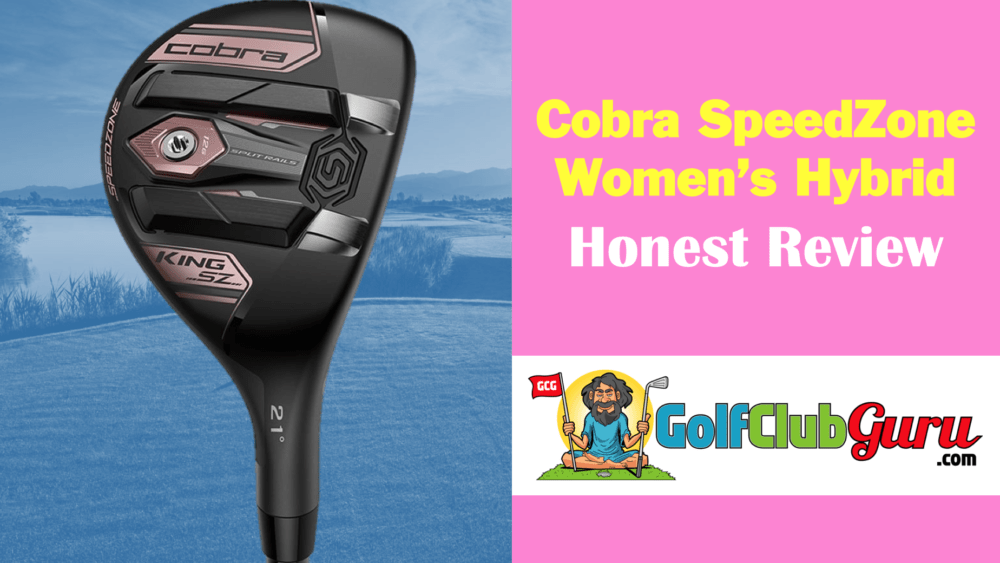 Every year more and more hybrids are added to the bags of female golfers. There is no shame in taking out those long irons and putting in clubs that are more forgiving and easier to launch. Hybrids are being made in higher and higher lofts, and some players are opting for complete sets of hybrids. The Cobra King Speedzone Ladies Hybrid is a brand new release for 2020, and there are some great benefits to this club. Here is our honest opinion on the Speedzone hybrid and an alternative in case you don’t want to spend a few hundred dollars on a hybrid right now.

Years ago, when Cobra created the Baffler technology, their hybrids were flying off the shelves. The rails on the bottom of the clubs were designed to generate better turf interaction and help the hybrid cut through any type of lie, including fairway shots. Baffler rail technology has changed slightly through the years, and now they have introduced the Hollow Split Rails. These rails flex more than previous models and help to increase clubhead speed as well.

The weighting on this Cobra Speedzone Women’s hybrid is low and in the back. This will help if you struggle to get the ball high enough into the air. Some female golfers think that low ball flight will help them to get distance. Although this can sometimes be true, distance on a golf ball that runs through a putting green is not going to help anyone’s game. Even though you want your hybrid to travel far, it needs to stop when it hits the green.

This Speedzone Hybrid is slightly larger than previous models. If you like a slimmer more player profile look to your hybrids, this is not the club for you. However, if you don’t mind a larger club head, you will benefit from a larger sweet spot and a higher moment of inertia.

Perhaps our favorite feature of all the Cobra Speedzone clubs is the Cobra Connect technology. You can log into your app on your phone and see how your Speedzone irons are performing. This becomes important when you have to narrow down your yardages. You would be amazed how many female golfers have no idea how far they hit their clubs. Sometimes we get so accustomed to our golf course and what clubs we play that we forget or don’t even learn our yardages. It is crucial to know how far each club in your bag goes. If you don’t have these numbers down, you may end up hitting lay-up shots to the wrong spot, choosing the wrong club on a Par 3, and just costing yourself strokes.

There are several different lofts available in the Speedzone Ladies Hybrid, and the lofts are not adjustable. The Speedzone hybrids come with a UST Recoil 53 gram shaft. We think this is an excellent option on a hybrid as it gives just a bit more weight than a traditional iron, which will help you stay down and through the shot in those tough lies.

The only real problem with the Speedzone hybrids is the price. They are a new release, so the pricing is very high on them at the moment. The good news is that we have an alternative. If you like the look and the performance of the Speedzone but want to save a few dollars, look for an F8 hybrid.

The Cobra King F8 hybrid is a few years old, but it still has the rail technology, and although it is not the longest club on the market, it is incredibly accurate. The F8 has been known as one of Cobra’s straightest clubs ever created. If you don’t know which way your hybrid shots are going to land, this is the right choice for you. Since this is a few years old, you will likely have to purchase this club used, but that will only save you more money. Used golf clubs are perfectly fine as long as the shaft and the clubface are in good condition.

Yes or No to the Speedzone Hybrid?

We are going to have to say not yet. The Cobra King Women’s Speedzone Hybrid is just priced too high to make it worth the money at the moment. As Cobra drops the pricing on this club, it is certainly worth adding one to your bag. We cannot see enough of a difference between this hybrid and the hybrids from last year to justify spending the high price on this club. Once this drops down to the same price or less than the F9, then it will be a great buy.