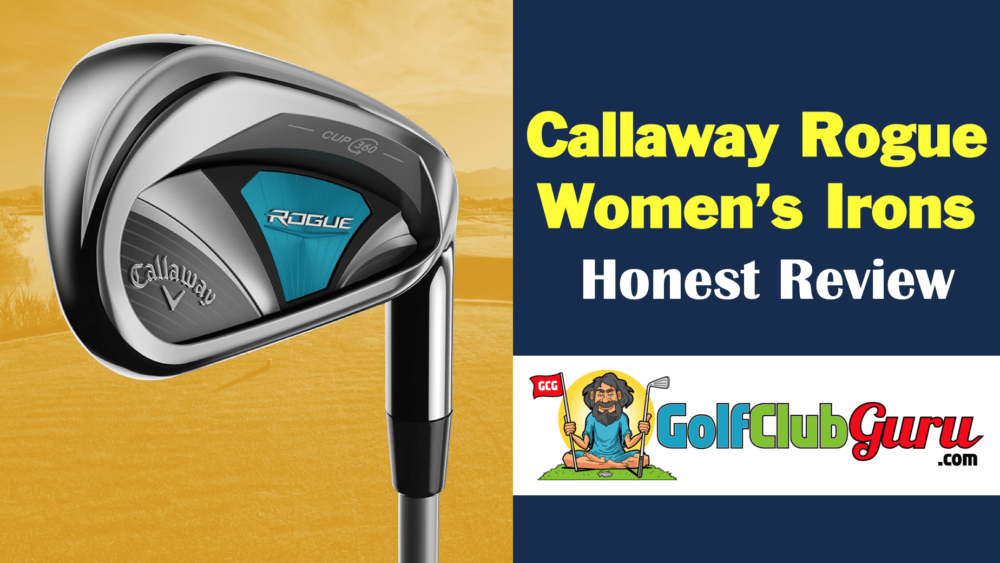 The Callaway Rogue women’s golf irons were released last year, but they are still readily available for purchase and come at a decreased price as well. If you have been thinking about investing in a new set of irons, the Rogue is undoubtedly an option to consider. These golf irons are not a men’s golf club with a female shaft put in them, Callaway specifically designed the clubhead to work for women. We will give you a rundown on why this club may work for you and an alternative option should you not want to spend as much as this set costs.

The Callaway Rogue ladies irons feature the 360 Face Cup technology that gives players the forgiveness they need most in the areas they need it the most. Mid to high handicap golfers tend to struggle with missing the ball on the lower left heel or upper right toe. The Face Cup combined with the VFT (Variable Face Thickness) will undoubtedly produce one of the most forgiving club faces on the market.

One of the most significant issues with a cavity back forgiving iron is feel. It seems as though the more forgiving a club gets, the worse they feel. Callaway has noticed this and started to work towards making the feel on their irons that much better. To eliminate some of the vibration in this cavity back set of clubs, they introduced the Urethane Microsphere technology. These tiny microspheres are installed in the clubhead to help dampen any vibration at impact. Although the Rogue is not going to feel like a forged iron, they will feel better than an iron from a few years back.

The Callaway Rogue irons are made from a four-iron to a sand wedge. We recommend going with a mix of hybrids (see the picture above) and irons to get the most forgiving set across the board. The shaft in the Callaway Rogue Irons are the Synergy 50 gram graphite shafts. This is a great shaft with the perfect weighting for a woman’s set of irons. Rogue irons have modern lofting.

You can expect that these will go further than your current clubs because the lofts are adjusted. What you think of as a typical seven iron is probably the same loft as the eight iron in the Rogue iron. This worries some players because of the ball flight issues that could be created by this loft adjustment. Luckily, Callaway lowered the center of gravity and added in the low kick point shaft, to help make up for the launch. The Rogue irons should launch plenty high to get optimal distance and land and stop where you want them to.

It’s worth mentioning that we strongly recommend getting professional fitted for your clubs. If you are going to shell out enough money to buy these clubs, you might as well spend a little more and make sure you are getting fitted for the right club heads and shafts.

The Rogue Irons have come down in price quite a bit since their initial launch. It is hard for us to say that this is a bad buy because they are priced pretty reasonably for the technology that they offer. That being said, if you were looking to spend a bit less than this on a set of new irons, take a look for a used set of TaylorMade Kalea irons.

As we mentioned with the Callaway Rogue golf clubs, not all companies make iron sets specifically designed for women. Many are designed for men and then just have a ladies golf shaft put in them. The TaylorMade Kalea set was the first set of golf clubs TaylorMade ever produced specifically for women. The Kalea set has changed a few times through the years, but there are plenty of used sets of Kalea irons on the market to choose from.

These clubs are very lightweight and will absolutely help to increase clubhead speed. They actually have the same speed pocket technology that was used on the TaylorMade M series and the new TaylorMade SIM series. The Kalea shafts are built with a low kick point to help a player achieve optimal launch. Although the Kalea is not a Callaway brand, you will see that the focus on these irons is both distance and forgiveness, making them very similar to the Rogue.

Are The Callaway Rogue Irons Worth It?

We always try to be as honest as possible with these reviews. When it comes to the Rogue irons, although the price may be higher than you had hoped for, you get a lot of technology for the money. If you had asked us this question a year ago when they first came out, we might have told you to wait it out a bit. At this point, for a high-end iron, with a graphite shaft and this much feel and forgiveness, you are getting a good deal with the Callaway Rogue womens irons.