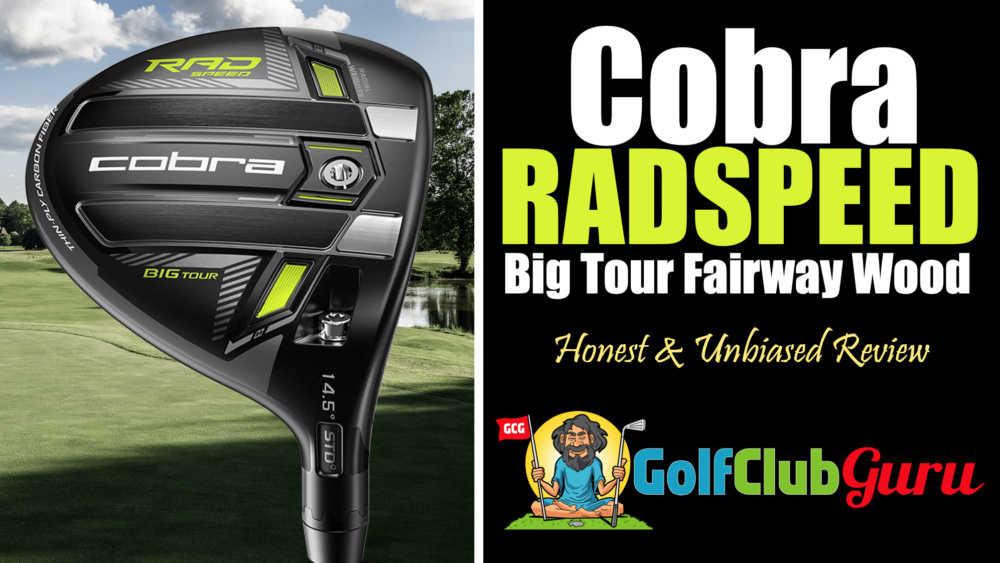 With their new RADSPEED line of clubs, Cobra has releases a fourth model: the Big Tour. This is just the second version of the Big Tour model (the first models was the SpeedZone Big Tour last year).

Big: the Big Tour fairway wood is slightly oversized compared to the other three models. Personally I’m a fan of slightly larger woods. Smaller profiles are typically more versatile, but versatility isn’t a huge benefit in my opinion. After all, I don’t find myself reaching for my fairway wood on a bad lie very often.

Tour: versions that have the word “tour” on them typically mean they are slightly smaller profile (not in this case) and the weight is positioned more towards the front of the club for a lower spinning/launching club (that IS the case here).

While the Cobra RADSPEED fairway wood (the regular model) comes in two color options, unfortunately the Big Tour version only comes in the black/green color scheme. Not a huge deal, but I was just a big fan of the red/white/blue model. Small bummer.

At 173cc, it’s just a big larger than the regular RADSPEED model. It’s strange that the largest profile head in the RADSPEED line is a low-launching, forward-weighted design. Typically, the largest profile head (which is meant to be as forgiving as possible) is found on a high-launching club head with the weight focused low and far back from the club face to be easier to hit.

The weights on the bottom of the club head will tell you a lot about a club. The forward weight is a dead giveaway that the club will be lower-launching than most fairway woods that have the weight located on the back of the club head.

I really like the sole design of the RADSPEED fairway woods. Very flat soles that look far more forgiving to me at address. Even if you miss the center of the club face by half an inch, you can tell that you won’t be punished too badly.

This is the part that really matters, right? Correct.

Unfortunately, I can only give you my personal experience – and I’m willing to bet we have different swings, different playing styles, different abilities, and different desires when it comes to picking clubs. However, I can definitely give you general things to expect with the Cobra RADSPEED Big Tour fairway woods.

If you are looking for a penetrating ball flight, then I truly can’t recommend this club enough. If you currently hit the ball far too high and far too spinny, then I’m willing to bet that you’ll be thrilled with the Big Tour fairway wood due to the low launching, low spin head.

While demoing, I hit some of the “sexiest” fairway shots that I’ve ever hit. Very low, penetrating ball flights that didn’t seem to be effected by the wind whatsoever.

Keep in mind that there aren’t many golfers that need a low-spin fairway wood. Contrary to popular belief, most golfers need MORE spin on their fairway woods, as they aren’t generating enough club head speed to launch the low-lofted clubs high enough in the air to maximize distance.

Overall, I was really very happy with the distance, forgiveness, and feel of the Cobra RADSPEED Big Tour fairway. With a slightly strong loft (14.5 compared to the typical 15), you are sure to launch the ball far AS LONG AS you can get the ball high enough in the air.

While I’m sure it’s not quite as versatile or workable as the Tour model, I’d still pick the Big Tour over the Tour any day, for just about every golfer. Versatility and workability should be at the bottom of your list when picking the best fairway wood for you. But keep in mind that most amateur golfers should really be playing the more forgiving, higher-launching RADSPEED or RADSPEED Draw fairway wood.

The Cobra RADSPEED Big Tour fairway wood is best for a golfer with a fast club head speed that wants a low spinning/low launching head without giving up on forgiveness. While most low spin/launch heads are small and unforgiving, the Big Tour model combines low launch/spin in a more forgiving, oversized head. If you have a fast club head speed and generate too much backspin with your current fairway wood, then definitely give the Cobra RADSPEED Big Tour fairway a try.

Again, I want to stress that many golfers THINK that they need a low launching head, when really they just need to work on their swing. Many golfers simply hit too far down on their fairway wood, which launches the ball high and spinny. They think they need a low spinning head, when really they just need to make a more positive angle of attack on the golf ball (hit less down on it). The large majority of golfers simply don’t create enough club head speed to benefit from a low spin, low launch head. Here’s a great article for the large majority of golfers that want a super forgiving, easy to hit fairway wood.

Compared to Other RADSPEED Fairway Woods

Four different models in one series is a LOT for fairway woods. It can be hard to compare them all apples to apples. I’ll do my best to show you the differences below.

Like I’ve mentioned before, it can be hard to find a low spinning fairway wood with an oversized shape. However, this is thankfully not the first “Big Tour” fairway wood that Cobra has released. Their last line of clubs (SPEEDZONE) was the first series to include the Big Tour fairway wood. Although it’s not super, super cheap, you can still save some money by going with the older model. You can buy the Cobra SPEEDZONE Big Tour fairway wood new for $200 or slightly used for around $140-160.