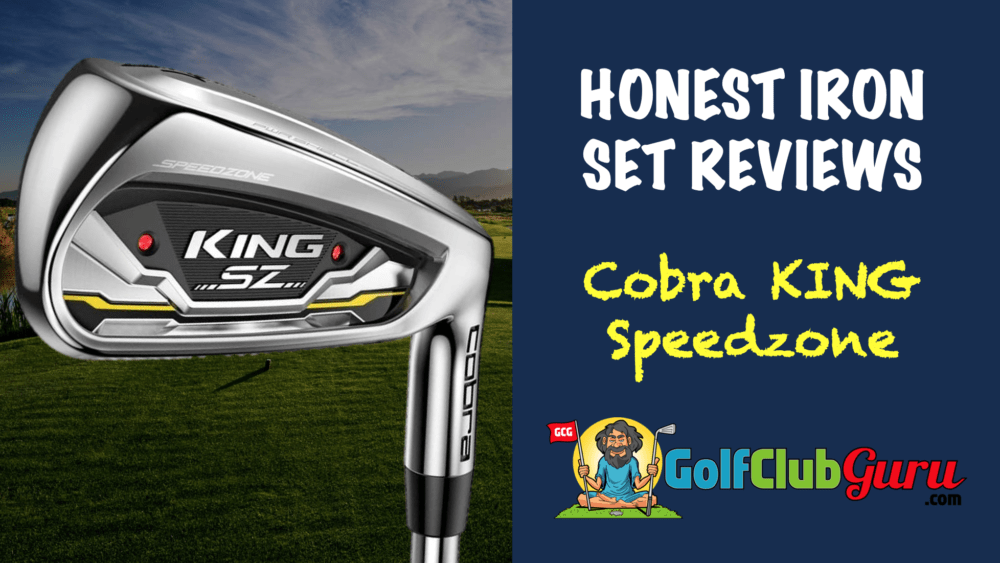 A new iron set touting “super speed, crazy distance, incredible forgiveness.” These golf companies sound like a broken record, don’t you think? Don’t get us wrong: the Cobra King Speedzone irons are great. But they aren’t that much better than iron sets 1/5 of the price that were produced 2-5 years ago by reputable companies.

As you can probably tell, we aren’t great at selling you on the newest, latest golf clubs. We try to be honest. We’re more worried about saving you money. Nonetheless, we’ll give you an honest review of the Cobra Kind Speedzone irons.

Oh, you wanted a good looking, compact iron set? Who are you kidding? This is a game improvement iron set. The club heads will be square and chunky. The Cobra Kind Speedzone irons don’t scream “attractive”, but they do scream “easy to hit”. All of the perimeter weighting and thick toplines make it obvious that they care more about making a forgiving iron, as opposed to a workable players iron.

What we hate the most about the appearance? The god awful carbon fiber insert on the 3-7 irons. They say the lower weight allows for faster ball speeds, but the difference is probably .00000001 mph. Not worth it in exchange for the terrible appearance at address. Looks gimmicky in our opinion.

Aside from the carbon fiber insert, the rest of the appearance at address is great. A tad bit of offset – not too little, not too much.

Performance: Long and Forgiving (As Expected), But Poor Feel

Performance is really all that should matter. The Cobra King Speedzone irons perform great – they are long and forgiving, just as most game improvement irons are these days. They suck when it comes to feel at impact. However, that’s to be expected with any cast iron game improvement set.

Golf is all about controlling your misses, especially if you struggle with hitting the center of the club face consistently. A large sweet spot and more perimeter weighting ensures that your misses won’t be punished as badly as possible. The Cobra King Speedzone performed well even on hits near the heel and toe of the club. The feel on those shots was terrible, but the result wasn’t far off from perfectly struck shots.

When it comes to distance, this set is just as long as any other game improvement set produced in the past couple of years. We’re talking a difference of less than 5 yards here ladies and gents – nothing to stress about. While some companies choose to make their 6 irons “7 irons” to make you think you gained 10 yards, cobra has reasonable lofts.

I did feel like the height on my shots with the Cobra King Speedzone irons was higher than most other irons sets that I’ve tested, but your results may vary depending on your swing and shaft choice.

When it comes to feel, this set isn’t the best. After all, it’s a set of cast-iron game improvement clubs. The focus is more on distance and forgiveness, not on feel and workability. As a result, the feel at impact is a little unfortunate. Sounds a little dead at impact, and that sounds translates as poor feel throughout your body when you make contact. Not a huge deal, especially when you get better results on mishits in exchange.

You probably won’t be able to guess it, but the only difference is the length of the shafts here. Personally, I don’t like one length clubs. The short irons feel too long, and the long irons feel too short. Maybe I’m just too traditional – who knows.

Most people either love or hate one length irons like the Cobra King Speedzone ONE length iron set. Here’s my advice to you: do NOT buy one length irons unless you have already tried them out yourself. Don’t take anyone else’s word for it. Promise me that… ok?? I’d hate for you to buy one length clubs, hate them, and then be stuck with them or have to sell them for a fraction of your purchase price.

We don’t take price lightly. As a result, we never recommend golfers spend anywhere near $1000 for a set of iron. Hell, we encourage golfers to find entire sets of name brand clubs for less than $500. Regardless, we know that other golfers like to spend more money to make them thing it will result in lower scores. Who needs to practice anymore when you can just buy expensive clubs instead?

The price for an entire set of the Cobra King Speedzone irons is about $1,150. Is it worth it in our opinion? Not even close. You can pick up a slightly used set of irons, like on on our best on a budget list of iron sets, for ~$250. They’d perform nearly the same in every regard. The main difference would be a different paint job.

For example, we’d recommend the Cobra King F8 irons, either the regular or ONE Length option, depending on which interests you more. They were made about 2-3 years ago, they perform great, and you can pick up a like new set for $250 today. Instant savings of nearly $1,000. You’re welcome.

The Cobra King Speedzone iron set is great for a mid-to-high handicap golfer that needs the extra forgiveness and distance on iron shots. There are lots of similar, cheaper options on the market, but you might want a new set that is sure to last you hundreds of rounds.