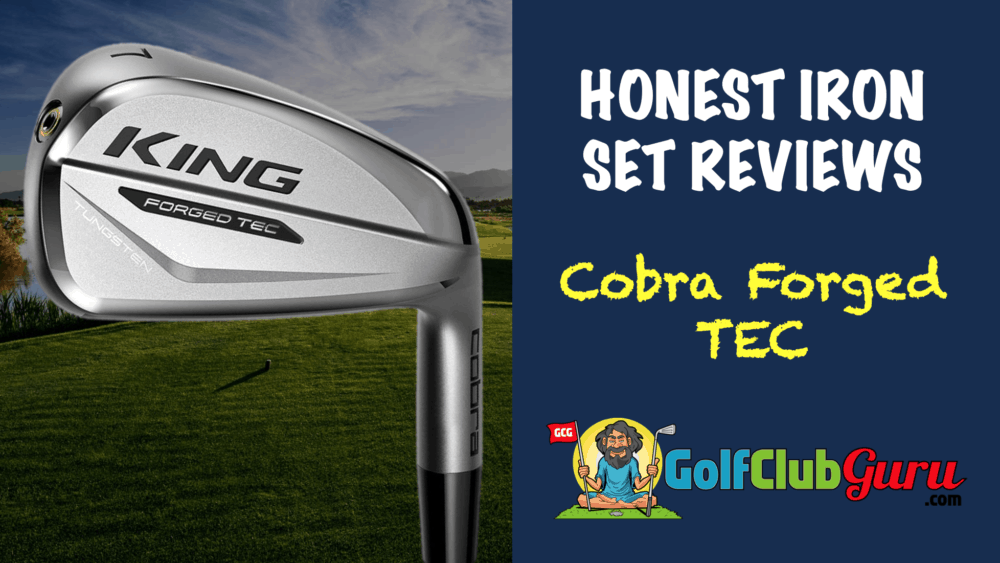 The new Cobra KING Forged Tec irons are sweet. They look sweet, with their compact club heads and thin toplines. Oh and they feel sweet with their forged design. Lastly, Cobra is capitalizing on the rise of popularity of player’s distance irons, so this set was designed to be long, too.

What more could you ask for? Well, the price is over $1,000, so you could ask for a more reasonable price for a start. Don’t get me wrong: the Cobra KING Forged Tec irons are crazy impressive all around. However, we just can’t in our right minds recommend an iron set carrying this price tag, especially when there are similar irons on the market for half the price.

Regardless, we will still give an honest review of the Cobra KING Forged Tec and Cobra King Forged Tec One Length irons. Let’s get started, shall we?

Appearance: A Beauty, But a Little Daunting for Some

If this isn’t your first time with a set of players irons like the Cobra KING Forged Tec irons, then you’ll be used to the compact club heads and thin toplines. This set is absolutely beautiful at address. It’s hard to deny the attractiveness of the small club heads. However, if you are not used to a thin players iron, this set can be a little daunting at address. It screams “unforgiving”, which can scare a high or mid handicap golfer away pretty easily.

The toplines are not as thin as your average blade iron, but they are very thin compared to other players irons. In our opinion, one of the best ways to improve your ballstriking is to use a set of unforgiving irons like this set. A set like this will require you to hit the center of the clubface to score well. Obviously, we wouldn’t recommend this unless you are OK with not scoring as well for a while. You can always go back to a more forgiving set down the road – you’ll be blown away at how easy the switch will be compared to your less forgiving set.

We were blown away by the performance of the Cobra KING Forged Tec Irons. They are the perfect combination of control, distance, and feel that many mid to low handicap golfers are looking for.

Control: With the forged design, your distance control will be much better than a cast iron set of clubs. Using the more expensive forging process, the end result is less air bubbles and therefore more consistent distance control. If you are looking to improve your iron game, you know how important distance control can be to making more pars and birdies.

Distance: Cobra is obviously trying to capitalize on the increase in popularity of “distance players irons”. They know that even better players want more distance, and they aren’t wrong. The Cobra King Forged Tec irons are longer than your average players iron for sure, due to a thin club face that maximizes ball speeds. To be fair, though, the difference is minimal, so we won’t get carried away.

Workability: Although workability is nearly a thing of the past, these irons are extremely workable if you want them to be. Unlike game improvement irons that are made to go as straight as possible, a set of players irons like this will allow you to hit draws and fades much easier. Most golfers nowadays would rather be long and straight then focus on hitting draws & fades on the spot, though.

Feel: When it comes to feel, you’ll likely be blown away at just how little you feel/hear at impact on center strikes. It feels like butter at impact. The ball just gets in the way of your golf swing – just the way it should be. That’s one of the main benefits of forged irons.

They are identical sets, except one set has shafts that are all the same length, and the other has shafts that are longer as the loft decreases. The one length irons are all the length of a standard 7 iron. Personally, I’m not a big fan of ONE length irons. Hitting a PW with a length of a 7 iron feels terrible. Most good golfers make their birdies with shorter irons, and the shorter shafts improve control. As a result, I feel more confident that I’d make more birdies over the long-haul with a standard iron set with varying length shafts.

I’m sure anyone could get used to them over time. However, making short irons a tad bit harder to hit doesn’t sound enticing to me in any shape or form.

However, many golfers LOVE one length irons for their consistency. It’s a love or hate sort of thing. As we’ve mentioned in many other articles, we don’t recommend one length irons unless you’ve actually tried them and love them.

Price: $1,100 – There Are Better Value Alternatives

The price of the Cobra King Forged Tec irons is about $1,100. That may sound somewhat reasonable to you. We completely disagree. We don’t recommend any golfer spends half of that amount on a set of clubs, let alone just on irons. We are huge proponents of golf clubs that are 2-5 years old and 25% of the price of new releases.

If you want a similar set of irons for a fraction of the price, check out the Cobra King Forged set of irons. They were released about 3 years ago. Practically the same set of irons. Different paint job. Slightly less long – but not by much. You’ll have to be the judge about whether the extra few yards would be worth the extra $600 or so. We don’t think so.

The Cobra KING Forged Tec irons are a great set of irons for low handicap golfers that need the extra control and like the small compact club heads. They could also be great for mid to high handicap golfers that want to improve their ball striking by forcing them to hit the center of the club head. Although there are slightly used sets out there for half of the price, you may prefer a new set like this to last you nearly a lifetime.