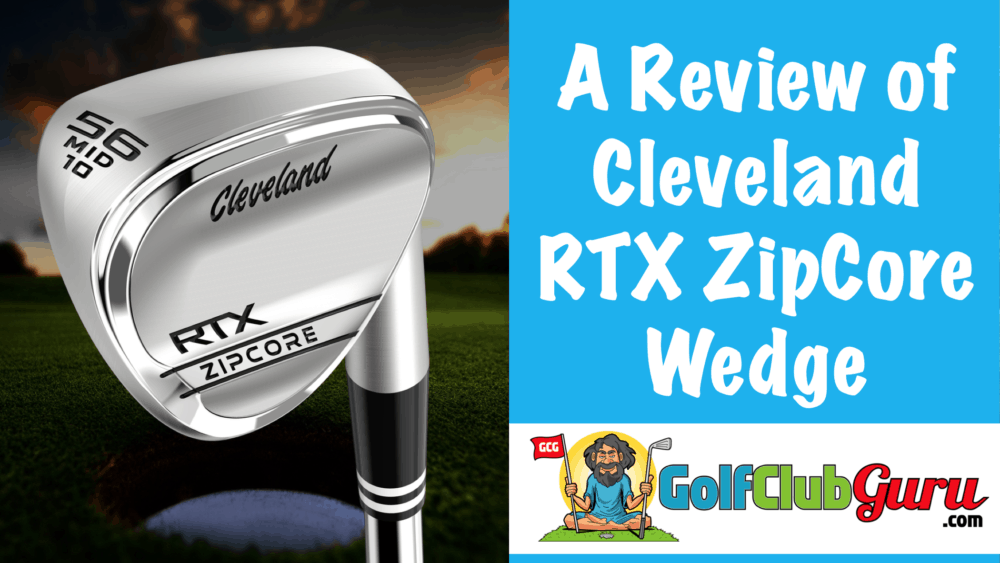 You are looking for an honest review of the Cleveland RTX ZipCore wedge, right? So, you don’t want an ad sponsored by Cleveland, I’m guessing. And I’m guessing you don’t want us to spew back the same (but paraphrased) marketing mumbo-jumbo that Cleveland posts on their website. Well, good, then that is what we will do.

Cleveland makes some damn good wedges. But this wedge is no better than the previous 2-3 models that they have released. Our suggestion: buy a slightly older model.

Here’s what Cleveland says about the new wedges, and then we’ll give our unbiased thoughts.

They say: “We have torn our flagship RTX wedge down to its core and rebuilt it from the inside out.”

They say:  “RTX ZipCore wedges perform better on shots struck both low and high in the face, and the size of the sweet spot is increased. The end result: more consistent spin, distance, and feel.”

They say: “RTX ZipCore wedges are also equipped with the brand’s all-new UltiZip Grooves. According to Cleveland, the UltiZip Grooves are 11 percent sharper and 7.3 percent deeper than previous generations as well as 7.4 percent closer together for more a larger groove contact area (and thus more spin).”

They say: “RTX ZipCore wedges feature a new heat treatment, which is intended to boost durability and guard against a decrease in spin performance over time.”

In simple terms, here is what Cleveland has done with the RTX ZipCore, compared to the previous model (RTX 4).

They also added a groove (from 17 to 18) from their previous model. Should result in a littttttttttle bit more spin. Big whoop. Again, you won’t notice a difference.

They have gone back to three sole options: Low (6 degrees), Mid (10 degrees), and Full Bounce (12 degrees). You can’t get extra low bounce anymore, which is a good thing in my opinion. Mid grinds are by far the most common. Low bounce is typically for better ballstrikers, while full bounce is best for those that find themselves in bunkers on a regular basis.

Won’t lie to you. When I first saw the Cleveland RTX ZipCore wedge, it looked like the TaylorMade 790 irons. MyGolfSpy had the same thoughts apparently. This is because they moved the weight higher on the club face and towards the toe, which is what 790 did too.

They are currently only available in Tour Satin, but Cleveland says Black Satin and Raw finishes are coming soon. I’ve always been a fan of Black Satin, but that’s just me. A random guy on the internet.

The toe of the club face is a little overwhelming to be honest, with all of the pointless grooves. I wish they had just made it smooth like most of their wedges. I’m sure they just wanted to mix it up by putting in the grooves to make you think they are somehow helping. I hope you don’t hit the ball that far on the toe, though.

At a price tag of $150, I’m not a huge fan of the Cleveland RTX ZipCore. It’s obviously a great club, but so are the previous 2-4 models of clubs that Cleveland released. So why spend $150 when you can spend $80 and get practically the same club in the Cleveland CBX wedge? That’s what I’m saying!

Here’s how it works in the golf world if you keep buying new clubs that were just released. Whenever you think you have the absolute BEST wedge, it’s almost a guarantee that next year, a new wedge will come out that is even BETTER.  I can’t afford to buy new wedges every year… can you?

There is nothing wrong with companies releasing new wedges every year. There IS a problem if you keep buying the new releases thinking that they will make a noticeable difference in your game, though.