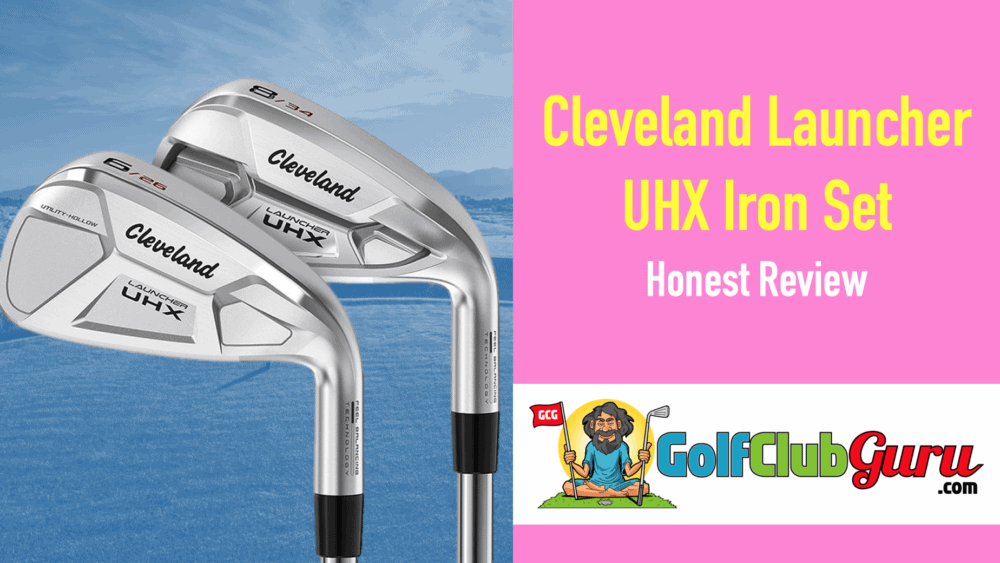 Cleveland is a golf brand that doesn’t get the credit they deserve. They are continually producing high-quality clubs but not getting much recognition for them. Cleveland is best known for their wedges, but this Cleveland Launcher UHX ladies iron set is certainly worth considering if you are in the market for some new irons this year. We will give you the rundown on what makes these irons great and an alternative option if this set is a bit more than you would like to spend.

These Cleveland Launcher UHX womens irons are a completely hollow and cavity back construction. The fact that they are hollow makes them easier to swing faster, but these irons still have some great feel. The face is made with a variable high strength steel allowing the ball to jump off when hit correctly. This is genuinely a progressive set of irons, more so than any other iron set for women on the market at the moment.

The Sand Wedge of this iron set is going to look like a traditional sand wedge. As you move up the set and get closer to the six and five iron, you are going to be looking at something that has more of a hybrid design to it. This is our favorite feature of the Cleveland Launcher UHX Women’s golf set. Where you need forgiveness and help the most, Cleveland steps in and is there for you.

What Makes These Irons Stand Out?

The Cleveland Launcher UHX women’s irons feature the V-Shaped sole that is becoming ever popular in the golf world. The V Shape will help to improve turf interaction and allow for better transfer of speed from the club to the golf ball. All golf manufacturers need to complete for ball speed at this stage in the game. Every year the numbers seem to get higher and higher, and golfers have to do less and less to hit the ball far. This is great, but we do believe at some point it will level off.

Who Are These For?

Most of the women’s iron sets are for the mid to high handicap golfer. Very few companies will target the low handicap woman player because there just aren’t that many of them. These irons have a great feel and look fabulous in person. I would say that if you were a low handicapper, you could absolutely play with these clubs as long as you have a good shaft for your swing. We recommend you get fit by a professional if you are about to shell out good money for clubs.

The stock shaft is a Miyazaki 40 gram graphite, which is most likely going to be a bit light for the faster swinging players. However, this is a great golf shaft explicitly made for these irons.

This is the point in our reviews where we usually start telling you what is wrong with the Cleveland Launcher UHX irons. Obviously, pricing is a concern on any new golf set, but we do feel as though these sets give you a tremendous value. This Cleveland set of irons will be in your golf bag for a long time. The technology is new, they are built well, and they have a classic look and feel to them to keep you lowering your handicap for years to come. If, however, they are more expensive than you would, we do have an alternative for you.

Our Better Value Recommendation Under $400

If you are looking for slightly less expensive option with similar performance, consider the Cobra King F9 Speedback womens irons. Although these clubs are going to have a bit more of a modern design than the traditional (gimmicky) look of the Cleveland Launcher UHX, they are very high performing. There are some great deals on the used options of the Cobra F9 Speedback womens irons, and they are worth looking into. The F9 Speedback irons are built for the mid to high handicap golfer and are usually sold in the 5-GW setup. You truly can’t go wrong with either set here.

Yes or No to the Cleveland UHX?

The Cleveland Launcher UHX irons are a complete yes for us. Although they have a new iron price point, they are a perfect set of progressive irons for the female player. If you struggle with distance, forgiveness, and especially stopping the ball on a green where you want to, the UHX could be an excellent fit for you. The pricing will likely come down on these clubs throughout the season, but Cleveland is known to be more reasonable when it comes to the pricing on their golf clubs.