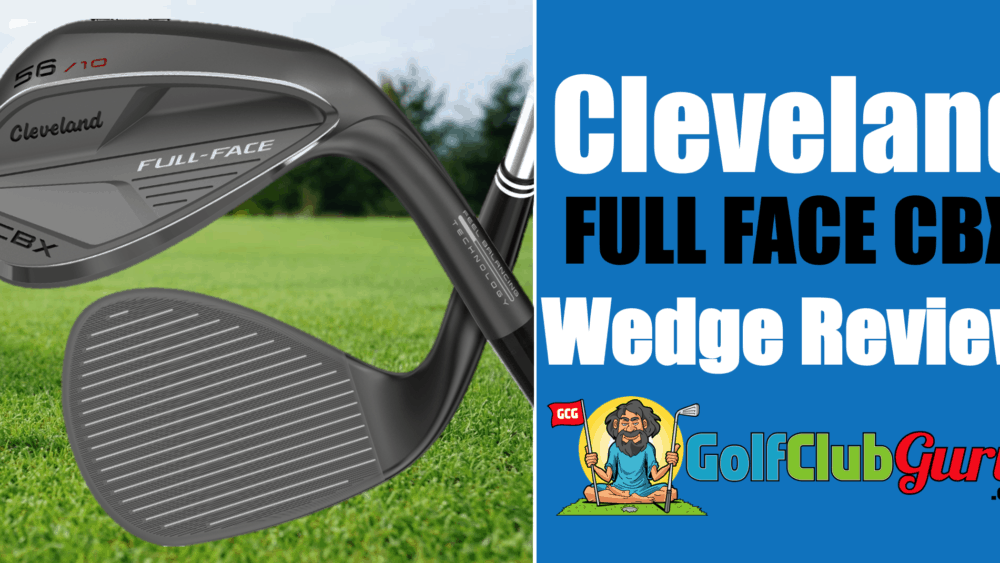 Cleveland has been able to create a real name for itself in the world of wedges for some time now, and this is for a number of reasons. In my opinion, they make the highest quality wedges when you consider durability, spin, price, and forgiveness.

So, when you discover that they now have a new Cleveland CBX Full Face wedge out on the market, it makes sense to see what’s going on and whether or not this particular model meets the standards you expect from this brand.

To be perfectly honest with you, Cleveland didn’t make the nicest looking club in the CBX Full Face wedge. However, they are seriously functional and practical, so looks don’t have to be everything. In this instance, the wedge is quite unique in how it looks, as most simply aren’t used to the full faced groove design.

Oh, and the toe part is higher than you may expect and this does give it a larger, more bulky feel to the entire thing. TaylorMade and Callaway have made Hi-Toe wedges in the past, but this is the FIRST TIME that Cleveland has done the same.  Also, the grooves do cover the entire face of the club, but we will get into why that’s important when we look at its performance.

This club is more so about performance, not appearance. No one should care what the club looks like as long as it performs well.

The Cleveland CBX Full Face wedge is all about versatility. The versatility of this club is unbelievable. If you want to hit fully-open face lob shots, low trajectory spinners, and <100 yard full shots, all with added forgiveness, this is a great option.

Also, with the grooves covering the full face, it does mean you can still produce a more impressive shot no matter where you hit the ball on the club face. However, the forgiveness aspect is further enhanced by the fact they have included a cavity back more towards the heel of the club.

The idea here is that most golfers are going to hit the ball in this area, so they have made the heart of the sweet spot here even though the grooves still offer the same sense of control all over the face. Basically, the face itself becomes a sweet spot which is pretty cool.Those are huge bonuses when hitting out of thick rough.

The first thing to mention is that this wedge performs exceptionally well, but then that’s not a shock to anybody with previous experience with Cleveland wedges.

More About The Full Face Grooves

We know we are continuing to go on and on about the grooves, but let’s explain more why they are so good.

The precision with which they have been cut, as well as the depth and angle, tied in with the fact that they cover even the entire toe of the club head allows you to really open up the club like never before. The grip and control is going to be pretty much the same no matter where you strike the ball, and then there’s the added balance that’s caused by the weight distribution. This is also helped by Cleveland working on the sole of the club which does deliver some kind of relief in both the heel and toe which, yet again, makes it easier to open up the club face and to just play around with your shots.

But here’s something people often don’t talk about with the appearance and that’s even the sound that the club makes when striking the ball. Time and time again you will see reference to this club producing a wonderful sound that does give you a sense of real satisfaction. This is further accentuated by the overall feel of the club. It comes across as sturdy, strong and reliable. All of those things adds to the confidence that you get with your upcoming shot, and that confidence is strengthened even more when you move onto the performance aspect.

I’ll try to make this as simple as possible. If you find yourself opening up your wedge face more often than not, the Cleveland CBX Full Face is a great wedge for you. When in the thick rough or deep bunker, you can open up the club face and still have plenty of grooves to work with to create more spin around the greens.

The full-face and deeper grooves does open up the size of the sweet spot while it still offers a significant amount of control at the same time. So if you find yourself hitting off the toe on a regular basis, this is a great wedge for you, too.

However, it’s best to highlight two main groups that could benefit from this wedge. First, the control aspect does mean it’s perfect for those golfers who love to get that little bit more creative around the edges of the green. The extended sweet spot and ability to add more spin to your shots does allow you to get quite fancy. The other group is for those novice or intermediary golfers. Once again, this is thanks to the size of the sweet spot, so it becomes even tougher to screw up the shot allowing you to build your confidence around the green.

Like I mentioned earlier, TaylorMade and Callaway have released full face, hi-toe wedges in the past. You would THINK that these models would be cheaper since years have passed since their release. However, that’s not the case. The Cleveland CBX Full Face wedges are currently the best priced NEW full face wedges on the market, which is kinda weird but also awesome at the same time.

As a result, the only way to save money would be to buy some slightly used wedges. I highly recommend buying like new wedges. Too much wear, and your wedge grooves simply won’t have much life left.

Even though the price for this wedge is already low, there are some other alternatives that will perform well at a fraction of the price. However, these alternatives do not have full face grooves and high toes. For us, we feel that the Cleveland CBX models are the one to look out for. Even just going back a couple of years can push the price down quite significantly, and that’s the case here. They are a great combination of spin, forgiveness, and price.

The regular (non Full Face) CBX models are still going to offer you a significant amount of control over the shots even if the weight distribution and center of gravity is slightly different compared to the newer Full Face model. However, at under $100 it’s representing real value for your money.

If you want a quality wedge, and one that’s not going to empty your pockets, then Cleveland is certainly the brand name to go for. They aren’t going to let you down, and the only other recommendation we would make is to look at the various loft angles and consider playing around with different degrees. At such low prices, it suddenly makes this possible.

The Cleveland CBX Full Face Wedge is a seriously good club to add to your set due to the amount of spin it can create while still providing you with a real sense of control over your shot. The fact that the grooves cover the full face makes a real difference in helping with those tough shots around the green, and with it being more towards the cheaper end of the market of other Full Face, Hi-Toe wedges, it’s also quite inclusive from a money perspective.

So, what do you look for in your main wedge? How do you prefer to use them? Being creative or simply wanting to get on the green? Let us know below what you think.