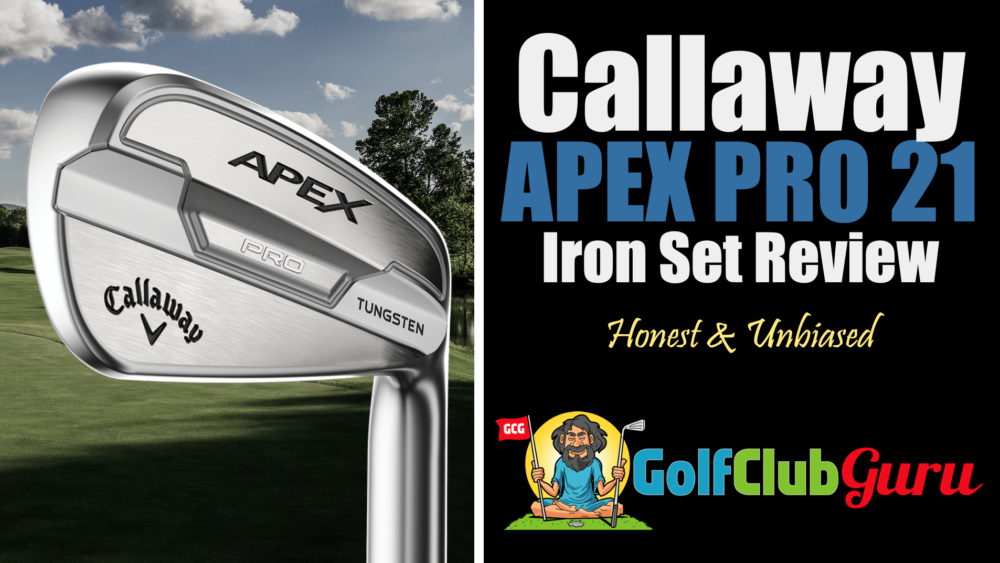 Callaway’s makes some of the best forged irons on the market. A great compromise between a set of players irons and blades is the Callaway Apex Pro 21 iron set. Callaway recommends this set for +5 to 5 handicaps, but those with higher handicaps can definitely benefit from gaming a set of irons like this, too.

Irons like the Callaway Apex Pro 21 irons shine when it comes to distance control, workability, feel, and appearance. If you can hit the center of the club face, you’ll be rewarded. However, other irons are far more forgiving on off-center strikes, which will likely keep the Pro irons out of the hands of the majority of golfers.

Appearance: It just doesn’t get any better than this.  If you like the look of a compact club head, minimal offset, and a thin topline, then you’ll fall in love with the Callaway Apex Pro 21 irons. It looks like a blade at address, but thankfully there is just a tad bit of weight low on the club head to help the overall launch and forgiveness of the club.

The club heads are just stunning, with a minimalistic design that’s common in blade-style irons. To make it short, these clubs would look great in any bag as long as you are ok with giving up forgiveness in exchange for feel & workability.

Performance: I couldn’t get enough of these clubs on the range. Each shot felt better than the last, and the muted sound was simply addicting. I hit these clubs right after I reviewed the Callaway Apex 21 irons (non-Pro version), and I noticed a small decrease in distance with the Pro irons compared to the more forgiving model. That was completely expected, as the Pro irons have much weaker lofts and simply aren’t focused on hitting the ball high and far.

It’s extremely easy to work the ball left and right with the Pro irons. In fact, a little too easy. If you want straight, high shots and to simplify the game, this isn’t the iron set for you. This IS the iron set for you if you want to be able to flight down shots on command, as well as fade/draw approach shots into the green.

Please keep in mind that my personal results with these clubs mean absolutely nothing to you. Please do yourself a favor and get professionally fitted for clubs. You can thank me later. You may think that you’ll like the Pro irons better, but you may find that you like the look and forgiveness of the larger Apex 21 irons better, or even the DCB 21 irons.

Who The Callaway Apex Pro 21 Irons Are Best For

The target audience for the Callaway Apex pro 21 irons is pretty unique actually. It’s best for golfers that want a blade style iron, but aren’t quite ready to fully commit to the Callaway Apex MB (muscleback) irons. The Apex MB irons are traditional blades with no perimeter weighting and the least forgiveness.

Hopefully that makes your decision a little easier. But, again, it’s always best to get fitted by a professional club fitter to see which one works best for you.

Compared to Other Callaway Apex Irons

Don’t think that you have to spend $1,300 to get a compact players iron with a little bit of forgiveness. The Callaway X-Forged are some of my favorite iron series of all time. You can save some serious money by going with the old X-Forged clubs. And, believe it or not, you won’t be sacrificing performance at all.

The X-Forged came out in three different years before the 2021 release: 2009, 2013, and 2018. As you can imagine, the 2009 irons are the lowest priced, while the 2018 are comparatively the highest priced. I absolutely love the 2009 version, but they can be difficult to find in great condition (which I highly recommend). So, I’d suggest starting with the 2013 model first.

That completes my Callaway Apex Pro 21 iron set review. If you have any thoughts/comments, please leave them below!