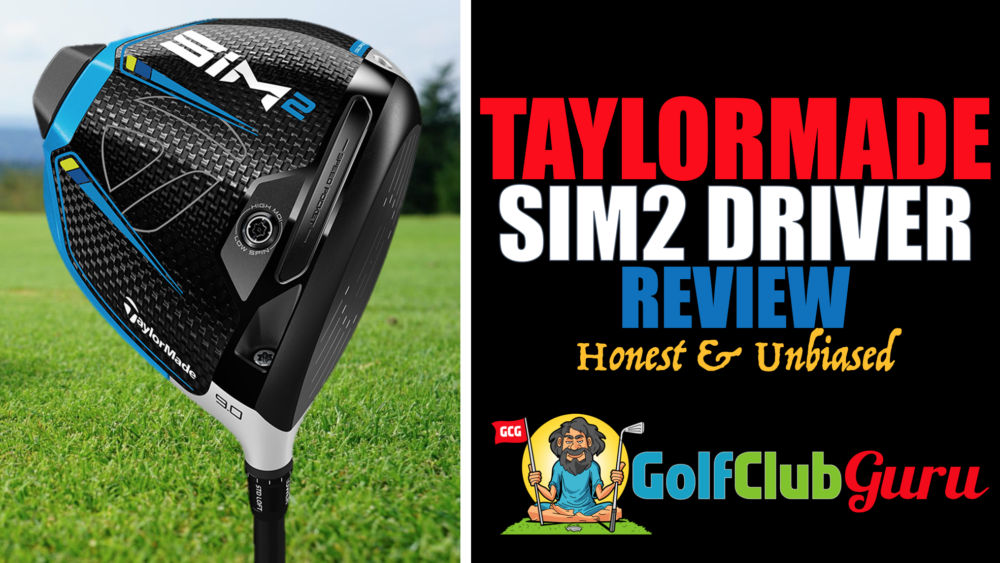 Oh, what’s that? You want an honest review? Not just a reiteration of TaylorMade’s website that uses really big words to make you think this driver is the best one ever made?

Here’s our honest, unbiased review of the basic TaylorMade SIM2 driver (NOT the MAX or the MAX-D models).

Overall, yeah I guess it’s a good looking driver. At address, the TaylorMade SIM2 driver looks practically just like the original SIM driver, but with the blue “forged ring” visible. On the sole, they added a removable weight low and back on the club head, and took out the adjustable sliding weight from the original SIM in place of another removable weight directly behind the club head.

You want to hear a bunch of BS? Listen to the “technology” that TaylorMade is trying to sell you on, all packed into one driver. Forged Ring Construction, SIM Inertia Generator, Speed Injected Twist Face, Thru-Slot Speed Pocket, Split Mass Weighting. What a load of bologna. I literally get tired of reading reviews of clubs because they just hype up these ridiculous things that sound great but really don’t mean crap. Practically all name brand drivers in the past 5 years will perform within 1-2% of each other. Let’s be real here.

I won’t be able to tell you how YOU and YOUR SWING will perform with this driver. I hope you didn’t come here expecting that. However, I will be able to make some sweeping generalizations about the TaylorMade SIM2 driver.

The SIM2 should be the least popular/common driver of the three models. The TaylorMade SIM2 driver is meant for low spin, which is something that will benefit (for the most part) low handicaps and fast swing speeds mainly. I’d highly recommend the SIM2 MAX driver to the large majority of golfers. The MAX model is more forgiving, higher launching, and will fly straighter and further for the majority of golfers. If you have a really fast swing (let’s say 100mph+), then I’d recommend trying out the MAX due to it’s low spin capabilities.

Before we move on, I want to emphasize that if you are going to be buying a $500+ driver (you freaking rich moron), then you better be spending the extra ~$100 or so to be professional fit for the best performing head, shaft, and shaft flex combination. If you are just buying the TaylorMade SIM2 off the rack, you might as well be throwing away your money or just sticking with your current driver and saving your money.

Who the TaylorMade SIM2 Driver is Best For

The TaylorMade SIM2 driver is best for rich suckers that have more money than they have cents. Actually, though, the driver is best for those with fast swing speeds that know that they create too much backspin on their drives. If you swing fast, but your drives fly far too high and spinny, then this is a great fit. However, you can also adjust your swing to generate less spin (like swinging more up on the ball and/or adjusting your posture to lean away from the target a hair at address).

Keep in mind that even if you fit the target audience (high swing speeds but spinny drives), there are still far better value options on the market. You don’t have to spend $500+ to get a high quality driver. Not even close, actually.

Compared to the Other TaylorMade SIM drivers (Max and Max-D)

Compared to the Max and Max-D models, the standard TaylorMade SIM2 driver is:

The TaylorMade SIM2 driver is obviously a great driver. However, you can get a very similar driver for $200 or less easy. Super easy.

The best value alternative to the TaylorMade SIM2 driver is, in my opinion, the TaylorMade SLDR. Super low spin, adjustable weight (even though it’s a sliding weight on the SLDR), great driver. I’d be willing to bet that the two (with the same shaft and in the same settings and hitting the center of the club face) would perform within 1-2% of each other when it comes to distance, forgiveness, and spin rates. Oh, and you can get a TaylorMade SLDR driver in nearly pristine condition for around $150. In decent condition, you can fetch one for closer to $100, which is crazy good value.

I truly hope that you’ve enjoyed my unbiased TaylorMade SIM2 driver review. If you have and comments/questions, please leave them below.