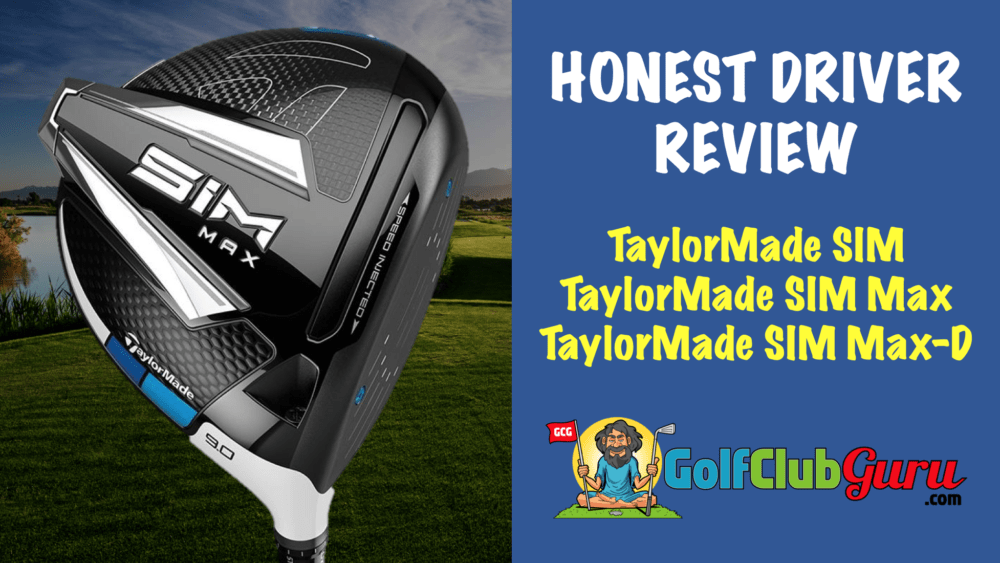 Listen: we don’t beat around the bush here. The TaylorMade SIM drivers are AWESOME… but they are not worth the price by any means. Unless you truly just don’t care about the price and simply want the best of the best. However, if any part of you is put off by the price, you should consider better value drivers that were released 2-5 years ago.

Regardless of our opinion on the unjustifiable price, we’ll still talk about each new TaylorMade SIM driver release. Again, we will be unbiased and tell you our honest opinion.

Comparison of the Three SIM Models

Best for: distance and adjustability

If you are someone that likes tinkering with their driver, the standard TaylorMade SIM is probably the one for you. The sliding weight allows you to give your driver a draw-bias or a fade-bias. It won’t fix your swing flaws by any means, but can be used in combination with your swing improvements to get the ball flight you are looking for.

TaylorMade touts their new aerodynamic design, “Speed Injected Twist Face,” and “Inertia Generator.” However, we choose to ignore ridiculous gimmicks. They are obvious sales tactics to make you think the SIM drivers are better than the previous models that TaylorMade released. It’s a good driver… but no better than the M5, which is now at a much more reasonable price after being on the market for a couple of years.

Pros: extremely long when paired with a good shaft for your swing, decently forgiving, adjustable

Cons: $50 more than the Max and Max D, ridiculous price for the next year or so, smaller club face & sweet spot

Best for: mix of distance and forgiveness

If you are looking for something a little more forgiving, consider demoing the TaylorMade SIM Max driver. It’s got a larger club face and sweet spot than the standard SIM. It’s actually just a taller club face, which adds a little bit of margin of error on your drives. That alone should appeal to the majority of golfers, who struggle to consistently hit the center of the club face throughout an entire round. It also decreases the risk of hitting sky balls and damaging your driver.

Compared to the SIM model, this one is more forgiving and equally as long on average. The major difference is that this driver isn’t adjustable and it’s got a slightly larger sweet spot.

Pros: great mix of distance and forgiveness that appeals to a wide range of golfers; $50 cheaper than the adjustable SIM

If you want the most forgiving driver on the market for 2020, the TaylorMade SIM Max D is a great option (another great option is the Callaway Mavrik Max). It’s got a huge club face, taller than any club face that TaylorMade has released in the past. That means that missing the center of the club face by 1/2 to 1 inch up or down won’t result in a terrible shot like it might with other drivers. Plus, you are far less likely to leave sky marks on this driver, unless you tee the ball way too high or have a very steep angle of attack with your driver.

Another huge benfit of the SIM Max D is the heel weighting, which results in a driver that is biased to avoid slices. The weight in the heel requires less hand action to close club face at impact. That results in better odds of straight shots and draws, especially for those that have trouble missing right (for right handers) and slicing. It’s worth noting, however, that you could also duplicate this effect by simply putting lead tape on the heel of your drivers.

Pros: one of (if not THE) most forgiving drivers on the market; huge club face & sweet spot; draw bias for those that leave the club face open, like slicers

Cons: Too bulky for some golfers; still heavily overpriced