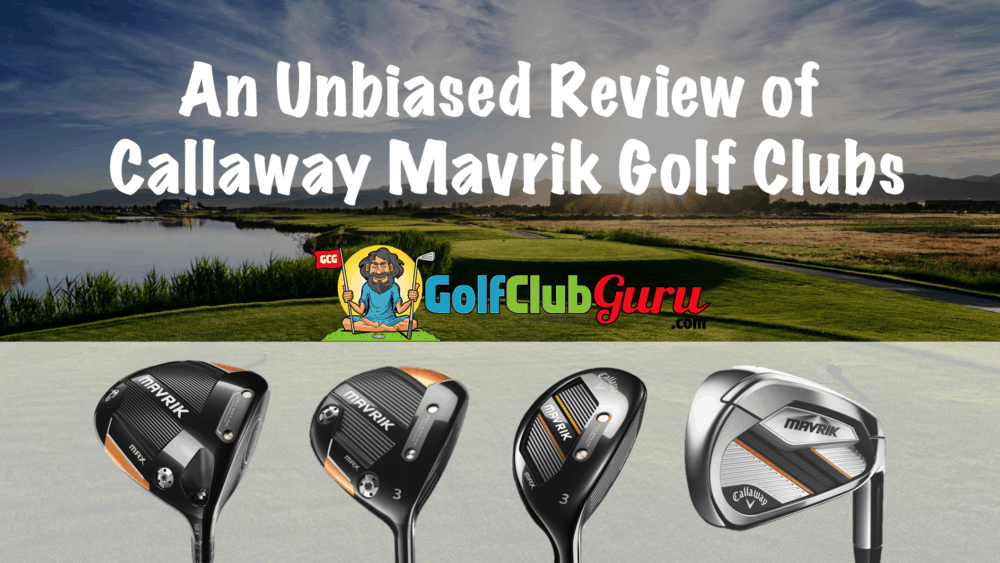 Overpriced and practically the same as previous Callaway clubs, with one important difference… the paint job. This honest review is over.

Thanks for reading and please come back next week for an honest review of the TaylorMade M184 clubs. Spoiler alert: they are also overpriced and the same as previous models but with a HUGE design change regarding the color scheme of the paint.

Nah, just kidding. We can talk about the Callaway Mavrik clubs a little. Let’s begin.

As a genius marketing scheme to sell more drivers, Callaway has continued the trend of offering three different driver models at a time to convince people that one will actually make them better than the others: the standard Mavrik, the Mavrik Sub Zero, and the Mavrik Max.

To keep it simple, one’s for good golfers (Sub Zero), one’s for crap golfers (standard Mavrik), and one’s for golfers that truly couldn’t be worse if they tried (Mavrik Max). A little generalistic, but not much.

Here at golfclubguru, we hate getting technical. We’ll leave the gimmicky mumbo jumbo for the club manufacturers website. We like to keep it real here. Let’s break down the three drivers.

Oh, you think you are too good for a standard driver? That’s a ballsy move my friend. You sure you don’t need some extra forgiveness on those 4-5 mishits per round? You sure you wouldn’t benefit from the higher launch angle of a lower center of gravity drivers?

The Callaway Mavrik Sub Zero driver is all about low spin for higher swing speeds. Drivers can get a little spinny for fast swinging golfers, which takes away from the total distance that they can drive the ball. However, it’s worth noting that the club head is just one of MANY factors that impact spin. Other factors include your swing (specifically your angle of attach), swing speed, your shaft, and your golf ball. We’d recommend a simple professional fitting if you plan on taking golf seriously in any sense of the term.

The salesman over at Callaway also praise the high MOI (moment of inertia) design of the driver, which is rare in a club head that’s marketed as “low spin”. We don’t buy into the high MOI very much, as that term is far overused. In simple terms, it’s just the amount of energy needed to rotate the club face on an off center hit. A “high” MOI design will require lots of energy to twist the club face. However, this driver is really meant for fast, low handicap golfers that shouldn’t miss the club face often anyway, if at all.

Personally, unless you have been fitted specifically for the Mavrik Sub Zero and a good shaft combination, you probably shouldn’t be getting the Sub Zero driver.

If the sub-zero seems too good for you, but your ego might drop with the “Max” driver, the standard Mavrik driver might be a good fit for you. Honestly, it’s just a driver focused on distance and some forgiveness. It’s lighter than the Max, which will help with distanced, but it’s not as large of a club head as the Max, so it’s a tad bit less forgiving.

Although this will probably be the most popular Mavrik model sold in 2020, you should probably consider the Max unless you consistently hit a majority of fairways. Will it hurt your ego a little? Maybe, but that sounds like a personal problem. I’ll tell you WITH CERTAINTY that a more forgiving driver will improve your game more than a driver that might increase your average drive by .5 yards.

Dang, you must really suck at golf if you are looking at the Max model, right? WRONG. Leave your ego at the door and let’s focus on hitting fairways, hitting greens, and not three putting 10 holes each round.

Step one will be a lot easier if you have the most forgiving driver on the market for 2020. The Max has a slightly larger club face and sweet spot. That alone will help the majority of golfers that simply struggle to hit the center of the club face consistently.

The Callaway Mavrik Max is also a good choice if you’re struggling with slicing, as it has a removable weight near the heel of the club. You simply add weight to the heel – this will require less hand action to close the fact at impact. We NEVER recommend buying a club to fix a swing problem, but we’re aware that lots of golfers do it. Plus, it can help you along the way during your swing fix.

Did you even read what we wrote about drivers? This is practically going to be the exact same thing, just paraphrased as to not sound TOO redundant. Oh and we also like to throw in a completely random sentence in some of our articles to keep you awake: the red elephant pulls up to the grocery store, and the attendent puts all of his food in his trunk. Let’s carry on.

Mavrik Sub Zero Fairway Wood: Just like with the driver, the sub zero has a smaller profile head and is best for fast swing speeds that generate a lot of spin. It’s got interchangeable weights on the sole of the club, which allows you to adjust launch and spin rate.

Standard Mavrik Fairway Wood: Meant for distance. A little forgiving, but not as much as the Max. If you are the kind of golfer that brags when they fly the green by 10 yards, this club is probably for you.

Mavrik Max Fairway Wood: The most forgiving fairway wood of 2020. If you aren’t comfortable with your ability to hit the center of the club face on a consistent basis, this is the one you should go with. Again, drop your ego and focus on getting clubs that will actually improve your scores, and therefore lead to more fun.

Hybrids are great clubs to have in the bag. Easier to hit than long irons. Easier to get the ball higher in the air, hopefully to land softly on the green. Not as fun to hit as long irons, but maybe that’s just me.

If you really hate money and want to shell out $250 for a single hybrid, by all means check out the three different options of Mavrik Hybrids. If you kinda like money (but still want an awesome hybrid), I’d recommend checking out some hybrids that are 2-5 years old in like new condition for a fraction of the price.

We find that people really enjoy pictures more than reading, so just see the above picture if you want a quick comparison of the three different models.

Before you potentially drop $1,000 on a new set of irons, you should probably be sure that you are getting the best set for you. To do that, you should probably spend a couple of hundred bucks and get a professional fitting done. If you are willing to spend this much money on clubs, you BETTER be willing to spend a fraction of that on the actual fitting itself, to determine the best shaft & club head combos for YOUR swing.

Until then, we’ll give it our best shot to help you pick the best set for you.

The Callaway Mavrik Pro is a players iron. It’s got a thinner profile and is meant for better control as opposed to more distance/forgiveness. Center strikes will be rewarded with incredible distance control, while off center strikes will be punished with bad feel and a terrible result. If you aren’t confident that you can hit the center of the face more often than not, this isn’t the set for you. It’s much easier to work the ball compared to game improvement irons.

The standard Callaway Mavrik iron is a game improvement iron focused on distance. Are you all about distance? You’ll probably want this set. It’s very forgiving compared to the Pro set, but less forgiving than the Max set.

Sure, it has all of the gimmicky featured of the other Mavrik irons, like the club face made with artificial intellgence. No one cares about that they. They just want to know about how many yards they are going to gain from their previous irons. To really tell, I’d recommend getting on a launch monitor somewhere (at your local club fitter or at a large golf equipment store. Make SURE that you bring your old irons to compare to the Mavrik irons. Why? Because many (actually most) launch monitors boost their numbers to make you really excited and want the buy the clubs instantly without considering other, more budget-friendly options.

ANY high handicap golfer, or any golfer that considers themselves a poor ball striker, should be looking at the Callaway Mavrik Max irons. The Max set is a super game improvement set with a focus on being the most forgiving club on the market. That means thick toplines, low center of gravity, wide soles, and lots of perimeter weighting.