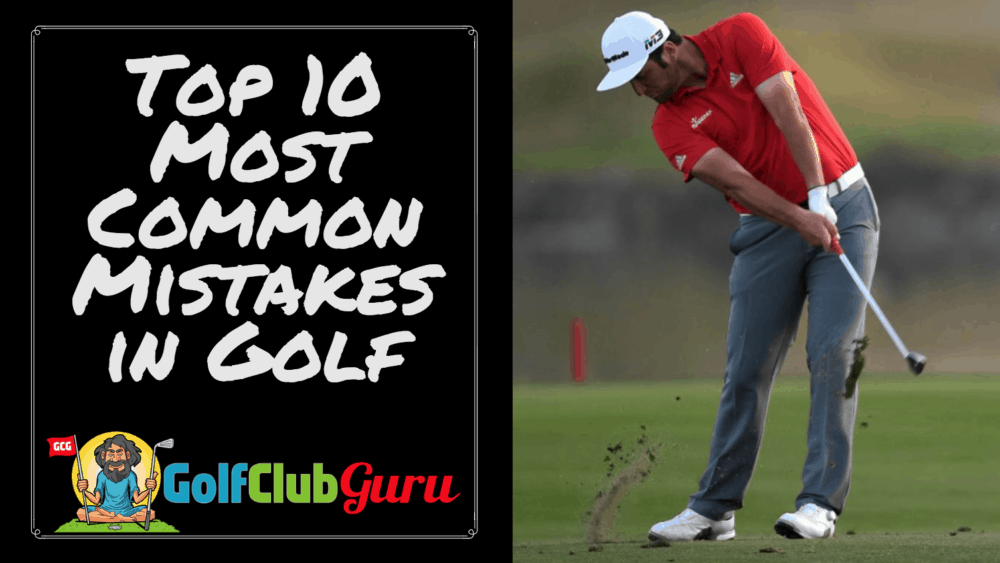 The 10 Most Common Mistakes in Golf

Here are the top 10 most common mistakes in golf. Hopefully you will read through all of them and catch yourself making these mistakes before it is too late. I can honestly say that I have committed all of these mistakes throughout my career in golf, and I thoroughly wish I had something like this to read beforehand.

In my opinion, the most common mistake in golf is letting your ego get in the way when it comes to how far you truly hit the golf ball. Think for a second about how far you hit your 7 iron. What number comes to mind? 160? Is that the average 7 iron you hit? Or is that an absolute perfect 7 iron? Are you often a bit short from 160 even when you hit it just how you wanted to? Adjust that number you originally thought of, and even keep track of your yardages by writing them down if you need to. I think taking 30 minutes (preferably on an open course so that you won’t bother anyone) on a calm day to truly determine how far you hit the ball is imperative. Use a rangefinder, use the 150 yard markers, use whatever you want. Hit a lot of balls, take the true average, and that is what you should be using for that club’s yardage.

When I first started playing golf, I remember feeling oddly pressured to try to hit the same clubs as my friend, who was a GREAT ball striker and much longer than me. Don’t me like me. Hit the club that will get you to your target ON AVERAGE, not when you hit it absolutely perfect. If you are relying on yourself hitting it 100%, you are likely to be short nearly every shot. Plus, your friends will be more impressed with lower scores, not how far you hit your 8 iron.

One thing that separates a “meh” golfer and a great golfer is how well they know their distances. A good golfer will know exactly what club he needs to get the ball 160 yards, and that is not by hitting a 9 iron as hard as humanly possible (like I used to try to do).

2) Forgetting about the fundamentals

Once the fundamentals are forgotten about, you can say goodbye to any sort of consistency in your golf swing. From personal experience, I’ve had about 10 very different golf grips in the past 5 years. Had I simply committed to a solid grip earlier, I would have saved myself a lot of time and stress. I’ve also had a terrible habit of always aiming far too right of my target, which has also caused a lot of other bad habits to creep into my swing.

It will take a lot of willpower, but I challenge you to do this: think about “PGA” before each time you play: Posture, Grip, Alignment.

I’d recommend you check out #5, get a lesson with a PGA pro, and start working on how you can better improve your fundamentals ASAP.

I see it all the time, and it physically hurts me. Someone will buy some really cheap clubs, typically a low quality complete set. The clubs will break one by one after a few months. Then they have to cut their losses and buy a higher quality set. That means that they essentially wasted their money on their first set, as they could have gone straight to the higher quality clubs to begin with.

It doesn’t cost much money to buy good clubs, so you might as well shell out the money upfront and skip the step of buying crap quality clubs. Check out my articles here on the best budget golf clubs that you can buy.

4) Swinging over the top

When it comes to the golf swing itself, swinging over the top is by far the most common mistake that people make. It’s very easy to do, as a golf swing on the perfect plane doesn’t come naturally to most golfers.

Swinging over the top is simply taking the club back too flat and then having a downswing that is too steep (upright). It’s usually caused by wanting to “hit” the ball as soon as someone gets to the top of their swing. They take the quickest path to the ball, which is over the top, as opposed to letting the club and the hands drop first. When a golfer comes into the ball with a steep downswing, they often times hit slices, pulls (to the left for a right hander), and have huge divots. A good sign that you are making this common mistake is that your divots will be pointing way left (for right handers) of the target.

It’s something that nearly every golfer experiences at some time or another. The best way to fix it is to exaggerate the complete opposite: making the backswing very steep and then trying to make the downswing as flat as possible.

Check out this more in-depth article if you think you might be coming over the top.

5) Not getting golf lessons

All golfers should have a swing coach so that they can learn the fundamentals of the game. You don’t have to take a ton of lessons, but a couple can make a huge difference.

Here’s a more in-depth article about how to find the best PGA instructor for you.

6) Not hitting up on your driver

Besides coming over the top, another very common mistake when it comes to the golf swing is not hitting up on the ball enough with a driver. Drivers perform the best when the ball is hit on the upswing, as opposed to hit with a driver that is still going in a downward direction.

A great trick to fix this common mistake is to put something (i.e. a tee or a towel) 6 inches in front of your golf ball. This will encourage you to miss the tee/towel by hitting up on the ball instead of hitting it with a downward strike.

7) Not hitting down on your irons

Many golfers don’t get into a very solid impact position with irons. They might hit the ground before the ball, or they simply don’t take a divot after they hit the ball. With no divot, you likely aren’t getting the most out of your distance or control. The best drill to to put a towel or a tee directly behind the ball, requiring you to miss the tee/towel, hit the ball, and THEN hit the ground.

Hitting down on your irons (without coming over the top) is a very hard concept to understand. I would recommend you check out #5 again and book a lesson ASAP if you haven’t already.

8) Being too impatient with results

Golf is had. Progress is not linear. You are going to get noticeably better for a period of time. And then you are going to find yourself in a rut. You are no exception, trust me. You will experience the tough times too.

My best advice for you: be patient. Don’t expect to drop strokes off your game every month. It’s not realistic. Try to get better at some aspect of you game (ball striking, short game, putting) every single day. Don’t be discouraged if you go through some tough stretches. Keep pushing through and keep improving in some way… every single day!

It’s so easy to get into a habit of going to the range, playing a round, and then leaving. What about the short game though? Add dedicated practice time for practicing wedge shots, chips, pitches, and putting. Do it before rounds and even after rounds too if you have time.

Why should you practice your short game more?

10) Not using any sort of strategy

This is a very common mistake among golfers. Too many people try to simply hit the ball as far as they can as opposed to playing “smart”.

For example, imagine a 520 yard par five. Odds are, you won’t be able to reach the green in two shots. Most amateurs will take driver (let’s say 250 yards) and then three wood (let’s say 225 yards), regardless of how tight the hole is. So now they have 45 yards left; a distance that many golfers struggle with. Plus, it’s very probably that their three wood shot was errant, causing them to have to punch out or drop and add a penalty stroke.

A better strategy would have been to hit a layup shot to a spot where the fairway is the widest. A good layup shot would have also been to a distance that you prefer. For example, if you really like 120 yard shots, you can hit your second shot to hopefully land right around that spot. So that would have been a 250 yard drive, then a 150 yard 7 iron (instead of the three wood), then a nice 120 yard wedge or 9 iron.

This example can be used for all par 4’s as well. Don’t just hit driver on every hole. Hit the club that will hit the ball to the widest part of the fairway, or aim for a shot that will leave you with a comfortable distance to the flag.