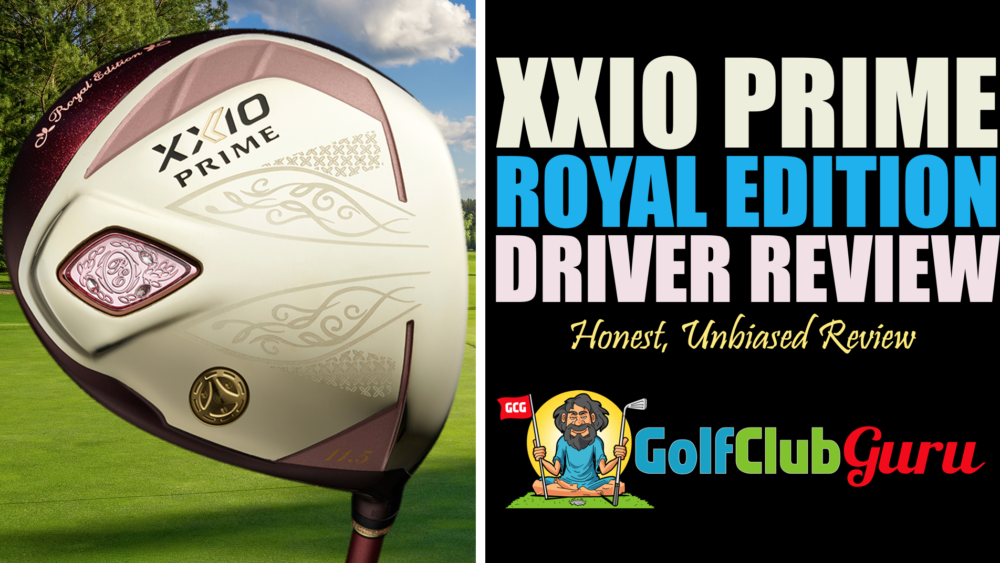 XXIO just released a new line of golf clubs for women called the XXIO Prime Royal Edition. They have released the Royal Edition clubs in the past, so we’ll refer to this release as the “Prime 11 Royal Edition”.

This review will go over the driver specifically. We’ll talk about appearance/performance, pros/cons, who it’s best for, and even offer a better value alternative to save you some money.

In case you have never hear about XXIO, let’s talk a little about the brand first. XXIO is known for making the lightest weight clubs on the market. Who benefits from lightweight clubs? Typically seniors, who are able to generate more club head speed without losing much accuracy & consistency.

The appearance of the XXIO Prime 11 Royal Edition driver is hit or miss. Some ladies may love the design – others may absolutely hate it. Personally, I’m not a huge fan but a driver’s appearance doesn’t mean much to me anyway. If you are a fan of rose gold, then you’ll probably fall in love with the design. My wife is obsessed with rose gold (her wedding ring is rose gold), so this would be a great fit to her eyes.

The weight of the entire club (grip, shaft, and club head combined) is just 245g. Compare that to the average weight of a women’s driver (roughly 320g) and you’ll see why this driver performs so well for senior women and women that don’t generate much club head speed.

The XXIO Prime 11 Royal Edition driver will be one of the lightest drivers that you’ll ever find. Their previous models were a little bit lighter (a couple of grams), but the added forgiveness of the Prime 11 driver is well worth the small extra weight.

Keep in mind that the XXIO Prime 11 Royal edition driver will be a great fit for ALL women golfers that swing slowly (not just seniors). If you lack flexibility, athletic ability, or can’t swing fast for other reasons, then you’ll hit the ball much further with a light driver like the Prime 11. Light club = faster swing speed = faster ball speed = longer drives.

On top of the added distance, the XXIO Prime 11 Royal Edition driver is super forgiving on off center hits. If you struggle with hitting the center of the club face consistently (don’t we all?), then you’ll greatly benefit from the more forgiving club face.

Who the XXIO Prime 11 Royal Edition Driver is Meant For

The XXIO Prime 11 Royal Edition Driver is best for slow swinging women that want a lightweight, forgiving, draw biased club head. Senior women will be the most common consumer of this driver for obvious reasons. However, you don’t have to be a senior women to benefit from a lighter club head. If you find yourself getting tired at the end of a round due to heavy clubs, then this will be a great option for you.

However, not everyone can afford this driver. The majority of golfers won’t, in fact. Therefore, this driver is really meant for women that don’t care how much a driver costs. They just want a super lightweight club that will help them hit the ball further and straighter. If that sounds like you, go ahead and get the XXIO Prime 11 Royal Edition Driver.

If you like to save money when you can, then you wouldn’t dare spend $1,200 on a driver. Heck, my entire set of premium name brand clubs cost me like $400 total. For people like me, I recommend a better value, lower priced driver below that will perform pretty similarly.

Cobra has been the king (I mean queen!) for years for lightweight women’s drivers that launch the ball far and straight. Their Superlite model is extremely popular for slow swinging women golfers. While it’s not quite as lightweight as the XXIO Prime Royal Edition driver, it’s pretty dang close. The Cobra F-Max Superlite women’s driver weights just 287g, still far below the average. Although it’s a little heavier, the club face is much better for forgiveness and ball speed.

The Cobra Superlite and XXIO Royal Edition drivers are both: lightweight, forgiving, and draw biased. The main difference is that the Superlite has an offset hosel for an additional draw bias, which most women would benefit from.

Oh, and the Cobra F-Max Superlite driver will only cost around $150 with free shipping. I’d say a fair amount of difference in price between the two – don’t you think?