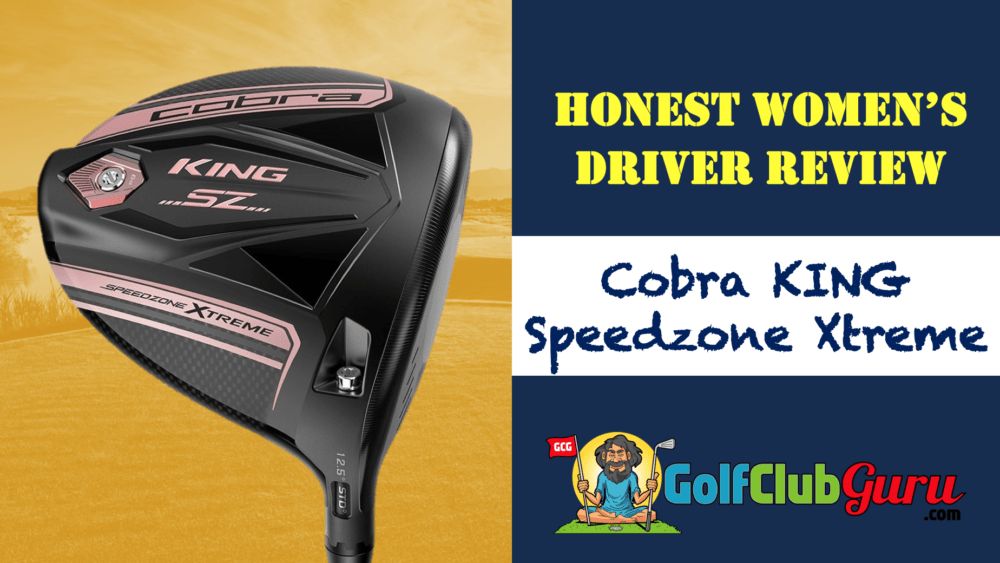 Cobra does a great job producing high quality forgiving golf clubs for women. The Cobra Speedzone Xtreme Driver is their newest release, and it is packed full of performance. The F9 Speedback series released last year hit the market strong, and this year Cobra came back and announced the release of the Xtreme Driver for women and three Speedzone Drivers for men as well. They learned a lot from the F9 series and brought back the best technology.

So is this Speedzone XTreme Driver for you? Is it worth the money? You know we will give you our honest opinion.

The Cobra King Ladies Speedzone XTreme Driver features a UST Helium shaft. These are some of the lightest shafts on the market, helping you to get even more ball speed from this club. If you are a very fast swinging women player, you may want to look into a different shaft in this club. Since this is a new release, there are some other custom shaft options available, and some are free of charge.

One of the reasons that the F9 did so well was because of how adjustable it was. The Speedzone Xtreme is also a very adjustable driver. When it comes to spending a lot of money on a new Driver, adjustability is essential. Having an adjustable driver is like getting more than one driver for the price.

Not only can you change the loft in the Speedzone, but there are two interchangeable weights to get the launch conditions working precisely for you. We have said it before, and we will continue to stress, adjustability makes it feel like you have a custom club built for you at the start of every round.

Our favorite feature of the Speedzone Xtreme Driver is the Cobra Connect technology. The ability to download an app on your phone and track the distance you hit your golf ball is revolutionary. We love that you can change the loft to 14, check out results and go back to an 11 and see what provides the best results.

Cobra is overall quite fair when it comes to pricing. Even with this new driver release, they are still quite a bit lower than the TaylorMade and Callaway new releases. There is no question that this is still a costly driver, but it is nice to get the technology, and the Cobra connect as well.

The most obvious alternative for the Speedzone XTreme is the Cobra F9 ladies driver. It is also an adjustable option, has the aerodynamic speedback shaping, and has a very low center of gravity. This was one of the best drivers that Cobra ever put out, and it now retails for about half the price of the Spedzone Xtreme Driver.

There is one more option we have for you if you want to go back even a year further in technology. The Cobra F8 was a great driver, not entirely as adjustable and not as long, but it still has the Cobra Connect. This club would most likely be found used at this point, but you will find that the F8 Ladies Cobra Driver was perhaps their most forgiving release ever. It may be a bit more forgiving than the Speedzone, but certainly not as long.

Yes or No to the Cobra King Speedzone?

If you have the budget to spend, the Speedzone Xtreme driver is a terrific choice. Cobra thought of everything with this club, and if you are in search of ball speed, distance, forgiveness, and feel you can have it all with the Speedzone driver. If the price is an issue for you, there is a minimal difference in performance from the F9 to the Speedzone.