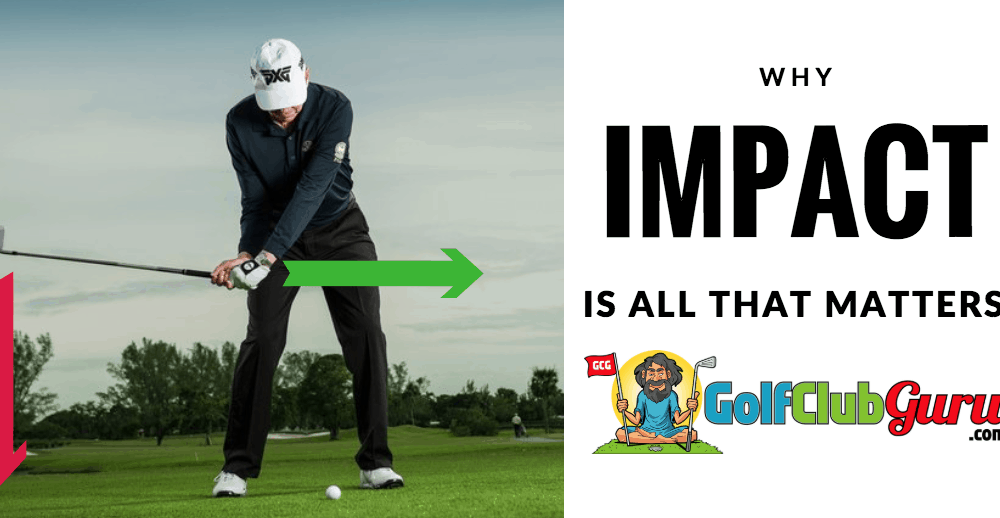 Why Impact is All That Matters in the Golf Swing

The golf swing can get complicated. All we are trying to do is hit a ball from Point A to Point B in as few attempts as possible.

When someone tells you to throw a ball to them, do you think about the plane of your shoulder turn going back or the position of your elbow as you are about to release the ball?

No, you just care about releasing the ball in the right direction with the correct speed, and without putting too much weird spin on it.

I think we could all make our swings a little less complex, and a little more intuitive, like throwing a ball.

The golf ball has no idea whether you are laid off or across the line at the top. It has no idea if your shoulder turn is too steep or too flat. That flailing trail elbow that you have been trying so hard to fix? Yeah, the ball has no clue about it when it is struck.

The only thing the ball knows when it’s being hit is where your club face is pointing, the path that you come into the ball, and how hard it is being hit.

A Golf Shot Can Be Like a Baseball Throw

Let’s go back to the example of throwing a ball, which is also just making a ball go from Point A to Point B in the easiest path. When thrown, the ball only knows which way it is being thrown, if any spin is on the ball, and how hard it is being thrown.

You can have the funkiest wind up the world has ever seen, but if you adjust and throw the ball in the right direction, with no spin, and throw it hard, the baseball will fly long and straight.

No one tells the golf ball if your swing looks pretty or not. And, if someone does tell the ball this, I would try to let that person slowly fade out of your life, because they sound ridiculous.

The only purpose of having good swing mechanics should be to make contact with the ball with a better strike and on a more consistent basis.  In other words, the purpose of any swing change is to make a better impact a larger majority of the time. If a swing fix will not do that, you do not need to implement said swing fix, as it will be a waste of time and energy.

The One Common Thing in Every Pro’s Swing

If you want to hit the ball like a pro golfer, you need to do what they do. What do they  all do? Have a perfect position at the top of the backswing? Heck no, not most of them. Have a one piece takeaway that stays perfectly on plane? Definitely not for a lot of pro golfers. Have a good impact position? Yep. Every single one of them. No exceptions.

Note! Impact position entails the following: whether you are hitting down on the ball or trying to scoop it, where the hands are at impact, the consistent path that the club takes (in-to-out, out-to-in, in-to-in) as well as how open your hips are to the target.

If you look at every swing that the PGA tour has seen, everyone of them ends up in a position where they are hitting down on the ball (with irons or wedges) and compressing the ball by having their hands leading and the clubhead trailing. All of them have a consistent path that they hit the ball with (most coming from the inside of the ball, with a few that come more from the outside to hit fades typically).

So, no, I don’t care if your backswing is too long like John Daly, or if you lay the club off significantly like John Rahm, or if you lift the club up too much in your backswing like Kenny Perry. If you can still come into the ball on a good plane, with a good path, and come into a good impact position, then you are on the right path.

Imagine if Jim Furyk decided to stop listening to his dad and went to a new coach 15 years ago. Imagine if the new guy looked at his swing, saw how great his impact position was, but then decided that they should make significant changes, even though his ball striking was consistent and reliable.

You may be thinking, “Hell, of course his golf swing is reliable. He is on the PGA tour! Me, on the other hand…I’m a hacker and a terrible ball striker”

As demeaning as that may be, let me make myself clear: If you are not a good ball striker, I DO NOT want you to stop trying to improve your swing mechanics. I don’t want you to only work on a good impact position.

However, I DO encourage you to focus on what swing change you can make that will have the greatest impact on your impact position. For most, this means working on their transition to shallow the club. For others, that means incorporating a steeper backswing to be able to shallow the plane in the downswing. For a few, that means learning to hold the lag and simply working on getting into a better transition by training and repetition.

The Role of the Backswing

I’m a big believer in saying things in multiple ways. One way of saying it might make no sense to you. But by saying it a little differently, something might click and end up making a huge impact on the progression of your golf swing.

If you are still struggling with the idea of working on your backswing less, let me try to help you out. Think of the backswing as a means to an end. You have to make a backswing, only because you want to be able to make a good downswing. So, that means that the backswing is only there to allow for the downswing to occur.

If your takeaway is way inside and then you lay the club off significantly, but then naturally you come into the ball with a great path and with great consistency, then your backswing is FINE!

The backswing completed it’s goal: it allowed you to make a great downswing. Now, instead of working on laying the club off less, focus more on making a better impact position.

Find a Pro With Your Tendencies – How Do They Get into Impact?

I encourage you to look to the PGA Tour for a golf swing that has similar “flaws” or “imperfections” or “unique moves” in the backswing as yours.

For example, if your golf swing….

In my opinion, the impact position is not trained enough. There are not enough reps of trying to swing solely to get into a better impact position. Why is this? Because too many people are focused on having one of the “picture perfect swings” that they see on TV.

My best advice when it comes to training the impact position is this:

Swing Thoughts and Feelings to Get Into a Good Impact Position

Here is a pretty long list of potential swing thoughts that might make sense to you. I’d advise you to pick one that sticks out to you and try it for multiple range sessions. If you feel as if it is helping you reach a better impact position, great! Keep working with it. Otherwise, try a new one (if you refuse to go get a PGA Pro golf lesson, that is!).