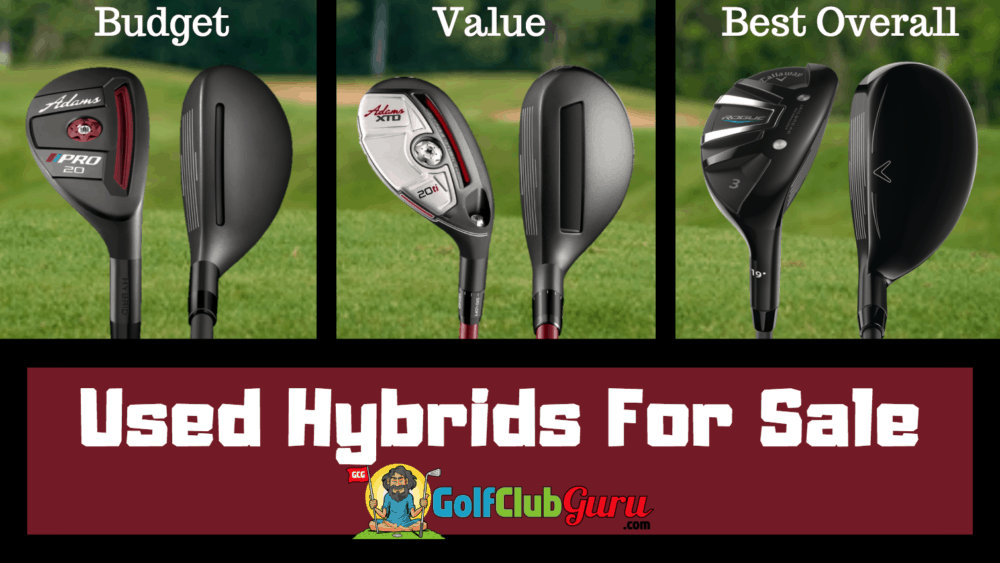 Hybrids and wedges are the only two golf clubs that I will ever buy new, as they don’t cost a ton of money to begin with. However, I’ve bought my fair share of used hybrids as well, as I still enjoy saving money when I can, especially on used golf clubs.

Note: any links/pictures that you click on will take you to the respective eBay page for the used hybrids.

Here is what we are going to be looking for in used hybrids:

In this article, I’m going to be talking about some great used hybrids for sale that you can buy today. Depending on your budget, here are three different options that you should consider.

You truly can’t go wrong with an Adams hybrid, and this Adams Pro hybrid is no exception. Originally priced at $200, you can now pick them up brand new for a quarter of the price, which is an absolute steal! The appearance and performance of this hybrid is top notch, and part of me feels like I should just stop with the article at this point. Considering that it is the lowest priced model that I would recommend, it performs way better than it’s price tag would make you believe.

Personally, I am a huge fan of the more compact design. Other hybrids are a little too bulky for my preferences. The most famous feature of this club is their patented “upside-down” design, which raises the moment of inertia and decreases the center of gravity. That combination leads to super easy launches, so it’s perfect for those that have trouble getting the ball in the air. For improved ball speeds, they incorporated a velocity slot on the top and a cut through slot on the sole to allow the face to rebound the golf ball at the fastest speeds possible.

If you want a preowned hybrid that is just a tad more forgiving on mishits, the Adams XTD Ti is a great option. This one is adjustable and a tad longer than the Adams Pro, but it is a tad more expensive as well, so you’ll have to decide if the extra cost is worth it for your game. Personally, I would buy the Adams Pro hybrid if I was on the market for a new one, but that’s just me.

This hybrid was one of the hottest releases many years ago, originally costing $300! Like the Pro, it has the Cut-Thru Slot Technology (for more ball speeds) with a super low center of gravity for higher launch angles and ball flights. By buying this hybrid in used condition, you’ll end up spending well under $100!

Adam’s “FastFit adjustability system” allows golfers to increase or decrease the loft of the club by 1.5 degrees, which can be very convenient. Considering how long this hybrid is, you might find yourself increasing the loft, which will in turn make the club a little easier to hit high and straight. Odds are, you’ll end up changing the loft pretty often, so it could be well worth the extra money compared to the Pro model.

If you truly want the latest and greatest hybrid for forgiveness and distance, then the Callaway Rogue is definitely the best pick. It’s the first hybrid that has implemented Callaway’s jailbreak technology which has made clubs more forgiving and longer on perfectly struck shots AND on mishits. The two solid bars behind the club face give the club more weight where you want it most… spread across the clubs face, not just the dead center of the face.

Jailbreak technology + a super hot face + a low center of gravity makes the Callaway Rogue hybrid potentially the best performing model of all time. I would recommend getting a hybrid with slightly more loft than you would expect, as this club will travel too far and result in a large distance gap otherwise.

By purchasing this used hybrid, you’ll save tons of money compared to buying it brand new. At the time of this writing, it’s still the hottest hybrid on the market, but the used ones in good condition are roughly $100 less than brand new ones.