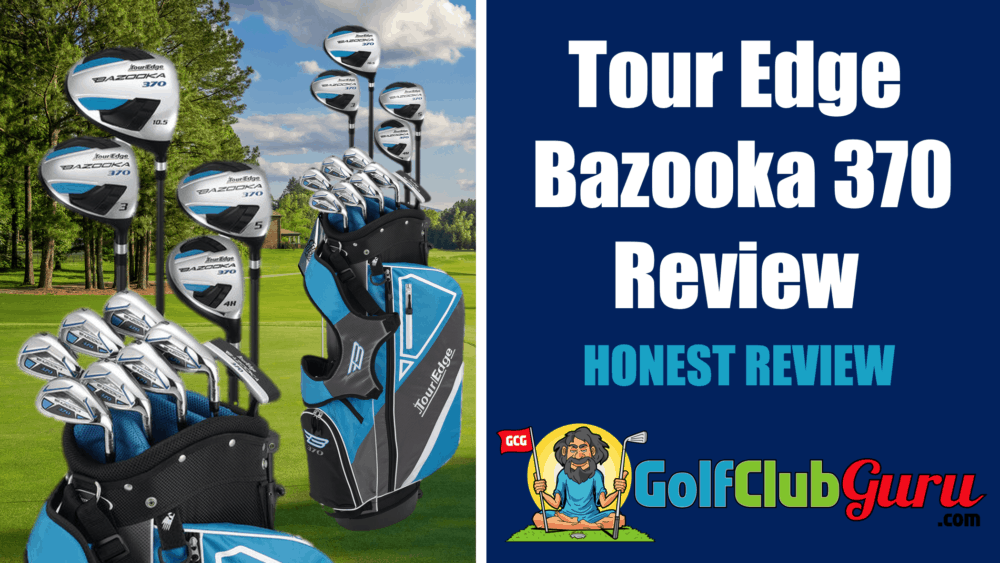 Finding a set that’s forgiving while also providing a huge amount of control is key for you to keep on hitting those fairways and greens. The Tour Edge Bazooka 370 complete set of golf clubs is not only going to offer you those things, but do so at a pretty decent price compared to others on the market.

This set is available in both left and right hand models, so no need for some of us to feel left out of the fun. What you get here is a driver, 3-wood, 5-wood, 4 hybrid, 5-SW irons and a putter. In other words, a complete set.

Crafted from graphite, they contain a low-profile design while the long distance irons come with a larger design than previous versions. Also, Tour Edge have sought to increase the size of the sweet spot making it easier to get a cleaner strike than ever before.

Regarding the woods, the face is oversized without it throwing out the general balance of the club. They also come with a 15 and 19 degree loft and, once again, the weight is spread throughout the perimeter of the head providing a greater sense of control throughout the strike.

Moving onto the hybrids, then they are designed to eliminate that difficult shot between woods and long irons. Anybody new to golf will only be too aware of the issues of correct club selection within this area, so this 24 degree hybrid solves that problem in an instant. Its low design and center of gravity will, once more, balance out the shot providing a clean strike no matter your lie.

The set of irons is where the Bazooka 370 set really stands out. With stainless steel heads come with a larger than normal cavity under the head when compared to other irons. As a result, it boosts that sweet spot making it harder for you to slice or pull your shot.

The putter also comes with their own anser-style design offering greater alignment and boosting your putting ability. Once again, balance is everything allowing for smoother movement, making it easier to keep that ball on the putting line.

Performance is everything, and this set won’t let you down. The ultra thin face allows for greater speed upon striking while it also leads to a higher launch. Getting that ball off the ground will certainly become a whole lot easier. When you then add in the loft angle being very favorable, then the ball is going to lift off the ground with ease helping to reduce the odds of scuffing your shot.

Also, the heads come with a lower center of gravity courtesy of a shift in weight positioning. This is very apparent in the driver with the weight carefully located in the heel and toe meaning it’s focused around the perimeter of the head. This is a process repeated throughout the woods providing you with both that greater control as well as being more forgiving when striking off-center.

With a deeper and larger cavity, it means those shots that are hit off-center will then act more like the perfect strike no matter if you strike more towards the toe or heel of the club. Also, the cavity is known to reduce the ability of the club head to twist through the strike offering more control over the direction of the ball. Considering this is a huge problem for those still mastering their swing, the fact that these clubs are specifically designed to eliminate that issue is huge.

As this set is so forgiving, it does mean that the Tour Edge Bazooka 370 is ideal for both new and intermediary golfers. Also, the price range brings it into the more affordable range considering the number of clubs that are included.

For us, the key here is the way in which they offer that increased control over your shot. When starting out, you need that additional help in order to reduce the chances of those wayward shots landing you in trouble.

You need to be able to focus on mastering the basics of the game and feeling comfortable in your swing. You don’t need to worry about pulling your shots and constantly ending up deep in trouble, so these clubs are going to play an important role in pulling those potentially wayward shots back towards the fairway thanks to their balance and providing one of the largest sweet spots around.

Even though we already feel that this set is affordable, there are some better value alternatives out there on the market, and we have selected one set that we feel stands out from the others.

The Wilson Golf Ultra set will represent value for money, but if pushed for cash then we would recommend the 2015 set in order to cut costs. While the driver makes it exceptionally easy to strike the ball, the irons are also not that bad either. Wilson made accuracy a huge thing with the production of this set, so they are also quite forgiving should you miss that sweet spot when striking.

As the set also includes a putter, and since this is where shot numbers can creep up, then it’s good to know that the Wilson putter sits comfortably in your grip while also being easy to control.

But why the 2015 set? Quite simply it’s down to one reason, the cost. Even the 2016 models are more expensive, and we are talking about at least $100 difference for what are effectively the same clubs doing the same things.

In our opinion there’s no doubt that the Tour Edge Bazooka 370 set represents value for money for the new or intermediate golfer. The larger sweet spot and its forgiving nature should make a difference in your game and do so without breaking the bank. However, if you still feel that the cost is too high then check out our alternative solution.

So, what do you look for in a set? How do you feel about the importance of cavity backs as opposed to other designs? Comment below to share your experience.