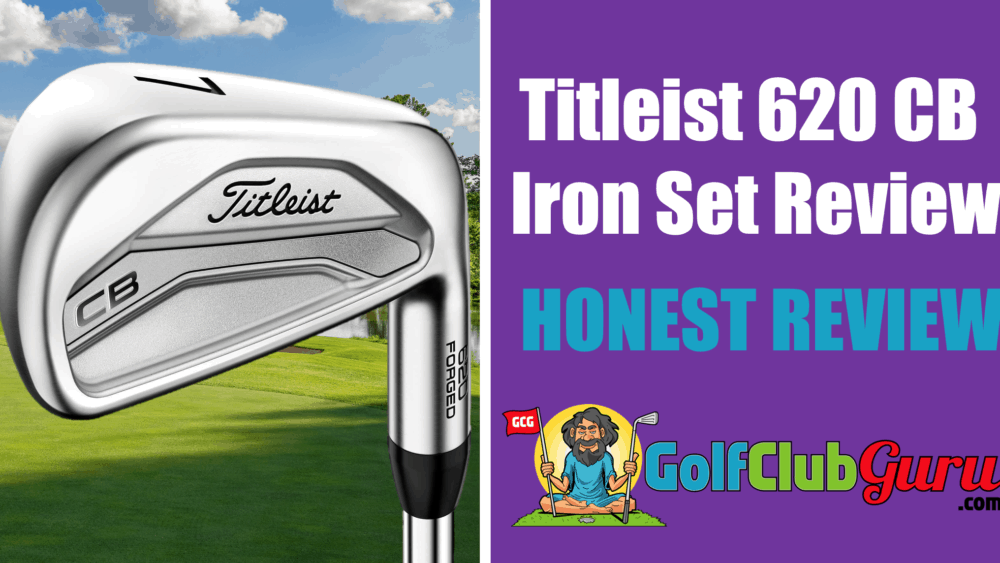 Titleist is the brand where you rightfully expect each item developed by them to be right up there as one of the best on the market. However, with so many products available, we need to examine them individually, and it’s time we do so for the Titleist 620 CB irons.

First, the appearance of these irons are a classic design that screams out a Titleist players iron. Of course, the design is known to work with these CB irons, so why bother changing anything?

One of the first things to point is that the short irons come with a shorter blade length while the longer irons come with a longer blade length. This is deliberate and not unusual in its own right. Also, they do come with a cavity back design (hence the “CB), which is kind of easy to spot when you look at the name, and this is also a classic way of doing things. A little perimeter weighting never hurt anyone, did it? It’s more forgiving than a blade, but still offers great feel and control for better golfers.

As they are cavity back designs, it does mean the weight of the club head is pushed more to the perimeter while still offering real balance to the club. Also, Titleist have sought to create a lower center of gravity with these clubs with this further accentuating the balance of the iron in general.

Overall, these irons don’t look anything special. However, looks can indeed be deceptive as you find out when you move onto their performance.

You would be well within your rights to expect a significant performance boost thanks to these Titleist 620 CB irons, and that is exactly what you will get with this set (depending on what you are coming from, of course). However, we need to mention something specific, and it’s to do with the 3 and 4 iron in the set.

With the 620 CB irons, Titleist has added some tungsten weighting to both the 3 and 4 iron. This is then further accentuated by the irons having a thinner topline. As a result, these long irons are less forgiving than irons aimed more at the new golfe, which does mean Titleist are looking at the more precision based golfer with these irons. If you struggle with long irons, you can simply replace these 3-4 irons with a hybrid. Easy does it.

In saying that, the short irons are relatively straightforward to control no matter if you are looking at laying up or aiming for the green. In the case of the 3 and 4 irons, it’s felt that the inclusion of tungsten into the make up of the club adds to the improved control. If that’s the case, then why it wasn’t included across the rest of the set is a question to be asked.

These irons are only really going to perform well for those individuals that don’t have trouble with their swing on a regular basis and produce less twisting of the club throughout the swing action. The level of forgiveness with these Titleist 620 CB irons is less than you may expect elsewhere which is why we are talking about pure accuracy no matter if you are using a long iron from the tee or looking at hitting that second or third shot into the green.

Compared to the new Titleist irons, the 620 CB irons are less forgiving than the T100, T200, T300 and T400 irons, but offer better control and feel at impact. However, the 620 CB irons are MORE forgiving than the 620 MB irons. Distance wise, they are all pretty much the same when hit on the center of the face, with the exception being the T100-S irons being longer than the rest.

Even Titleist themselves state that this set of irons is going to be for the purist, and it’s easy to see why. With this set, Titleist is aiming it at the more experienced golfer who has more control over their shots and are on the lookout for irons that are more responsive.

If you want most of the benefits of a blade (control, feel, and feedback at impact) without actually gaming a blade, this is the set for you. It’s like a blade but with a little more forgiveness.

If you are still struggling with keeping to the fairway or judgment of those middle irons into the green, then the 620 CB irons set won’t help. In fact, it will only further expose those issues, and nobody wants that to happen to them.

The design, performance, and technology included in this set, along with the price, does eliminate this set as a possibility for those starting out. If that’s you, then we recommend looking elsewhere.

However, there are alternatives out there. One alternative that we recommend is a used set of older Titleist CB irons. Consider the 714 CB irons, which can be purchased for around $300-350 in good condition.

A used set like this is going to cost you a fraction compared to the Titleist 620 CB, but these irons are practically the same exact thing. If you want brand new clubs and have the money for  the 620CB, great. If you don’t, consider an older model. They will still provide you with the same feel and control, but if you go back a few years then you will be able to save yourself a small fortune.

The Titleist 620 CB irons are expensive, but you do at least know that you are buying quality irons. However, with this price they aren’t the best choice for novice or relatively inexperienced golfers. Instead, we strongly recommend checking out our better value alternative. They will pretty much deliver the same kind of outcome with only subtle differences. Also, the price difference is going to prove to be pretty substantial.

Let’s Hear From YOU

So, what do you think about irons that are aimed more specifically at the experienced golfer? Does it make a huge difference to your game after even trying out a set such as the 620 CB irons? Let us know below what you think.