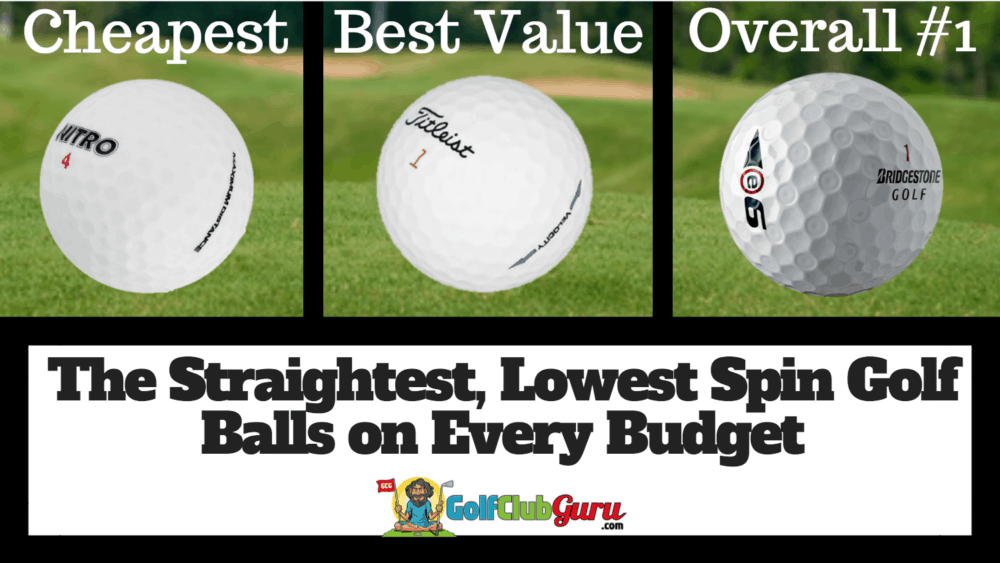 Tired of hitting wayward shots? Decided to blame the ball before your swing? It’s always the arrow, not the Indian, right? 🙂

In all seriousness, some golf balls are meant to go straighter than others! You might think that these golf balls are probably the most expensive ones, though, right? That would make sense, because everyone wants to hit the ball straight, right? The good news is… these balls are actually the lower end, less expensive balls on the market!

How is that right?!? Well, the balls that go straight are the lowest spin golf balls. These balls are hard; they don’t feel as great at impact. Some might say they kind of feel like hitting a rock! However, the harder the golf ball, the less likely it is to curve.

The softer the golf ball is, the more expensive they are. That’s because better players prefer and NEED the soft feel and extra spin on some shots to shoot their best scores. For you high handicappers and beginners, though, you just need a hard ball that will travel long and straight. You are not worried about getting more backspin on chip shots. You just want the straightest golf ball on the market, right?

Let’s talk about some characteristics of the straightest & lowest spinning golf balls:

Let’s start talking about the straightest golf balls that you can buy today. To begin with, golf balls vary greatly in price. With each price increase, you will typically get slightly longer, better feeling, consistently straighter balls. For that reason, I would buy what you can afford.

If you want the cheapest option that is still very low spin, then the Nitro Maximum Distance Balls are perfect for you. They are the cheapest ball that you can find that is designed to go as straight as possible. You’ll end up paying far less than $1 per ball, which is a steal for brand new golf balls.

These balls will be very poor when it comes to spin, distance control, and feel, but that probably isn’t too important to you. This is a two piece ball, similar to the two other balls in this article.

Its aerodynamic dimple design increases lift while decreasing drag and backspin in the air. Ideally, this should lead to drives that don’t curve very easily.

If you can afford it, though, I would suggest getting one of the two balls listed below. They will perform even better with straighter drives and less spin than the Nitro balls. If you can’t afford it right now, save up by buying the Nitro golf balls. Once you save enough, get a lesson instead of paying for more expensive balls!

Odds are, you have heard about the Titleist brand of golf balls. They are known for producing the greatest and most popular (and expensive) golf ball of all time, the Pro V1 and Pro V1x. However, Titleist another very popular model called the Titleist Velocity golf balls targeted for those looking for straight, long shots.

Will these balls feel great at impact? No. Will they stop easily whey they hit the green on approach shots and chip shots? Again, no.

However, for the best mix of price, straightness, and distance, these balls will surely help your game! I have a theory that just playing with a Titleist ball will take a couple strokes off your game on average, because it just makes you feel like you are truly a golfer!

Anyway, I’ve hit the Velocity balls many, many times. It was one of my favorite balls when I was working my way from a high handicapper to a mid handicapper. It’s long… and it’s straight. If you can afford it, I suggest you pick up a couple dozen!

Price wise, it is less than half the cost of the premium golf balls. Considering its performance, it is easily the best value golf ball that will fly straight and not spin much.

Before even having the idea to write this article, I’d say that i was pretty knowledgable about golf balls to begin with. I knew Bridgestone had a ball that they marketed as the straightest ball in golf, but I am always very cautious when I hear claims like that. Anyway, I always do a few minutes of research on articles that I don’t feel 110% about providing the most value from the get go.

When I was researching the topic of the straightest, lowest spinning golf balls, I came across this thread on GolfWRX. Check out just how many times they mentioned the Bridgestone e6 golf ball. I honestly couldn’t believe it was getting so many positive reviews, but there must be merit to it. I played with the ball many times when I was first starting out, but no memories really stand out to me personally.

As you might be able to tell, this ball is CLEARLY the absolute best ball for hitting the ball straight. If anyone (looking at you Bridgestone!) wants to send me a sleeve of these ball, I would 100% do an in depth review of these balls. I’ve never done one before but I would be very interested in doing my first one with this ball.

The e series of golf balls is about the same price of the Titleist Velocity golf balls. I originally planned on having the Velocity golf balls in this spot, but decided last second that the e6 should clearly have the top spot after so many great reviews. I will say this though: it is a little harder to get then it used to be. They must not be making as many any more. You can still find them on Amazon at the time of this writing, though!