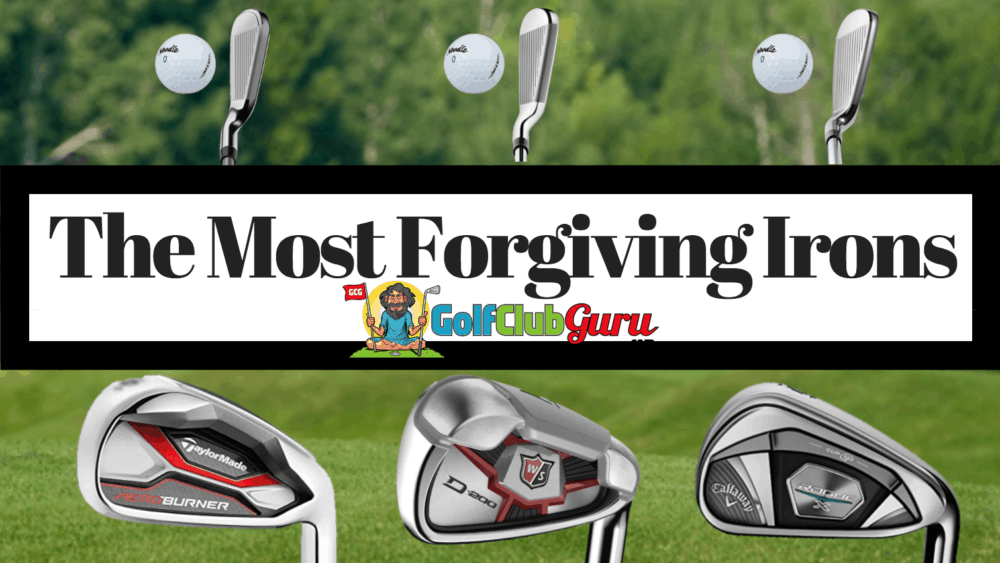 The Most Forgiving Irons in Golf

There is a balance when it comes to golf clubs. It’s always a give and a take. A ying and a yang. Some good and some bad. Pros and cons.

For example, a golf club that is super forgiving is typically not going to have great distance control. You might find that you cannot truly dial in your distances, as some shots fly plus or minus 5-10 yards. So you might have your 150 club (let’s say a 7 iron) end up going anywhere from 140-160 on the same strike. That is simply what you are giving up to have a more forgiving club. However, your mishits are going to end up OK. That’s the benefit of forgiving irons. Mishits aren’t penalized as much, because the sweet spots are much larger and the weighting is distributed more evenly across the clubface.

On the other hand, a golf club that is NOT forgiving, like a players iron or a set of blades, has great distance control but little forgiveness. That means that a golfer has to hit the center of the clubface consistently to get the benefits of the irons. If they don’t, then their mishits won’t end up very well. That’s why only better players use players irons and blades. No one should be using blades unless they can hit within a dime of the center of the club face consistently, because even slight mishits are going to be penalized by a loss of distance. However, the distance control is incredible if you keep the balls on the dead center of the face.

Full disclosure: all links/pictures that you click on below will take you to the respective listings on eBay for the irons. I get a small portion of anything you buy there. Thanks! 🙂

If you don’t want to spend much money, you’ll have to get a cheaper set of clubs. That makes sense. However, you don’t have to get some terrible off brand irons that will likely break within a month. You can still get a high quality, big brand set of irons for a decent price. You’ll just have to find a set of irons that is a little older; one that was released 5+ years ago.

You should be looking for a set made by one of the lower tier golf brands, like Wilson. They have released TONS of different models of forgiving irons in the past 10 years, and each set is pretty similar.

My personal pick would be the Wilson D-200 irons, as they have large toplines (a good sign for a forgiving iron) and great weight distribution across the face. The clubhead itself is very large when it comes to width and tallness. That’s another great sign, because the sweet spot is bigger than most.

As I have mentioned in another article, Wilson is one of the most underrated brand in all of golf, so rest assured that you are getting a good deal on these irons.

I’m always on the lookout for the best value golf clubs that money can buy. Just check out my Best on a Budget golf series that I take a lot of pride in.

For forgiving irons, the best value set would be TaylorMade’s Aeroburner HL irons.

The TaylorMade Aeroburner HL irons have thick, forgiving club heads, and launch the ball very high. If you have trouble getting enough air on your shots, these are the clubs for you. The perimeter weighting around the club is a huge factor that makes this club face so forgiving. When you mishit the ball, which you definitely will, the feeling and sound won’t be as great, but the result will be pretty similar compared to a center strike.

The “HL” in the name simply refers to high launch. The weighting of the iron head is simply made to get the ball airborne as quickly as possible. This is great for less spin and more distance on iron shots.

This set was released a few years ago, so it is a great value at the time of this writing.

The Best Forgiving Irons That You Can Buy:  Callaway 2018 Rogue X

If you want the best of the best and the latest, greatest iron sets, check out the Callaway Rogue X Irons. These are the top of the line forgiving irons that you can buy right now. The name of the game is consistency across the club face. No matter where you hit it on the face, it should fly pretty decently compared to the center of the clubface.

Distance control can definitely be a problem, as with other game improvement irons. However, as a mid to high handicap, you are probably more interested in forgiveness than distance control, am I right?

Sure, the Callaway Rogue irons are a tad on the expensive side, but they will last you a long time and probably lead to longer, straighter irons shots compared to the irons you play now.  Plus, they are still way cheaper than other brand’s overpriced irons. I’ve always been a huge fan of Callaway game improvement irons, and these are yet another example of why. They just consistently produce great quality irons for those that struggle with ball striking.